People have been brainwashed into thinking that buying larger quantities saves money (especially near Christmas).

One example: last week in Aldi I noticed boxes containing 12 cans of Galahad Lager were on sale priced £6:49 I also noticed many shoppers had abandoned the four packs (price £2:15) at that display to take the boxes. I know it isn't much but why pay four pence extra then have to go to the trouble of getting rid of an empty box (fit for little else).

Any more you've noticed? I'll tell you of the worst example I found down below,

davidstockport
2 years ago
What do you think of this?

Love this, some people not good at maths or if they added promotion next to the item is most likely to sell more. Made me laugh, hilarious

I always think if it is a good run for the money. Some things worth buying like cereals, freezing items however others you will end up chucking them in the bin and that is waste of money.

I was typing my worst example (below) as you were posting that. Incidentally I don't drink much - but (it's after three in the morning) am just about to have a can of that Galahad lager it's exceptionally good, don't let the low price put you off, But unless you like empty boxes buy in packs of four.

The worst I found was in Tesco a few years ago. I can't remember the make but it was cans of alcohol which were in packs of four priced at £3:50 with a "buy two get third free" offer on. Right next to it was in a very prominent "special offer display" boxes of 12 for £10. (which to the casual observer appeared to be a 50 pence saving).

I had a word with the manager pointing out the anomaly he just shrugged and said "people have to be careful in here" he wasn't too happy when I explained to anyone I saw with the boxes in their trolleys that they could save £3 if they took the "special offer" boxes back and took 3 four packs instead,

Some shoppers thanked me but a few looked at me, as if I'd gone daft, and said "you can't be right".

I've not been in Tesco since - I didn't buy any drink either.

I find as I get older that I find my levels of tolerance are much lower. Although I try hard not to express this frustration toward the culprit by word or deed, I do, internally shrug, roll my eyes and tut tut. This is one of those times, when people cannot even work out very basic maths.

Asda currently has 6 for £4 on Heinz soup but the 4 pack is £2 so if you buy 2 multipacks you can get 8 cans for the individual offer of 6.

I always look at the price per unit or ml label. Potatoes can vary massively per kg too this week it was roughly 48p per kg on packed and £1 per kg on loose.

the supermarkets are devious when it comes to this, and they have been at it for ages! I remember when I was a student picking up some drinks for a party at Sainsbury's - a 4-pack of 2 litre cokes was £5, whereas one bottle on its own was £1...I could not believe it

This "the more you buy the dearer things become" scam isn't restricted to supermarkets this is a flyer that came through my letter box. 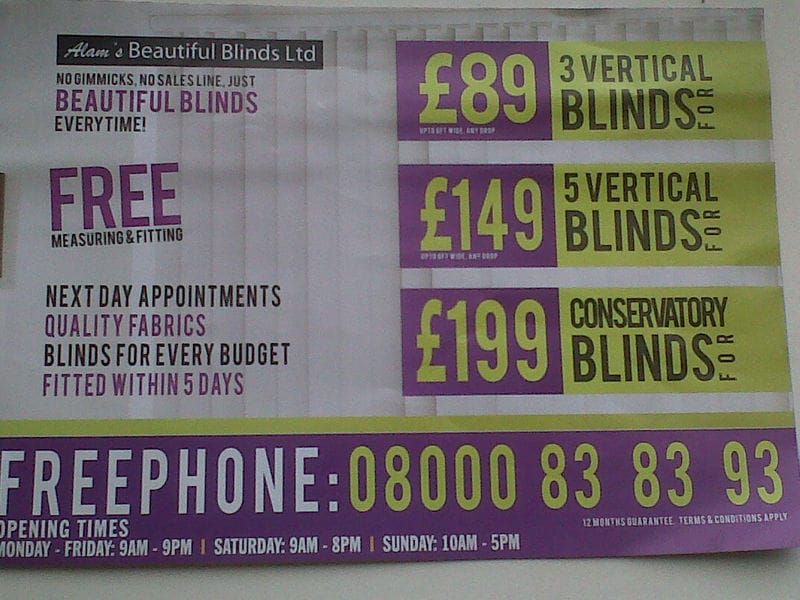 If by chance you didn't notice... the first three vertical blinds work out at £29:66 each the the price increases to £30 each for the next two.

They lost a sale... I wouldn't buy from a company that either tried to rip their customers off or whose mathematics were so bad I couldn't trust to measure up correctly.