Had a de-clutter and moved to a 'house' but things are just the same, a smile a day

lilyflower
a year ago
What do you think of this?

lilyflower Ooo, this is a mystery for me at the moment

My memory sucks, so my brain is not computing, and after the celebratory wine tonight, I'm a bit more confused.

trude76 I remember you now! Welcome back.

Morning Lynibis Ann1984 MrsCraig Jasmine111 sunny101 gerrykelly25 trude76 David1983 TheChimp After the lovely sun what a downpour we've just had, sending you all a smile

Two friends met at the local supermarket. When they got to the checkout one of the ladies started rummaging through her handbag for her wallet and she took out a few things, including a TV remote.

“Do you always take the remote with you when you go shopping?” her friend laughed. “No,” the woman answered “But I asked my husband if he wanted to help me shop and he said no. I asked him if I could take the car and he replied that as long as I left him the TV, I could take whatever I wanted and get out of the house.

So I selected the fashion channel and told him he had nothing to worry about.”

trude76 Oh it's not cool, it's hot and muggy the ground is steaming, dulled over again so probs another shower on i'ts way.

Was up all night listening to the heavy rain here in SW Wales.

Was supposed to have a takeaway curry yesterday, but MrsChimp was poorly.

But she's better today, so it's a hot chicken dhansak, keema naan and some Bombay potatoes for me later

Have a good day everyone

TheChimp you too hun enjoy the curry x

It has been quiet here of late? Hope everything is okay lilyflower? 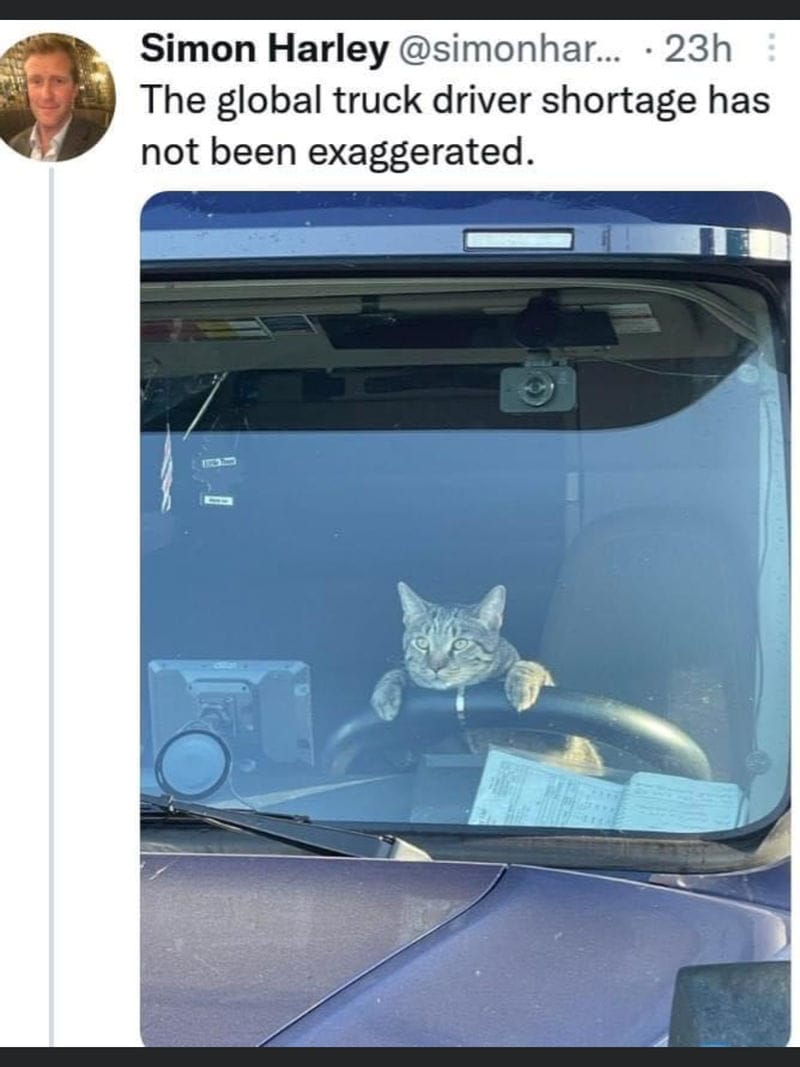 ) I'm well but the weather has been very humid and draining hope everyone else Ann1984 Lynibis sunny101 Jasmine111 David1983 MrsCraig trude76 is ok. TheChimp how is the eye? A late smile

A vulture and his wife are going on vacation to the Bahamas.

With many large suitcases packed, they arrive at the airport and saunter up to the check-in counter.

The agent weighs, tags, and sends each bag off, until she notices one giving off a foul smell.

"Sir, are you checking this bag?" The agent asks.

"No, sorry, that's our carrion"

That one made me chuckle! You seem to be winning a few competitions so you must be doing something right!

Tom Kelsey are we going to have an Advent/Christmas 'section' in Competitions/Vouchers this year as the items are staring to arrive in email boxes/magazines etc?

Oh yes please. They have one on ‘that other site’ which I always found really helpful.

Had a busy few days. How has everyone been Lynibis MrsCraig sunny101 Jasmine111 David1983 gerrykelly25 Ann1984 TheChimp - how are the eyes? Harvey? Have a late smile

A guy starts his holiday in France at a popular restaurant. He opens the door then suddenly stops, but he sees a man walking towards him.

He gestures to the door and says, "Ma dam-" but the gentleman cuts him off. "It's Monsieur." And the man walks off looking annoyed.

Thankfully a different man started walking towards him and he points to the door and starts again "Ma dam-" but again he's cut off, "It's Monsieur, you stupid Englishman." And he keeps walking.

Finally a staff member from the restaurant comes to the door and says, "Monsieur, you are scaring away our customers and I'm afraid I have to ask you to leave."

The man says "I can't! Ma damn sleeve is stuck in the door!

Evening TheChimp I'm still around, but as MrsCraig said elsewhere having a few rough days, I always find this week rough with current and deceased birthdays. Harveys pups look lovely. How are your eyes, do the new specs help? A late smile for gerrykelly25 sunny101 Jasmine111 trude76 Ann1984 David1983 Lynibis ShellyAnn - not interacted with you for a while

It was a rainy night in old Dodge City.

Suddenly, a horse comes bursting through the swinging doors of the silver dollar saloon.

The startled bartender looks up and shouts, "Hey!"

The horse replies: "and a side order of carrots"

lilyflower Good to see you back

Hope that you feel better in the near future.

Optician has told me to see the doc again.

Hopefully we will get another smile from you tomorrow

What do golf and sex have in common?

TheChimp telmelThis is for Golfforall I get the feeling he's feeling left out, so welcome to chit chat

A man got on a bus, with both of his front pant pockets full of golf balls, and sat down next to a beautiful blonde.

The blonde kept looking quizzically at him and his obviously bulging pants.

Finally, after many such glances from her, he said, “Its golf balls.”

The blond looked at him compassionately and said, “Oh you poor thing. I bet that hurts a whole lot worse than tennis elbow?”

You are a naughty lady L

Are we allowed rolf harris jokes on here ?

I dont want to offend anyone

You go for it telmel What's the worst that can happen

I saw Rolf Harris at the airport the other day, about to board a flight to Orlando. Are you going to Disneyworld? I asked him. No , he replied..

I'm going to Tampa with the kids

Doc, I can’t stop singing the ‘Green Green Grass of Home’. He said: “That sounds like Tom Jones syndrome.” “Is it common?” I asked. “It’s not unusual” he replied.

A priest, a rabbi and a vicar walk into a bar. The barman says, “Is this some kind of joke?”

I was in Tesco’s and I saw this man and woman wrapped in a barcode. I said, “Are you two an item?”

And just going back to a chess joke, last one i promise

I was having dinner with Garry Kasporov (world chess champion) and there was a check tablecloth. It took him two hours to pass me the salt.

Did you see Beth Harmon is suing Netflix for their portrayal of her in the Queens Gambit?

I couldn't find my luggage at the airport baggage area, so I went to the lost luggage office and told the woman there that my bags never showed up.

She smiled and told me not to worry because she was a trained professional, and I was in good hands.

"Now," she asked me, "has your plane arrived yet?"

I don’t get it

gerrykelly25 She smiled and told me not to worry because she was a trained professional, "Now," she asked me, "has your plane arrived yet?" It must have if he was looking for his bags. He then gave a facetious reply.

lilyflower sorry! I wondered why she asked if his plane had arrived.......

The employee just said she was a trained professional

Then she was asking if her plane had landed, it must have as she was talking to her

Its one of those subtle jokes G , i liked it

You beat me to it L

A priest, a pastor and a rabbit walked into a blood donation clinic.

The nurse asked the rabbit “what is your blood type?”

Morning from a dull and damp NE. What are you all up to today MrsCraig Jasmine111 trude76 Lynibis sunny101 ShellyAnn Ann1984 David1983 TheChimp telmel not forgetting Golfforall My OH is on the holiday search again - he will be going somewhere. Smile of the day

sorry TheChimpit's a long one.

The bar manager was always talking about physical strength. He boasted that his weekend bouncer was the strongest man for many miles around. He said he was SO certain that he had a standing offer of £1000 to anyone beating the bouncer in a simple trial of strength. The challenge was that the bouncer would squeeze a lemon until all the juice ran out into a beer glass, then hand the lemon to the customer. At £10 a go, anyone who could squeeze even one more drop out of the lemon would win the £1000. Over the years many people had tried - truck drivers, weightlifters, rugby players and professional boxers to name just a few. All had failed.

Then one day a geeky little man with heavy black rimmed glasses came into the bar and asked if he could try the challenge. After the laughter had subsided the landlord said that it was only fair that the man be given a chance at the bet and took the man's tenner. The bouncer picked up a lemon and started squeezing. Once he was done he handed the remains to the little man who promptly squeezed out 2 more drops of juice onto the beer glass! Everyone looked on in amazement as the landlord handed over the prize and asked "What do you do for a living that has given you such incredible strength? Are you a construction worker, ship builder, circus performer, Mixed Martial Arts fighter, what?"

"Nothing like that" the man replied, "I work for the Inland Revenue!"