What do people reckon about this? Is Little Britain a potential cause of racism and does it offend people in the many groups portrayed? Maybe you are someone who is offended by it

As a viewer, are you racist or prejudice for finding it funny? Let's not get bogged down with whether you're a fan or not. That's not the discussion here.

Dennab
1 month ago
What do you think of this?

Probably a dodgy subject but suffice to say for most of the 21st century I have lived with the constant worry of saying or doing the wrong thing when it comes to every ism that exists. I feel as if I am personally responsible for historic wrongs and for every person who has suffered feelings of injustice. I am not disabled, BAME or gay and although getting on have thus far not experienced ageism.

Is it wrong to be 'normal'? Is it not enough that I treat everyone I meet with the same respect? I am beginning to think the answer is no and I am now a minority and must somehow 'pay' for the world's injustices.

Sorry to have gone off topic Dennab

Lynibis No that's a great response in my opinion and also the way I'm thinking. It seems those of us who have not been affected by prejudice in any form are not doing enough by simply getting on with our lives and treating others as we want to be treated. I enjoyed Little Britain but does it make me a racist? I don't think so. Should I have supported it by watching? In hindsight, no.

Dennab I don't know your age but this is all part of ongoing change and the stuff I remember was probably worse. Love Thy Neighbour? But that was deemed ok back then, it isn't now and that is as it should be. We hopefully move on and learn. Hindsight is a wonderful thing but all the actors obviously had no problem with it then.

I heard Martin Luther King Jnr said nothing has changed since his dad's time. Well that is blatantly not so, has he not heard of Barack Obama? Someone I admire greatly and would love to meet him and his mrs. If change was instant there would be no wars still raging around the world.

Lynibis Sorry I do maintain a somewhat mysterious presence on here. I'm younger than yourself but agree we can all move on and learn.

I wrote on the chat thread about this being taken off TV. I bet you over half of these protesters have watched it. It's harmless humour I said same about love they neighbour too Lynibis will that never be shown again. And that boxer aj saying don't buy from white people am sorry I just don't get all of this blm. Am not racist and everyone is the same but its gone abit crazy same as the statues they part of history whice kids are tought at school people come to see.

Ann1984 I was thinking about the statue situation today and how the Winston Churchill one was vandalized.

Back the original question, times have changed, but I don't feel like a racist for watching it. The same goes for Bo Selecta.

TheChimp and Keith lemon done a public apology it's a little humour. Sadly it be boring TV comedy from now on.

Ann1984 I disagree with that latter point. Comedy always evolves with the times. Plenty of comedians manage already without having to take the mick out of any particular race / sex / religion. Look at Lee Mack, Peter Kay, Tim Vine... The list goes on! A lot of old comedy is still 'acceptable' now. Even the Harry Enfield show would be politically correct in this day and age and that's over 20 years old. Life would be very boring if we didn't evolve and try to do things a different way.

TheChimp Bo Selecta was brilliant. The point of all this is are we not being open minded enough? I don't see myself as racist either but everything I have seen and read over the past week got me thinking. Do we need to talk about it more and recognise that programmes like that should have not been seen as 'normal'?

Dennab I mean, how far should this be taken?

Should the Asian comedians in Goodness Gracious Me be criticised for doing the 'Going for an English' sketch.

After all, that was using a stereotype of white British people?

TheChimp I fully agree and that's one reason I've created discussion around it. There are two issues here - are we thinking the wrong way and how far does it go? I don't know.

Dennab If we're talking about flat out racism, what do you think about what Anthony Joshua has said?

TheChimp I haven't seen it but read that his words had been taken out of context.

TheChimp Ah I see, regarding spending money in 'their' shops you mean? I see the stupidity in reading that comment out but he didn't write it and I think it's a little bit open to interpretation. I'm on the fence with that one!

Dennab I could read dialogue from Tommy Robinson or Hiltler in front of a National Front crowd (or whatever their called these days), and I could say that it wasn't 'my' speech.

Just because the words were written by someone else, doesn't mean that you aren't responsible if you're spouting them with intent to cause trouble.

TheChimp True. I just think that based on this particular video, I wouldn't brand him as obviously racist. I personally believe he read that out without thinking about how it would come across and you're giving him too much credit in having any intent to cause trouble. He focussed way more on stopping the whole gang culture, recognising that the behaviour of young black people being violent against each other needs to be stopped. That's what I took from the speech. Maybe between the lines, it was pointing out that such behaviour isn't likely to help the case when they are shouting about their value in society.

Dennab Any intent is intent, you can't just say it's a little intent.

TheChimp TheChimp and now the taken off league of gentlemen I not even finished watching that that was me and oh program to watch chilling in bed it’s gone a bit too far now and it all needs to stop as if we all ain’t going though enough as it is. Not just virus worry for our jobs homes if they won’t to riot and cause trouble do it at there own place

TheChimp Absolutely. I don't think there was any racist intent in his case. I don't like to speak ill of the dead but various media (including social) have done a bad job in making George look like a saint and Anthony the devil.

Ann1984 Watch Inside Number 9. It's the same people and just as ****** up. I'm not sure what you mean about people rioting and causing trouble at their own place. Are they doing it outside your house?

Dennab no I mean if they want to damage stuff do it at their own home. I will give that a watch thank you.

I did not think it was wrong for the statue in Bristol to be removed, I was sickened by the way it was done. I watched a baying mob of all colours surge forward at the point of impact and begin beating a lifeless object with sticks and skateboards whilst screaming and shouting. It made me despair at the human condition and made me think they could have easily turned that way on a living being.

I hate mob rule in any of it's guises or colours.

Well meaning , legitimate protests are fine (whether I agree with them or not ) .

What I don't agree with is that every one gets hijacked by the "rent a mob" crowd who haven't a clue what the protest is about - just out to cause a riot .

Thought a picture told a thousand words at the Oxford protests on Sunday evening :-

Chap with a placard saying "Pull Rodes down " - Yup that's how it was spelt - he obviously didn't have a History degree !

Golfforall There are people at both ends of not being in it for the right reasons. One end you have the violent **** heads who join just because they want a fight or a free iPhone. At the other end, it's the Millennial "save the world" brigade who are there because Twitter said they should be.

Lynibis I agree that video in Bristol showed the excitable muppets who were there just to assert their authority and be part of the gang. They could have just asked for it to be removed like normal, civilised human beings.

Who's going into my topic and editing the title? I find it a bit weird for someone to do that without telling me.

It happens a lot Dennab. I must admit I find it a bit disconcerting too and makes it hard to find again in chat search.

Lynibis It's a little bit like micro management in the workplace and undermining too.

TheChimp Interesting which word got through there.

It has just happened to me again! I titled my topic Fostering, sufficient to decide whether anyone wants to read. But it has been changed to Thinking of applying to foster again, which I will never find in search in a few days time!

I haven't watched Little Britain, but more broadly I'm not a fan of people trying to rewrite history, censorship or pandering to over sensitive individuals. If you remove all the programs that offend at least some people there wouldn't be much content left.

I normally prefer U.S., Canadian and Spanish series so while I've not seen this or Come Fly With Me series are now deemed "racist". There's a thing called dark humor, but nowadays everything is "offensive".

This goes to show why you can't rely on streaming services, because despite that you may "own" what you buy, it's ultimately a rental that can last a few years if lucky.

Btw, Citizen Khan is offensively bad. I don't know how anyone can watch that garbage, it's in the same "comedy" level of Big Bang Theory.

If they tried to pull this nonsense with The Office in U.S. it would backfire. The series was all about sarcasm and dark humor so those who feel "offended" then don't watch it.

Fawlty Towers now (that episode, yes). It's going too far.

Dennab I thought that you were joking until I looked it up.

TheChimp The minute Little Britain was announced to be in the firing line, I said Papa Lazarou would be next but I didn't see this one coming. It's ridiculous.

Dennab John Cleese has gone nuts with the BBC, as well he should.

This is getting even more ridiculous. One of the most famous episodes of Fawlty Towers has now been removed from the UKTV schedules because it contains "racial slurs" - https://www.bbc.co.uk/news/entertainment-arts-53020335

Wow for crying out loud! Some people need wrapping in cotton wool they’re so fragile.

This episode of Fawlty Towers has now been reinstated, but will have a warning about "offensive content and language". This is what should be happening with all the other 'banned' shows. Rather than just removing them - https://www.bbc.co.uk/news/entertainment-arts-53032895

Just stick a warning before every programme on everything saying 'this might offend someone'. 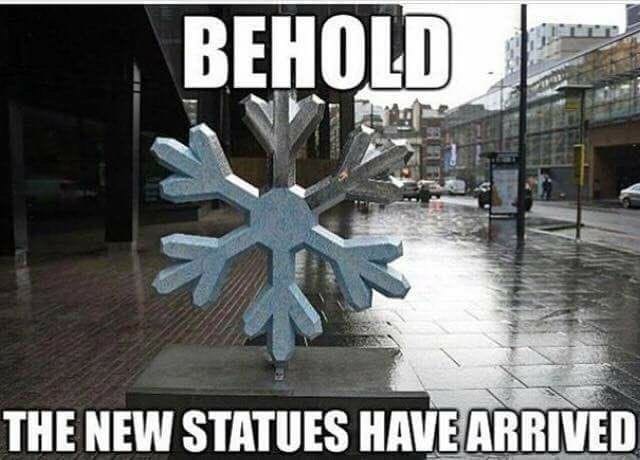 Here's a thought, it's kind of radical. There's a switch on the TV. If something comes on you don't like. switch it to the off position.