The second round of lockdown

In a few days it will begin

So before you all start to frown

Here’s something to make you grin.

A husband and wife were dining at a 5-star restaurant. When their food arrived, the husband said: "Our food has arrived! Let's eat!" His wife reminded him: "Honey, you always say your prayers at home before your dinner!" Her husband replied: "That's at home, my dear. Here the chef knows how to cook..."

lilyflower
4 months ago
What do you think of this?

Dani1 I just read your comment I quick came to my daughter room for writing this comment i am so sorry for the loss of your cousin. My thoughts and prayers are with you and your family take care.

Sanitation1234 ahh you will be very busy then! Glad you are all safe. Take care x

Dani1 I am very sorry for your loss, it is always difficult to lose a loved one. Hope you are coping ol. My thoughts and prayers are with you and your family at this difficult time x

MrsCraig Sanitation1234 and Loislane thank you so much, really means a lot to me xx Hope you all have a lovely day

Dani1 you too lovely lady 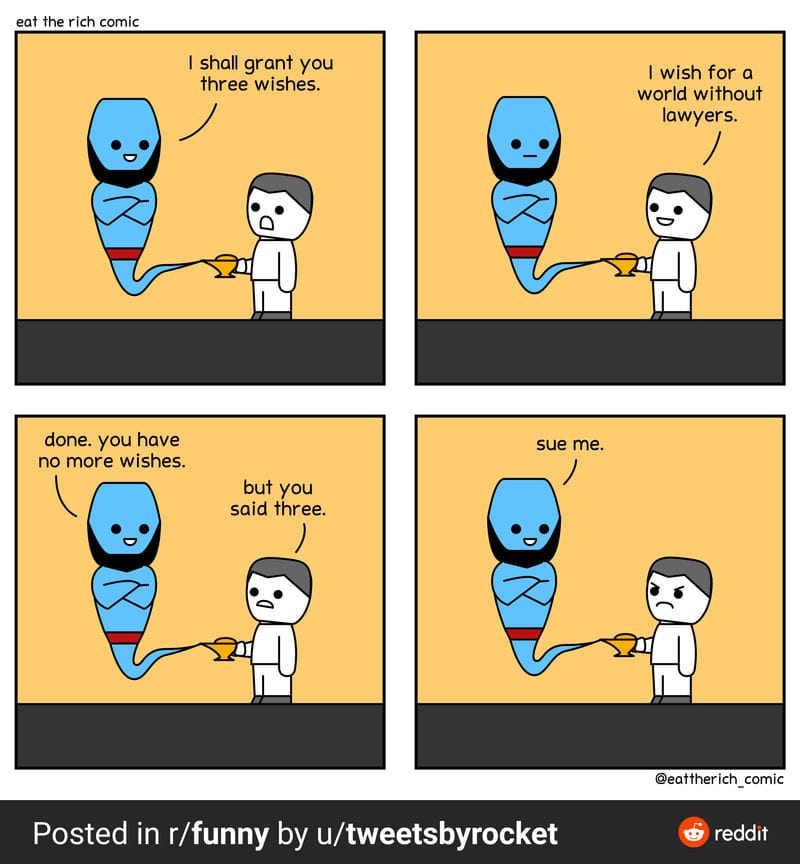 A WOMAN RUBBED A BOTTLE AND OUT POPPED A GENIE. THE AMAZED WOMAN ASKED IF SHE GOT THREE WISHES.

The genie said, "Nope, sorry, three-wish genies are a storybook myth. I'm a one-wish genie. So... what'll it be?"

The woman did not hesitate. She said, "I want peace in the Middle East. See this map? I want these countries to stop fighting with each other and I want all the Arabs to love the Jews and Americans and vice-versa. It will bring about world peace and harmony."

The genie looked at the map and exclaimed, "Lady, be reasonable. These countries have been at war for thousands of years. I'm out of shape after being in a bottle for five hundred years.. I'm good but not THAT good!

I don't think it can be done. Make another wish and please be reasonable."

The woman thought for a minute and said, "Well, I've never been able to find the right man. You know, one that's considerate and fun, romantic, likes to cook and help with the house cleaning, is good in bed, and gets along with my family, doesn't watch sports all the time, and is faithful.

The genie let out a sigh and said, "LET ME SEE THE FRICK'N MAP AGAIN."

Good one! I know it's only a joke but a good conversation could be had on the back of that!

lilyflower Thanks for the joke

Feeling it was time for a shakeup, a company hired a new CEO.‬

‪The new boss was determined to rid the company of all slackers, and on a tour of the facilities, he noticed a guy leaning against a wall. ‬

‪The room was full of workers and he wanted to let them know that he meant business. ‬

‪He asked the guy, "How much money do you make a week?"‬

‪He walked back to his office, came back in two minutes, and handed the guy £1,600 in cash and said, "Here's four weeks' pay. ‬

‪Feeling pretty good about himself the boss looked around the room and asked, "Does anyone want to tell me what that guy did here?" ......‬

Lol, I think we would all deliver pizzas if we earned that much a week. I never earned as much as that the whole of my working life, well, take home.

I hope you're keeping well x

Dani1 I am thanks, and hope you are too. Just came in from working on my fairy garden lol, too hot and tired to do any more!

Lynibis that's great to hear. I'm well too, thanks. Hope you can relax a bit this afternoon after fairy gardening lol

It's lovely and hot out for sure. Just going for a little walk x

Brilliant! 2 more good ones. We have already been in the garden this morning and are learning to play football.

hugs from the east

Loislane you've got a POOL and a garden! I wish.

It's Sunday, another morning without a Lottery win, but hey I've got you lot.

One morning, one man didn't show up for breakfast, so the helper went upstairs and knocked on his door to see if everything was OK.

She could hear him through the door, and he said he would be down shortly so she went back to the dining room.

An hour later he still hadn't arrived so she went back up toward his room and found him on the stairs.

He was coming down the stairs but was having a difficult time. He had a death grip on the hand rail and seemed to have trouble getting his legs to work right.

She told him she was going to call an ambulance but he told her no, he wasn't in any pain and just wanted to have his breakfast.

When he tried to go back to his apartment after breakfast, he was unable to even get up the first step, so an ambulance was called to take him to the hospital

A couple of hours later, the assistant called the hospital to see how he was doing.

The receptionist there said he was fine, he just had ......

Both of his legs in one leg of his boxer shorts.

Thanks lilyflower for giving us interesting smile especially end bit.

have a lovely day.

The 7 dwarfs have just received the news that from Monday, they can meet in groups of 6...... One of them isn't Happy

My kids favorite joke ' How do you you know if somebody is vegan?' 'Because they f**king tell you that!'

I loved Peter's joke on Googlebox UK : ' oh, he is one of those! If you say you been in Tenerife, he will say he was in Elevenerife!'

It's 4:47am and the birds are giving it loads, especially a very noisy blackbird.

Here's hoping that you all have a better day than yesterday. 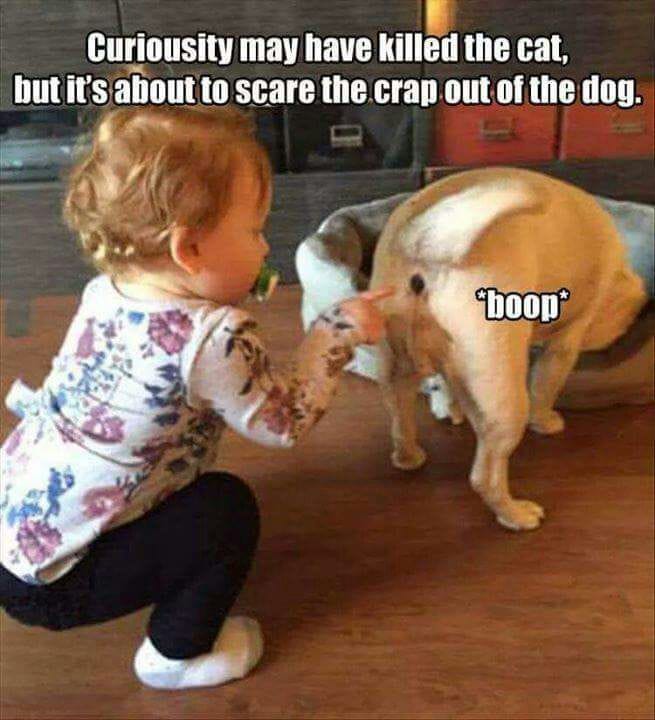 I was awoken by a Police helicopter the other morning at 3.30am. They didn't find me though.

Morning all, or afternoon if you are TheChimp - fancy getting up at that time. My son did something similar to our female dog, no bite, snarl or grump she just got up and pushed him over but they were the best of friends.

A man walks into a bar and says, "Bartender, give me two shots."

The bartender says, "You want them both now or one at a time?"

The guy says," Oh, I want them both now. One's for me and one's for this little guy here," and he pulls a tiny three inch man out of his pocket.

The bartender asks "He can drink?"

So the bartender pours the shots and sure enough, the little guy drinks it all up.

"That's amazing" says the bartender. "What else can he do, can he walk?"

The man flicks a pound coin down to the end of the bar and says, "Hey, Jake. Go get that."

The little guy runs down to the end of the bar and picks up the coin. Then he runs back down and gives it to the man.

The bartender is in total shock. "That's amazing" he says, "what else can he do? Does he talk?"

Hi everyone, I hope you've all had a good day, love the jokes

Hi Dani1 How are you?

Hi Dani1 yes we did had a good day. i hope you’re ok too.I wasn’t home just came back and i login then straight came in chat one thing I have to admit you are a

in chat May God give you all the happiness. in June I am going abroad for 3 weeks my father-in-law is not well I hope everything will be ok I don’t know I will miss everyone i am writing all this just let you know. take care stay safe

Hi lilyflower i'm well, thanks x Was scorching on my walk earlier lol How are you doing?

Sanitation1234 Hi, i'm so sorry to hear about your father in law being poorly. Wishing you a safe journey. Take care and stay safe too

Excellent jokes as always! Today is my parents 46th wedding anniversary! Shame we couldn't celebrate with them but we sent them a wee video.

Just think of the party when you can all get together

lilyflower he has already had two parcels sent to him in the last few days! We had to cancel his christening so that is our next big family party! Where he will be spoilt rotten!