Is It Pointless Reporting Expired Deals?

So I expire deals when they are no longer available, or price has gone up etc.

I always make sure the deal is expired before I report it.

Recently I've noticed certain OPs changing the deals I expired to the increased price, and making it live again.

Does this happen to anyone else?

JenxJen
14 days ago
What do you think of this?

JenxJen You don't get points taken off - they may report your deal as no longer at that price but you keep the points you originally got for sharing. I do a clean-up every so often as I think it keeps the site a little cleaner but they mount up so quickly it's sometimes hard to keep on top of it.

sunny101 thanks for your comment. Yes, I know I dont lose any points, but I do when I report a deal as expired, and the OP makes it live again. I know it's only 5 points, but every little helps lol.

JenxJen Ahh! I think I understand now. We've all had those - you report something that is clearly wrong but you get the 'your report was incorrect' messages. Perhaps it gives the poster longer to share the item because it was a good deal, even at the higher price.

JenxJen Personally, I find it frustrating when I search for a particular item and that page is loaded with out of date deals - it's a case of 'yippee' then 'that was a waste of time'. Deep breath.

We all should expire deals when we find them . There is enough dross on the site without adding "expired " dross to the total.

I welcome having my deals expired as I can't keep up with them , I don't welcome many that are expired when the deal is still current !

If you incorrectly expire a deal you don't lose 5 points really - you just lose the 5 points you got for the incorrect expiry .

We only get out of this site what we put in and it will only go downhill if members continue to use it as a voucher earning site . Someone has to post "real deals" and more and more these are in the minority .

Hey JenxJen if you see anything that’s not right please drop a report and add some info to it and we will investigate it. People shouldn’t be reinstating deals were prices have increased and we can see it in the background if you report it

JenxJen I just seen this topic Emma is right please do send them message make sure take screenshot of that deals. i have lots to say cut it short my deals been reported at night time and posted early in morning now I am 100% sure same person doing all this most of boots deals goes temporary out of stock then comes in stock later I think LD should allow us time limit we can unexpire our deals before other user posted that deal my opinion thanks for your topic take care

Jasmine111 thanks for your comment. I hope you sort your issues. I'm sure it's just a simple misunderstanding. I've shared a few deals that have been removed as it was already shared. Take care

Jasmine111 I can't see why anyone would bother . You can post anything on here and get your 100 points (as hundreds of members do every day ) , it doesn't even have to be a deal as so many obviously aren't .

That's the problem on here - Post anything for points . Sadly that's what 90% of members currently do - and it shows as you scroll through pages and pages of "non deals .

Is It Pointless Reporting Expired Deals?

I think it’s important that users think carefully before reporting deals as expired, especially if the deal was posted recently (i.e. is less than a month old).

If the product is Out of Stock

No problem, report the deal as expired.

If the price of a recent deal has dropped slightly (by say, less than 5%)

Don’t report the deal as expired. This would:

a) deprive LD Members from seeing the latest better deal, and

b) potentially reduce LD’s revenue from affiliate commission that it needs to survive.

If the price of a recent deal has increased (by say, up to 5%)

Don’t report the deal as expired. Simply add a Comment to the Original Poster (OP) telling them the price has increased and giving the OP the opportunity to edit their post. The deal may still be very good even at a slightly higher price. Don’t deprive LD Members from seeing it! 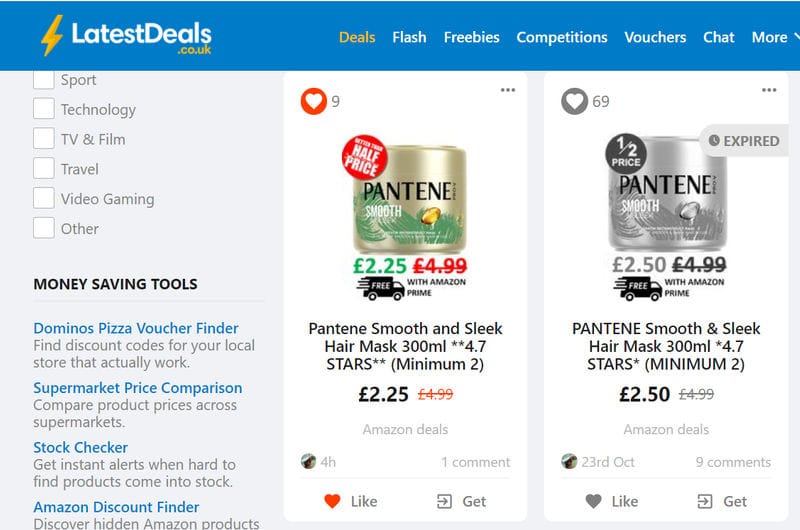 Here’s an example. You’ll see I posted this Pantene Hair Mask at £2.25 today (better than half price). It would still be an excellent and popular deal even if the price increased 11% to £2.50 (half price). And it would still be an excellent deal if the price dropped further. In either case I would hope people would not report the deal as expired but rather send me (the OP) a comment, allowing me to edit my post, and allowing LD members to still benefit from seeing the deal.

Don't forget Amazon deal prices for some products can change several times a day (because Amazon uses dynamic pricing to automatically adjust prices according to demand and actual sales).

In general I think the safest deals to report as expired are those that:

a) Are Out of Stock

b) Have a long wait for delivery, e.g. more than two weeks

d) Require a voucher code that has now expired

Before reporting a deal as expired and making just 0.5p (1/2p), think first:

Personally I think it is worth reporting genuinely expired deals (regardless of the 1/2p) as it helps keep the site tidy and easier to use. It can be frustrating to click on a deal to find it no longer exists, especially for newbies who may not understand how LD works yet.

Johnny wow, your message was thorough. I totally agree with what you are saying. I have encountered a few deals with a price increase of a few pennies, and I've just left the post live, as I personally think it's still a great deal.

Thanks for your advice. I'm sure it will help others aswell as myself.