I had to cook tea tonight and quite fancied some 'Vegetable Creations Smashed Corn' which has been in the freezer for a while. The only issue I had was that due to the extremely poor design of the packaging it was almost impossible to read the instructions on how to cook it. What made it worse is that the only words I could actually read were "Warning", "Important" and "Caution" which is quite worrying when you have no idea what those warnings actually are. It turns out that one of the warnings was to say dont eat the frozen product without cooking it - probably would not do that anyway.

You would think that someone at Tesco would have spotted that issue before this package design was signed off and printed.

Surely in this day and age companies are being more careful and thoughtful for those with visual disabilities. (Im not blind - just need reading glasses!)

Anyone else found anything with poorly designed packaging? (the other thing that really annoys me is when its impossible to open a packet) 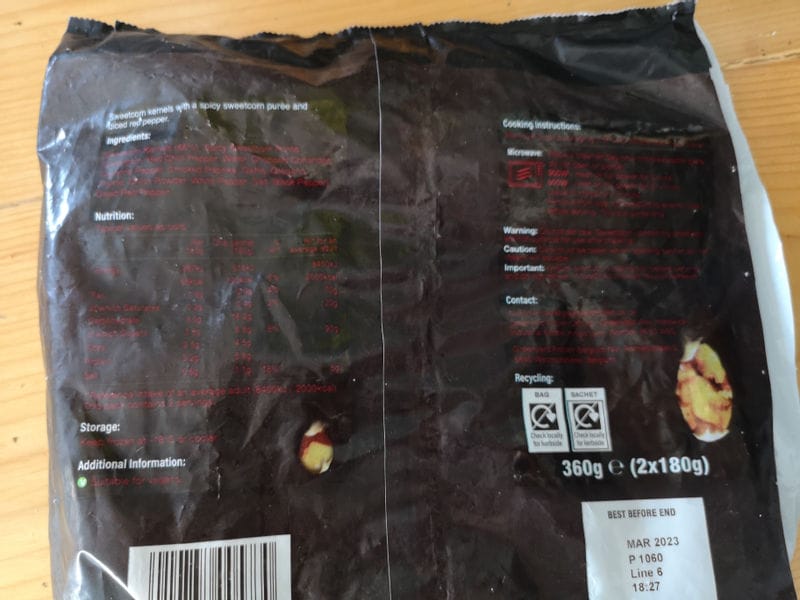 didbygraham
3 months ago
What do you think of this?

My big moan is about those sticky strips that are meant to reseal the packet. They never work.

I can't seem to open anything I don't know if it's me or the packaging. By the time I've opened my disposable razor my leg hair has grown even more!!

I wear glasses for reading but most often I can do without until it comes to reading from jars and packaging.

I buy vacuum sealed fresh meat from Waitrose and can never just pull it open. I have to get scissors to cut it out. Same with fresh fish portions.