What do people think about this?

Mp's have a 3k pay rise, 12 billion for excel spreadsheet, 16 billion on defence and 21 million on for some ppe middle man and its the public sector workers who have to suffer!

Getsome
6 days ago
What do you think of this?

Disgusting that people who still have jobs May not get a rise next year ?

Think that millions of folk who no longer have a job would love to have a job and "not get a rise " next year !

Yeah it is and they could have used the money from the Serco track and test failure to pay them. Also a lot of people wouldn't be redundant if the incompetent government had of actually announced furlough earlier.

Getsome Any other bonkers headlines in the Socialist Worker this morning we should have read ?

Golfforall Ha ha bonkers headlines. Maybe you should go back to crying over your pressure washer

It must be very disheartening for NHS workers who have done an amazing job since March to be told their salary is being frozen - again! They need a decent wage, not empty platitudes and doorstep claps.

The NHS is not included in the "rumoured" Public sector pay freeze .

Public sector wages are far too high in my opinion. Private sector wages and pensions have dropped hugely over the last 10 years or so, so it seems unfair that people are forcibly taxed to provide higher wages and pensions for others who do the same work. It used to be said that it is more important for the private sector to attract the best people as they provide the means to our commercial success so it used to be the public sector got less than the private sector. However that hasn't be true for probably at least 20 years. Here is a statistic I think from 2011 and it has got considerably worse today much more in favour of public sector workers. In my opinion its not about what people deserve its about what the country can afford. You don't run a commercial company or what you would like to pay staff but it seems the same logic isn't carried forward to the public sector where governments just borrow the money to pay public sector wages and that debt will be paid by our children and grandchildren.

Sadly this country is digging itself into a huge hole and that hole is massive debts. The longer we leave it before facing this problem the greater the problem will be. 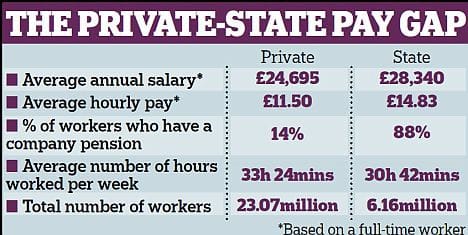 That's the thinking behind the leaks . Its been for many years a choice between the security (and pensions ) of the public sector and the opportunity of the private sector . There has always been a swing between them as the economic situation has ebbed and flowed .

Its not even a political matter (back to your Socialist Worker cartoons Getsome ) its simply supply and demand for workers and the public sector don't need to compete at this time . There's even been a boom in those applying to join the Army and I doubt that's been fuelled by patriotism !

BonzoBanana sadly this country is digging itself into a hole and that hole is massive debt but no mention of pay rise or serco or Ppe?

Golfforall I can't disagree with your comments you are basically stating I think the public sector makes itself immune from the current economic issues. When you realise the private sector statistics include very high wages for managers etc which wouldn't be replicated in the public sector to the same degree you realise how much worse the bottom end workers in the private sector are paid and how few have pensions.

I feel we’re all going to have to contribute to paying for this pandemic. Unfortunately lots have lost their jobs and goodness knows how this will affect their family life and homes. Those in the public sector have seen good pay rises recently and are grateful for their jobs.

My husband works in the public sector, he is a teacher. We live in Scotland so the pay freezes etc work slightly differently here, but my husband would be fine of there was a pay freeze, he is just happy he still has a job and we can still afford to pay our bills.

Yes the public sector has kept us going and we are all grateful for that, but we have to pay back the huge amount of money that it has cost us during the pandemic. I don't think the MPs should have gotten a raise, I think that money should have gone towards paying off the debt.

MrsCraig If public sector workers have a pay freeze then so should have the mp’s. If the public sector don’t get pay rise then neither should the mp’s and that’s what annoys me the most. Also I believe 12 billion for a track and trace which we don’t need and never needed would go to help paying debt but the debt we are in has been caused from too much been funnelled out the government into private hands

Getsome Not to let politicians off for their corruption and incompetence but realistically we ourselves have caused our own problems. People are happy to export most of their wages on foreign goods and holidays and so we have ended up with a large trade deficit which has meant we have exported sterling to other countries without them buying our goods and services to the same degree so instead that money has been used to buy property and companies in our country. The issue is the public don't seem to care about the economy themselves and just do as they please but still complain when the NHS is starved of money or the roads have potholes etc or maybe policing is minimal in their area. If you give all your money away then its no surprise when you can't pay the bills and are forced to borrow.

Before we joined the 'EU' and even slightly after there were campaigns to 'Buy British' maybe those will return except now of course we have decimated most of those industries so it will be more of a struggle to find British goods.

Obviously it will hit a point where our creditors panic and the £ devalues and our debts become even worse as they become even harder to pay. There will be a financial crunch in this country where much more extreme poverty is widespread but hopefully we can change the mindset of people and they will realise their stupidity and the importance of running a sound economy without huge levels of debt and we can build on that. I think the current public sector debt is about £2.1 trillion and that is not the full debt there are many more debts to add to that. If its was something like £3 trillion in total that is about £100,000 of debt for every income tax payer in this country. It's a mortgage of debt for every working person. That debt just keeps increasing too currently, the country is basically making the minimal interest payments only.