What's Your Opinion on TV License? 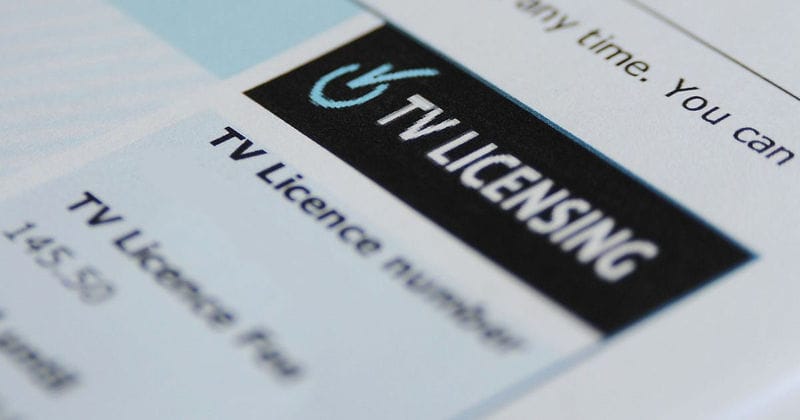 2. They don't like it but keep paying so they won't receive threats.

3. Actually think it's a good idea it exists.

The 'legal sharks' behind TV Licensing know people are starting to get tired of it so they're trying to include more ways (phones/tablets/etc) how one can watch TV to claim it's part of the license too. I honestly don't remember any other country that has a con license like this (at least in regards to being TVL) though if it did exist, many would protest it.

PhilipMarc
over a year ago
What do you think of this?

I stopped it last year for several months. It was due and I rang them up and said I didn't want it. Then my parents were going on and on at me 'have you watched this and that', even though I've told them and told them I don't watch tv much at all. Eventually I said look I don't have a license anymore so I don't put the telly on. Oh god, then it was they are coming to your house to inspect, they are going to fine you £1000. You will get a letter in the post saying you owe them £1000, etc. I got so fed up, I ended up getting a new license. My parents going on at me about being fined and inspectors. So I have one again now and I'm not happy. It's a lot of money for a load of crap shows that I don't watch. I thought it was only if you watched BBC, but no, they've put so many new reasons in why you have to have a license. It's another tax in my opinion.

I don't own a TV and don't need a license. I had a lady from the TV licensing come and inspect my living room, saw there was no television set and left. I still have to fill in a declaration every year to swear I don't have a TV and don't watch TV online. I hate that they assume you're a criminal if you don't pay. They bombard you with threats for the first year.

Good idea. I currently live with my parents but when I get a house of my own I don't intend on having a TV either. Hardly anything good on TV nowadays anyway.

Some go to extremes to hide the tv P

I still wouldn't have let her in. They don't have any rights to enter your home - unless you invite them in.

we use netlix and now tv and rarely normal tv so I think about getting rid but as you say the worry and anxiety that would come from not having a license means i keep paying.

Never paid it - would feel guilty if i did paying people like Jimmy Saville and all the overpaid so called celebs for channels I rarely watch if ever!

There are also legal ways to keep them off your property and if you live in a flat they cannot detect your tv that is an old wives tale!

You have a tv license. For tv, mobile phone, and a laptop or tablet . Radio. I was told by a lady on the phone. So if you do not have a tv . You still need license for the others which I do I pay every 3 month.

PhilipMarc
Original Poster
over a year ago

Well, when a company decides to add a TV screen to their microwaves that'll be another thing to add to that list.

There was one person I knew who paid for the black and white tv licence for a number of years to avoid a visit from the tv licence people - it used to be only £30+ per annum, and as long as it was paid, they left him alone. I believe they’ve scrapped that licence now so that’s not a viable option for him anymore.

Mainly watch Netflix or on demand tv which is not iplayer so don’t need one. It’s basically a BBC tax...if you look at how much bbc management gets paid it’s disgraceful.

I think they finance the whole BBC from it, but it is something not exist in other countries. I am not against it, but the fee is too high. Maybe they should set it to £20 a year and more people would pay it honestly.

What I think, if u pay for Sky, Virgin ...etc it does not make sense why it is not included in the fee, when in their package, they will show these "free" channels and they actually not fee.

So u end up paying for TV license, plus normal provider Sky, Virgin or others and of course Netflix....or other subscription to really get something what u want to watch, because on the normal channels u only can see boring things. The amount of money spent is crazy....

PhilipMarc
Original Poster
over a year ago

They always find some loophole to make users pay for a license. If Hulu was streamable in UK (it is via a VPN), they'd add Hulu to that list too.

Rockman Yeah, I understand it, but than why we need to pay for the TV providers? Most of the other programs have advertising, so they sponsored to be made. Except BBC. I only watch the news there and I do not think so that is equal with the amount they charge.

I am completely against this TAX. If you have no option (and you don't really have an option) it can't be called anything other than a TAX. Why do the people of this country have to pay for the BBC to send broadcasts to the WHOLE WORLD. Why doesn't the rest of the world pay for receiving it??? It is despicable to penalise us and not charge them. Given the history of the BBC and it's presenters the whole thing should be scrapped immediately. All the programs that we have already paid for through the licence fee are now available on other channels, so you can pay for them all over again.....

Prices are different how do you want to buy

I pay it, I dislike paying it as I don't tend to watch regular TV. I now pay virgin of which I'm reasonably ok with the cost for what I'm getting but having to pay a TV licence on top is crazy

tv licence its a bit of a waste of money especially with all the entertainment you can get now without needing one, im not 100% but i believe its mostly only the bbc i player and main tv you need one for so why spend all the money for it when you can watch netflix amazon catch up ect 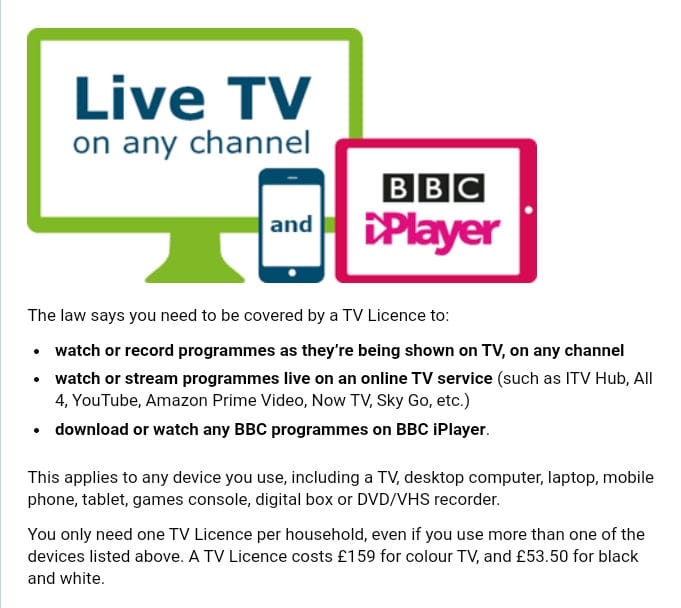 "Streaming live" meaning times when they air soccer matches and the sort on YouTube, Amazon, etc. Video on Demand isn't on there, but they'll probably find a way to con people to pay their scam license.

I pay but as low on funds I feel its a bit of an imposition as it's quite hefty price wise .Nor am I happy with its bed fellows and its political bias.

I pay but not thrilled about it. I guess it just saves the hassle.

I think it would be a great idea for companies like sky and virgin to do packages excluding bbc channels. I personally can’t name a single bbc program I watch.

I'm not thrilled by it but pay it regardless.

Well, if you watch live TV or/and BBC iPlayer then you have to. I personally see no value in live TV anymore, but some people like having 100-200+ channels.

I watch ITV, Ch.4 and Ch. 5 on catchup services I really don't miss not having a TV license and my mother lives nearby who has a free license so I watch anything I want to see on BBC there but there really isn't anything I'm too bothered about. I really think the BBC should be scrambled and those who want it should pay for a descrambling box and card. It is really unfair that you should be blocked watching live ITV, Channel 4 and Channel 5 stations which are funded by advertising.

I don't hate the BBC though I just don't require its services for the price they have stated. I resent all government's who have kept the TV license though. I also think the BBC is inefficient and over-payed and often not very good at the programs they make. I also think they are too focused on the arts and not really a commercial channel. I do realise without TV license funding they would probably quickly die and be gone and I personally wouldn't have a problem with that.

People just don't need the BBC like they used to, there are many other entertainment services that provide better content.

Saying that I'm not sure I would want funding to just end I would gradually reduce the license fee over the years perhaps over a 10 year period to nothing. They can either adapt to a commercial company providing a fair opt in subscription service and sort out their inefficiencies and high wages. The BBC is a strange organisation they will pay out huge sums for some content which is viewed by relatively few people in the name of art and provide low cost entertainment for the masses. I'm sure the BBC are producing some good shows but I'm mainly into scifi and not into the modern Dr Who at all. I did enjoy the Atlantis series although season 2 was very poorly made with dark visuals and poor audio possibly due to a cut in budget. I should add I don't have Amazon prime, netflix, now tv or any other streaming service. I watch youtube mainly for content and files on my nas drive that has bluray and dvd rips.

I haven’t had a tv license for several years. Never once have I had any threats, letters or visits. And for 2 years I had a deal with virgin that included a TV deal… I had the box unplugged and packed away, never used, but it was cheaper. I don’t watch anything live, even on YouTube.

There is a fourth option P

Using it as toilet paper

Thats all it is good for

2 living with aged parent who watches mostly the BBC ....if / when alone not going to pay it or watch a live TV.