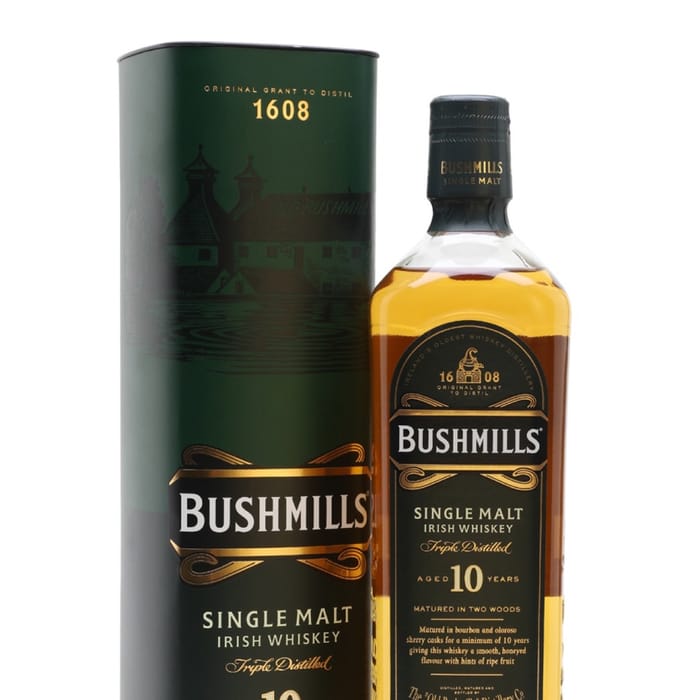 Matured in bourbon and oloroso sherry casks for notes of honey, vanilla and ripe fruit

This combination of woods makes this 10 year old smooth and approachable. Its honey, vanilla and chocolate notes are balanced by toasted wood, ripe fruit and a crisp, clean finish.

Found on County Antrim's rugged coastline, the village of Bushmills is home to Ireland's oldest whiskey distillery. Official records stretch back to 1608, when the area was granted its license to distil.

Over 400 years later whiskey is still being made in Bushmills, thanks to the experience and craft we've passed from generation to generation.

We couldn't make our whiskey anywhere but here. Our water, drawn from the river Bush, flow over beds of basalt rock, the same rock that lends its unique character to another famous local attraction - The Giant's Causeway.

The casks selected for aging our whiskeys are also essential, so we keep close ties with cask-makers in Spain, Portugal and America. Once shipped to the Bushmills distillery the casks are filled and left to mature, working their magic to give our whiskey its enjoyably rich, mellow yet distinct flavour.

What do you think of this Sainsbury's deal?

LOve this and it is a great deal I have got just the person who will be very happy with this whiskey. Thank you for posting