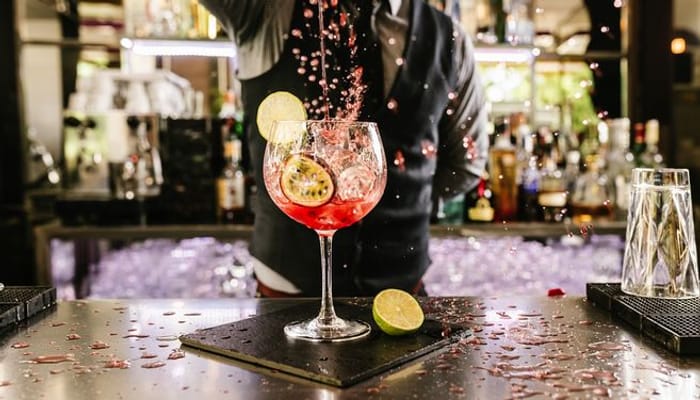 With your OMG Experience you'll enjoy taste-bud tantalising cocktails in the beating heart of London and tickets to your choice of a top West End theatre show.

For your cocktails you'll be sipping them at world-renowned Planet Hollywood London in the heart of the theatre district.

Experience the glamour of Hollywood and the vibrant atmosphere at their stylish Haymarket venue, steps from the bright lights of Piccadilly Circus and the beating heart of London's West End & maybe enjoy a bite to eat.

Then when it's time for your theatre show you'll be able to get comfy in your seats and take in the magic of a show of your choice.

& Juliet - What if Juliet’s famous ending was really just her beginning? What if she decided to choose her own fate? Join Juliet on this sensational journey of self-discovery and second chances, told through some of the most glittering pop anthems of the last three decades from legendary songwriter Max Martin, including …Baby One More Time, Since U Been Gone, Roar, Everybody (Backstreet's Back), Love Me Like You Do and Can’t Feel My Face, all brilliantly arranged by the Tony and Grammy Award-winning orchestrator Bill Sherman.

9-5 The Musical - 9 TO 5 THE MUSICAL tells the story of Doralee, Violet and Judy - three workmates pushed to the edge by a sexist supervisor. The three ladies tie up their bigoted boss to take revenge and reform the office - but when the CEO pays a surprise visit, everything’s in danger of unravelling...

and four Olivier Awards, including Best Musical for both, follows a pair of Mormon boys sent on a mission to a place that’s about as far away a from Salt Lake City as you can get.Arsenal Museum

Come From Away - This joyous new musical shares the incredible real-life story of the 7,000 air passengers from all over the world that became grounded in Canada during the wake of 9/11, and the small Newfoundland community that invited these ‘come from aways’ into their lives.

Jamie New is sixteen and lives on a council estate in Sheffield. Jamie doesn't quite fit in.

Jamie is terrified about the future. Jamie is going to be a sensation.

Supported by his brilliant loving mum and surrounded by his friends, Jamie overcomes prejudice, beats the bullies and steps out of the darkness, into the spotlight.

Life of Pi - After a cargo ship sinks in the middle of the vast Pacific Ocean, there are five survivors stranded on a lifeboat - a hyena, a zebra, an orangutan, a Royal Bengal tiger, and a sixteen year-old boy named Pi. Time is against them, nature is harsh, who will survive?

Based on one of the most extraordinary and best-loved works of fiction – winner of the Man Booker Prize, selling over fifteen million copies worldwide – and featuring breath-taking puppetry and state-of-the-art visuals, Life of Pi is a universally acclaimed, smash hit adaptation of an epic journey of endurance and hope.

The Lion King - Set against the majesty of the Serengeti Plains and to the evocative rhythms of Africa, Disney's multi award-winning musical will redefine your expectations of theatre.

At its heart is the powerful and moving story of Simba - the epic adventure of his journey from wide-eyed cub to his destined role as King of the Pridelands.

Mamma Mia - Over 60 million people all around the world have fallen in love with the charismatic characters, beloved story and toe-tapping magical music that just makes you want to sing along and makes Mamma Mia! the ultimate feel-good show - and now you can too!

The magical story of the world’s favourite Nanny is triumphantly and spectacularly brought to the stage with dazzling choreography, incredible effects and unforgettable songs. Starring Zizi Strallen, returning to play the title role following great acclaim on the recent sell-out international tour, and Charlie Stemp as Bert, who recently gave an award-winning performance as Arthur Kipps in Cameron Mackintosh’s production of Half A Sixpence.

Matilda The Musical - Winner of over 85 international awards, including 16 for Best Musical, Matilda has and continues to delight audiences around the world. Inspired by the book by much loved author Roald Dahl, Matilda The Musical is brought to life by the Royal Shakespeare Company. This multi-award winning musical is fun for all and one you won't want to miss!

The Mousetrap - The Mousetrap is celebrating the 64th year of a record breaking run during which over 26,000 performances have been given. It is quite simply a great piece of theatrical history because of what it is, a whodunit written by the greatest crime writer of all time.

The Phantom of The Opera - This multi-award winning musical continues to captivate audiences at Her Majesty's Theatre in London's West End, after more than 12,000 performances.

The Prince of Egypt - Experience the epic emotion and soaring music of THE PRINCE OF EGYPT, the extraordinary new musical from three-time Academy Award-winner Stephen Schwartz (composer of the global phenomenon Wicked). Journey though the wonders of Ancient Egypt as two young men, raised together as brothers in a kingdom of privilege, find themselves suddenly divided by a secret past.

Les Miserables - You dreamed a dream… and it might come true. If you want to see one of the most emotion-packed, world-renowned musicals of all time, then here is the chance.

The Play That Goes Wrong - The Cornley Polytechnic Drama Society are putting on a 1920s murder mystery, but as the title suggests, everything that can go wrong... does! The accident-prone thespians battle against all odds to make it through to their final curtain call, with hilarious consequences! Given five stars by The Daily Mail, called a "gut-busting hit" by The New York Times, and with celebrity endorsements from the likes of Ant and Dec as the "funniest show we've seen! If you can get a ticket go", what are you waiting for?

The Woman in Black - The Woman in Black is a gripping theatrical exploration of terror, steeped in atmosphere, illusion and controlled horror that's been thrilling audiences for over 28 years in London's West End and has left over 7 million people wide-eyed and tight lipped.

Tina: The Musical - From humble beginnings in Nutbush, Tennessee, to her transformation into the global Queen of Rock ‘n’ Roll, Tina Turner didn’t just break the rules, she rewrote them. This new stage musical, presented in association with Tina Turner herself, reveals the untold story of a woman who dared to defy the bounds of her age, gender and race.

Waitress - Waitress tells the story of Jenna, a waitress and expert pie maker who dreams of a way out of her small town and loveless marriage. A baking contest and the town’s new doctor may offer her a chance at a fresh start, while her fellow waitresses offer their own recipes for happiness. But Jenna must summon the strength and courage to rebuild her own life.

Witness for The Prosecution - YOU HAVE BEEN SUMMONED FOR JURY SERVICE...

Step inside the magnificent surroundings of London County Hall and experience the intensity and drama of Agatha Christie’s gripping story of justice, passion and betrayal in a unique courtroom setting.

Leonard Vole is accused of murdering a widow to inherit her wealth. The stakes are high - will Leonard survive the shocking witness testimony, will he be able to convince the jury, and you of his innocence and escape the hangman’s noose?