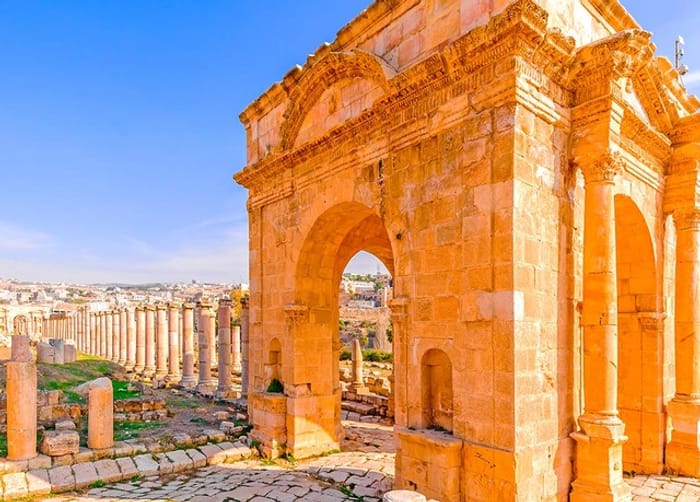 An eye-opening tour of incredible Jordan, with a 4x4 desert excursion in Wadi Rum and trips to Petra, Crusader Castles and the Dead Sea – includes all travel and half board

Jordan, a land of deep red deserts, stunning archaeological sites and a significant history stretching back over millennia, is a must-see destination. During this seven-night tour, you'll travel from bustling cities to the tranquillity of the Dead Sea, staying at three hand-picked hotels along the way.

It all starts in Amman, a modern and cosmopolitan city with a chic, contemporary cafe and culinary scene, sitting alongside the chaotic souks. Whilst here, you’ll head out on a day-long tour of Amman, which takes in the urban centre and the Roman theatre, the Decapolis city of Jerash, Ajloun Castle and more. You’ll also head to the salt-rich waters of the Dead Sea, as you descend to the lowest place on earth, and visit the Desert Castles, some of which date back to the seventh century.

Next, you'll head to Petra, visiting the Mosaic city of Madaba – where the oldest map of the Holy Land exists – Mount Nebo and Shobak Castle en-route. A full-day tour of Petra will see you visit the most important and representative monuments that have been sculpted into the rock, including the Treasury (which was used as a setting in Indiana Jones and the Last Crusade), the Coloured Tombs and the Royal Tombs. You’ll also visit Little Petra – the Nabataean capital in miniature which was built as a retreat for the ancient nobility.

You'll then spend time in the lunar-like terrain of Wadi Rum, which has also spent some time on the silver screen – Lawrence of Arabia was shot here. Explore this unusual landscape with a 4x4 excursion that will take you over the rich red sands, before spending the evening over dinner under the stars in a desert camp. Then, you’ll head back to Amman to spend your final night, before catching your flight home the next day.

For more information about your itinerary, please see our supplier's website. The order of the itinerary may change depending on the departure day.

Please note that should you arrive late on your first day, dinner will not be included. Breakfast on the last day is included if your return flight is after 11am.

This holiday allows you to spread the cost of your break by paying only the deposit upfront. The remaining balance is due at a later date and is to be paid directly to the holiday supplier (the exact date will be stated on your booking confirmation).

Please also note that at the time of booking, your name must be filled out exactly as per your passport (including any middle names). This is in order to accurately book flights and for any required visa invitation letters.

We have 793 Secret Escapes deals on Latest Deals.

What do you think of this Secret Escapes deal?