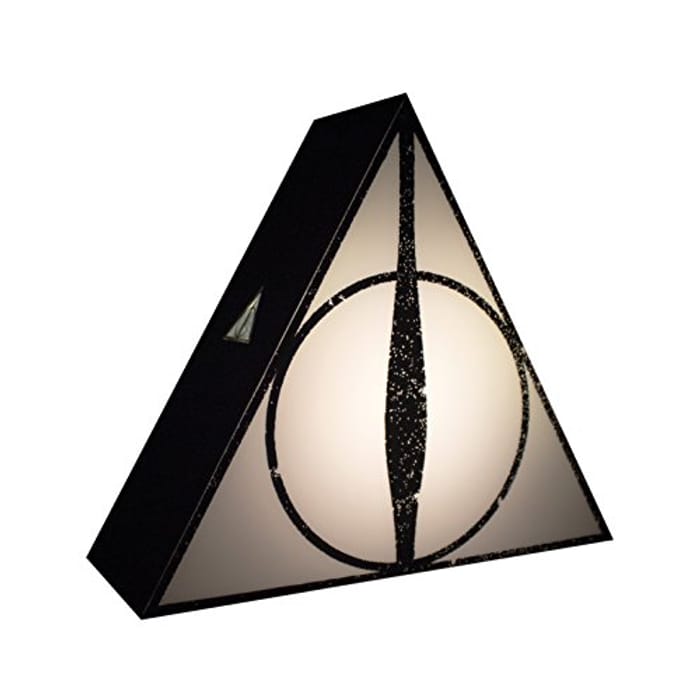 Project the Elder Wand, the Resurrection Stone, and the Cloak of Invisibility onto your wall with this Deathly Hallows Light. This light features the Deathly Hallows logo on a triangular light, with black casing around its edge. And, once switched on, the logo is projected onto nearby walls from both side panels. The Deathly Hallows Light is 20cm (8%u201D) tall, is USB or battery powered (USB cable included, 3x AAA batteries not included) and makes a wonderful gift for lovers of the Harry Potter franchise. First published in 1997, J.K. Rowling's bestselling series of novels following the magical adventures of Harry Potter, Ron Weasley and Hermione Granger has since become a cultural phenomenon. A huge success in novel form, the world of witchcraft and wizardry was then given big screen treatment in 2001, launching one of the most successful blockbuster film franchises in cinema history. Harry Potter is instantly recognisable to millions of people across the world, and is hugely popular among fans of all ages. The Deathly Hallows Light is a Harry Potter product.

Will send this over to my friend who really loves anything Harry potter!

My granddaughter will love this. Thank u for sharing

Really cool collectable to any Harry Potter's fan! Thanks for share this deal!