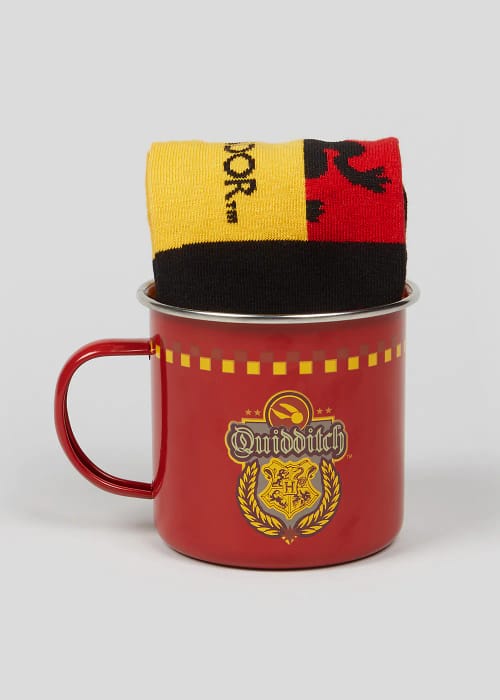 Choose your team before the next Inter-House Quidditch Cup and show your support with this cute Gryffindor Quidditch Tin Mug and Socks Set. This nice little pack containing a standard size drinking mug and a pair of UK men's size 7 - 11 socks is the perfect gift for lovers of Quidditch and the house Gryffindor. The socks and mug are in the Gryffindor colours of scarlet and gold. The tin mug features the Hogwarts crest and the word 'Quidditch' on its side and the socks feature the Gryffindor lion and house's name. First published in 1997 J.K. Rowling's bestselling series of novels following the magical adventures of Harry Potter Ron Weasley and Hermione Granger has since become a cultural phenomenon. A huge success in novel form the world of witchcraft and wizardry was then given big screen treatment in 2001 launching one of the most successful blockbuster film franchises in cinema history. Harry Potter is instantly recognisable to millions of people across the world and is hugely popular among fans of all ages. The Gryffindor Quidditch Tin Mug and Socks Set is an officially licensed Harry Potter product. Approx Dim: 16cm x 12cm x 9cm.

We have 2,129 Matalan deals and 136 Matalan discount codes on Latest Deals.

What do you think of this Matalan deal?