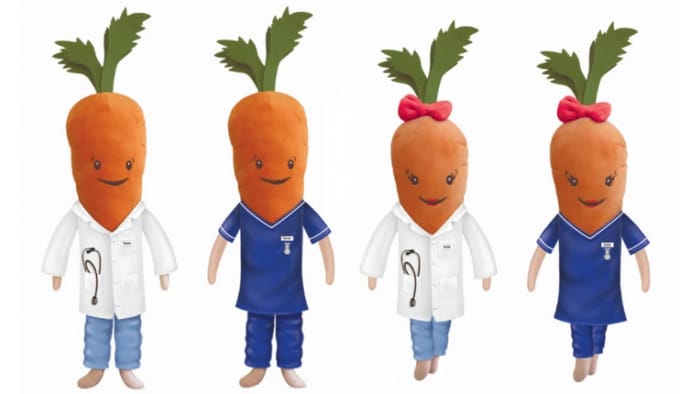 Available from ebay
£27
65 people like this deal
Get Deal

Kevin the Carrot has been a sensation for Aldi over the last few Christmas seasons, but now he's making a special appearance for the very best reason - to celebrate our NHS heroes and raise money for charity.

Aldi* has released a limited edition Kevin the Carrot and Katie the carrot, which are being auctioned off on eBay* in aid of NHS Charities Together, and its long-term charity partner Teenage Cancer Trust.

Kevin and Katie don NHS uniforms in a limited run of just 400 toys, which are being sold via eBay* with 100 percent of the proceeds donated to the two charities.

The toys are available to bid on via auction starting at £1.11, to reflect the non-emergency number the public are encouraged to call if they experience covid-19 symptoms.

The auctions will take place over a four-week period with the first lots launching at 8pm on Friday 24th April.

The information above may be temporarily incorrect because of coronavirus. Please check with ebay.

Will have to have a look at this . I have all the Kevin sets except these. Depends on price. Thank you for posting this.

Wow, what a lovely idea to support our NHS and give to our children a special superhero toy, will definitely be placing a bid in support

Love Kevin the Carrot! Anyone else a collector?

What a lovely idea! Thank you for sharing this

That's sweet but also a tad creepy, especially since they have skin coloured arms... They could make them have more carroty colour...

Everyone I know collects these lol I don't see the appeal myself people go crackers for them don't they but I think it's fab they are supporting the NHS !!

Love Kevin the Carrot! Expect these to be bid on loads and go out of my price range though! Good cause though.

I love these ones! I wonder how much they'll go for. We'll have to wait and see. Thank you for sharing

Thank you very much for sharing this deal really like this