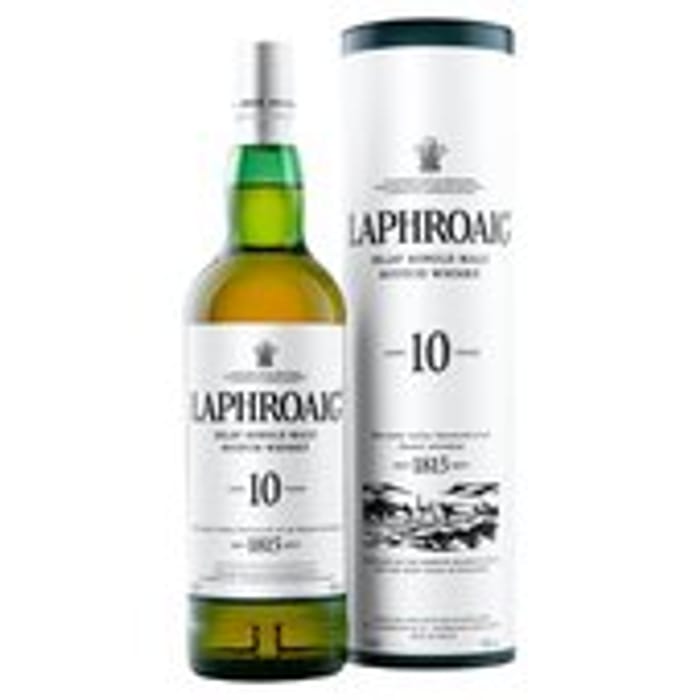 Original Cask Strength Laphroaig is bottled at natural distillery strength with all the depth of genuine taste and texture normally associated with sampling whisky at source.

We mature Laphroaig in seasoned oak barrels, charred before filling to impart a slight sweet vanilla nuttiness. Original Cask Strength Laphroaig is barrier-filtered only just, to remove the small char particles present. This means you will enjoy Laphroaig exactly as we made it.

In extremes of temperature and when you add water it may appear a little cloudy - this is the natural condition of a malt of such a peaty pungence and uncompromising purity. Adding a little water releases a rich aroma of peat smoke with some sweetness and strong hints of the sea.

Emphatic, full bodied and utterly unforgettable - we like to think it's the purists choice.

The island of Islay is situated on the rugged west coast of Scotland, a beautiful yet uncompromising place at the mercy of the sea, wind and rain. In the corner of the island is a distillery in a special place, a beautiful hollow by the broad bay or, in gaelic Laphroaig. The Laphroaig distillery was founded here in 1815. 1815 Laphroaig distillery founded by Donald and Alexander Johnston on the site of a farm, beside the Atlantic, with a steady source of water from nearby Kilbride Hills. Laphroaig means `beautiful hollow by the broad bay. 1920s First major expansion by family member Ian Hunter. Laphroaig bottled as a single malt for the first time. Laphroaig was sold legally during prohibition in the USA on medicinal grounds. 1954 Bessie Williamson became Manager and Owner at the request of Ian Hunter. She started as a short-term secretary and ended up staying for 40 years. Entrusted with the secrets of Laphroaig, she was one of the first women owner 1972 Bessie retired after making a number of improvements, including expanding the still house.

By Appointment to HRH the Prince of Wales, Distiller and Supplier of Single Malt Scotch Whisky, D. Johnston & Co., (Laphroaig) Isle of Islay

To find out more about Laphroaig visit: www.laphroaig.com

We have 2,945 Morrisons deals and 123 Morrisons discount codes on Latest Deals.

Brilliant price for this bottle of malt. Thank you for sharing this deal