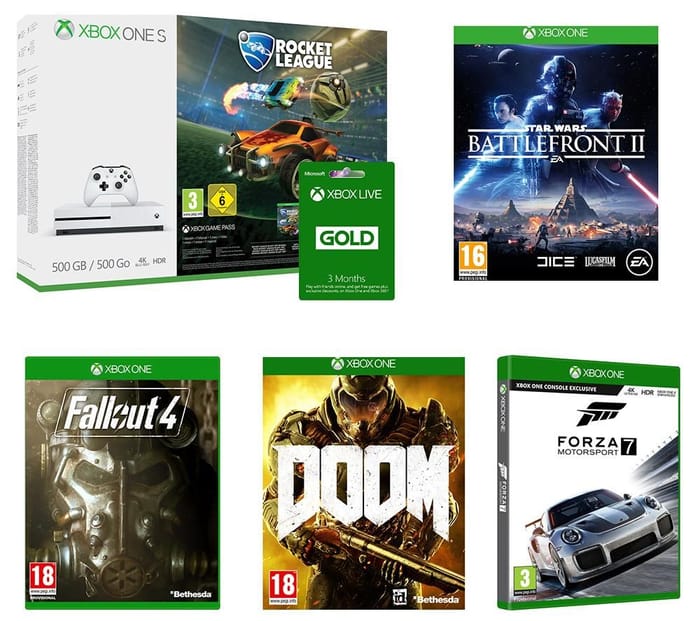 The Xbox One S is an enhanced Xbox console; 40% smaller and with High Dynamic Range technology to make games look better than ever. Dive into the world's greatest games on a more streamlined console with a modern new design. The 500 GB hard drive offers plenty of room to store more of your Xbox One games and Xbox 360 classics, 4K movies and apps.

Experience richer, more vibrant colours and High Dynamic Range Technology which delivers better contrast ratios between light and dark colours to bring out the true visual depth of your games. The new Xbox Wireless Controller has a new streamlined design with a textured grip that feels better in the hand.

Climb into your power armour and head back into the Wasteland with Fallout 4. The latest instalment of the acclaimed Fallout series, journey further into the post-apocalyptic world by exploring into the ruins of Boston - now known as the Commonwealth.

With a huge open world environment and hundreds of locations, weapons and missions, Fallout 4 is certain to please every gamer.

Rocket League combines the fun end-to-end action of football, with high-powered, jet-fuelled cars. Choose from a selection of high-flying, acrobatic vehicles equipped with rocket boosters, and attempt to outscore and outmanoeuvre your opponents.

Whether you choose to fight against the forces of evil or embrace the dark side, you can join up to 40 other players online in massive multiplayer fights. Explore iconic locations from all three eras of the franchise as you customise and upgrade your character.  Ride tauntauns, race speeders and take on your enemies in space battles piloting X-wings and Imperial ships.

Featuring over 700 ForzaVista cars and 30 world-famous destinations, you'll experience truly immersive 4K realism. With the Forza Racing Championship esport league, enhanced spectating modes and Mixer integration, everybody can get involved and compete. Racing conditions can change every lap and every race, creating an immersive experience which tests your skills to the limit.

Battle your way to hell and back with Doom. Obliterate demon hordes and traverse the depths of hellish surroundings to take back the Union Aerospace Corporation's research facility on Mars. With a futuristic arsenal and advanced melee system, you can take demons down in a huge variety of violent and creative ways.

Dominate your friends and opponents in the signature arena style multiplayer game, with unique power-ups that even let you play as a demon.

Enjoy unlimited access to premium Xbox gaming, competing with the best players in the world.

Not ready to play the best yet? Then Xbox LIVE Gold Membership features a TrueSkill matchmaking system that allows you to review and then match your ability to other suitable opponents.

There's even the option to stream Xbox content through a smartphone or tablet using Smartglass and you can use your mobile device as a remote.

With two of these three month subscriptions included in your bundle, you'll be able to enjoy the benefits of Xbox LIVE for half a year.