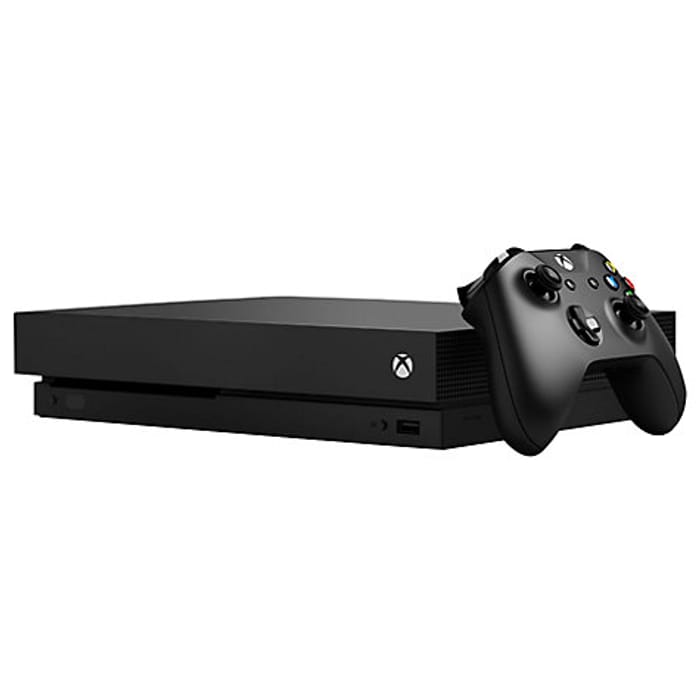 Nice Discount Microsoft Xbox One X 1TB Console The Xbox One X is the latest member of the Xbox family and is sleeker than ever, yet harnesses 40% more power than any other console, making it the most powerful gaming console in the world!

If you have a 4K Ultra HD television to connect your Xbox One X to then you can experience immersive true 4K gaming in its full glory, rather than settling for upscaled graphics. However, even if you game through a 1080p screen you can be sure that you games will load quickly, run smoothly and look fantastic. Dynamic Range technology ensures fantastic colours and depth in whatever your playing or watching, whilst Dolby Atmos and DTS:X ensure the audio is just as immersive as the visuals.

Games play better on Xbox One X than ever before thanks to its 8-core custom AMD CPU clocked at 2.3GHz and 12GB GDDR5 of graphics memory. The 326GB/sec memory bandwidth ensures every frame is quick and sharp, whilst the 6 Teraflop GPU enables 4K environments and characters to run smoothly and appear amazingly lifelike.

The sleek and compact console features advanced cooling technology, so your console stays cool and quiet as you experience the power of Xbox One X.

Xbox One X is compatible with all Xbox One games and accessories ( Please note: To use your existing Xbox One Kinect Sensor with your new Xbox X, you'll need a Kinect Adapter), so you can continue to enjoy old favourites as well as looking forward to even more jaw dropping new releases. Many Xbox 360 (over 300 titles) will also work with the Xbox One X so there is no need to forgo the classics of your youth!

Xbox OneXboxConsoleMicrosoft
What do you think of this Districtelectricals deal?