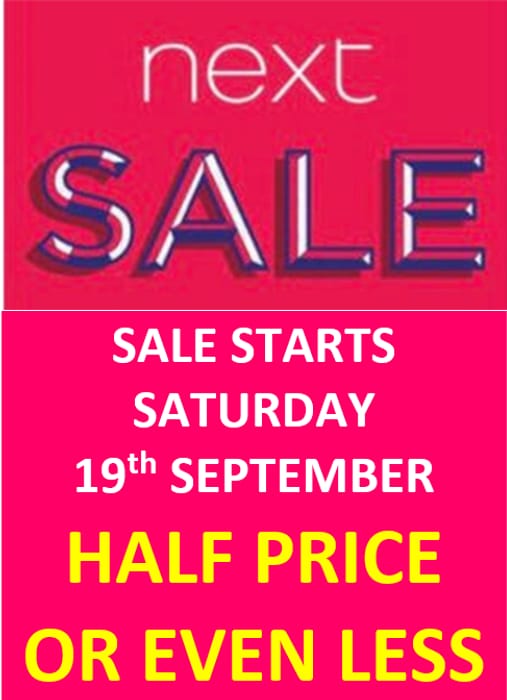 NEXT SALE - Half Price or Less

Available from Next
222 people like this deal
Get Deal

***Saturday Update - NOW CONFIRMED. It's started!*** Most NEXT Stores are opening early today. See below.

HALF PRICE OR EVEN LESS

If you want to get to your local Next store early for the Next Sale I recommend checking opening times on the Next Website, under Store Locator.

The Next Store at the London Westfield Shopping Centre, for example, will open at 7am on Saturday 19th September.

You can expect fantastic discounts of at least 50% off in-store and online (rather than the usual ‘up to 50%’) so you can get brilliant clothing deals, but don’t forget about shoes.

In Homewares some of the best deals are usually half price bedding and curtains.

Mark your diary! But note that Next won’t confirm the exact date of the forthcoming sales until just before it happens. (NOW CONFIRMED)

For cheap clothes look at the Next Clearance.

We have 354 Next deals and 27 Next discount codes on Latest Deals.

What do you think of this Next deal?

Heads Up! The Next Sale started this morning.

Have a great weekend

I was in next this morning and came out with a very much wanted diffuser that was reduced from £24 to £12.00...ty fir sharing Johnny

Thanks for sharing this wonderful deals with us

Next clearance sale is having the good collection to buy it

Thank you for sharing, I can usually get a few good bits from here

Great hope to get in nice and early! Need some baby bits! Cheers!

I popped into store today. Got some good deals. Thanks for sharing this deal with us

Glad to hear you found some things you liked Sarah, thanks for commenting

Thank you for sharing this.....got some lovely bargains in there today...I just love next

I will defintiley have a look at this. Thank you for sharing

I will definitely show my mum this deal, she love's their sale! Thank you for sharing this

Thank you very much for your sharing

popped into one of their stores today. Will have to go to a better one next time, as there wasn't any decent things worth buying

I love the next sale. always olts of bargains to be had. thank you for sharing