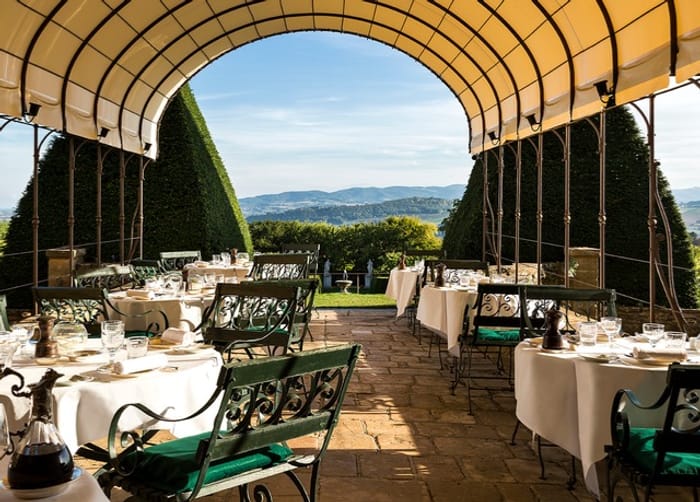 This unabashedly romantic château may appear quintessentially French, but it was rescued from ruin by a British couple who spent four years on its renovation. Château de Bagnols has got all the hallmarks of a fairy-tale castle, with a moat, fortified towers and rooms lined in plush silks and authentic paintings from the 17th century.

Each morning there’s a buffet breakfast spread to plunder, but it’s the lunches and suppers on offer at Michelin-starred Restaurant 1217 that are the real draw – think classic French gastronomy, such as roasted pigeon with wild mushrooms and seasonal game. Staying in the heart of Beaujolais wine country, the wine list is extensive, including 10 Beaujolais crus and a selection from neighbouring Burgundy.

Working off your indulgence is no trouble – the vineyards are frescoed by hiking trails and tennis and golf can be arrange nearby. Alternatively, slip into the spa for a relaxing treatment in one of the luxurious cabins, sweat it out in the sauna or take a dip in either the indoor or outdoor swimming pools.

In true Relais & Châteaux style the service is top notch, but it’s the accommodation that captures the most praise. All of the suites are sumptuously luxurious with a modern twist, but the period features are all genuine and beautifully preserved. Each suite is different: you may fall asleep under a vaulted ceiling or have a cavernous open fire crackling in the grate.

We have 793 Secret Escapes deals on Latest Deals.

What do you think of this Secret Escapes deal?