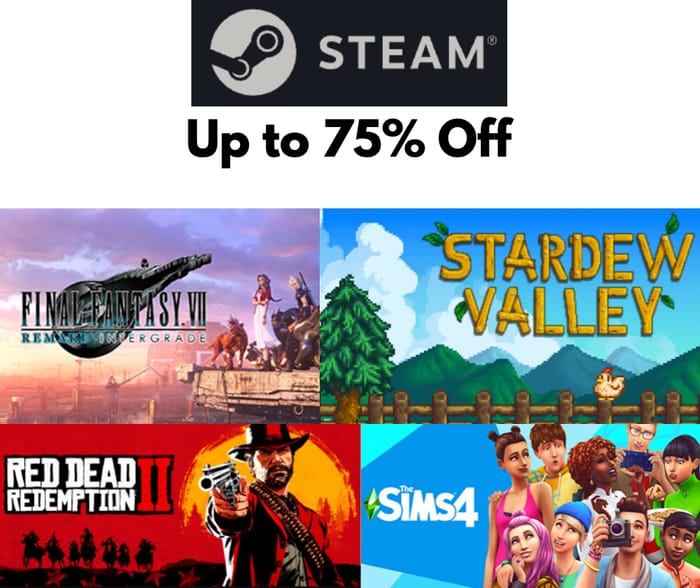 Available from Steam
17 people like this deal
Get Deal

The Steam summer sale officially launched on 23/6/22 and will continue until 7th July 2022 so don't miss out! You'll find some fantastic discounts across big name titles such as The Sims, Final Fantasy, Red Dead Redemption and many more. If you've been looking to treat yourself to a new video game recently, or you're shopping for your child, it's definitely worth checking out.

There's a whole range of different categories, including action, horror, shooters, role-play and many more. So matter what your preference is, you'll find some great options to choose from. Plus, be sure to download free titles such as Apex and Counter Strike.

Become an unrivalled sniper in the largest and most advanced World War 2 shooter ever built. Play in tactical third-person combat practice your longshots across huge levels as you liberate wartime Italy from the grip of Fascism.

Play the most popular life simulation game and discover a world of possibilities. Unleash your imagination and create your own unique world of custom designed Sims. You can explore and customise every detail from your Sims appearances to their homes and much more.

Carve your own clever path to vengeance in this award winning, Game of the Year addition adventure game from the creators of Bloodborne and Dark Souls. Take Revenge. Restore Your Honor. Kill Ingeniously.

Winner of over 175 Game of the Year Awards and recipient of over 250 perfect scores, RDR2 is the perfect action-adventure shooter. Play to uncover the epic tale of outlaw Arthur Morgan and the infamous Van der Linde gang, on the run across America at the dawn of the modern age.

Half-Life: Alyx is Valve’s VR return to the Half-Life series. It’s the story of an impossible fight against a vicious alien race known as the Combine, set between the events of Half-Life and Half-Life 2. Playing as Alyx Vance, you are humanity’s only chance for survival.

The virus won and civilisation has fallen back to the Dark Ages. The City, one of the last human settlements, is on the brink of collapse. Use your agility and combat skills to survive, and reshape the world. Your choices matter.

You've inherited your grandfather's old farm plot in Stardew Valley. Armed with hand-me-down tools and a few coins, you set out to begin your new life. Can you learn to live off the land and turn these overgrown fields into a thriving home?

Ghostrunner offers a unique single-player experience: fast-paced, violent combat, and an original setting that blends science fiction with post-apocalyptic themes. It tells the story of a world that has already ended and its inhabitants who fight to survive.

All Steam deals →
All Steam discount codes →
Reviews
3.7
from 3 reviews
Add review
Comments
What do you think of this Steam deal? Found cheaper elsewhere?

Thanks seems like some good games at good price

My son will be happy he uses this site quite alot.