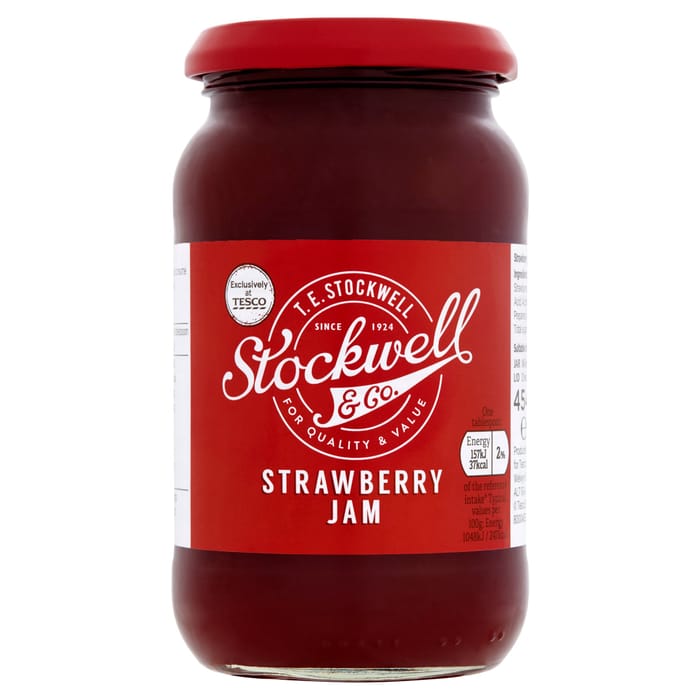 Available from Tesco
£0.28
122 people like this deal
Get Deal

Store in a cool dry place. Once opened, keep refrigerated and consume within 6 weeks and by date shown.

This jam is my favourite and so cheap! A lot of the Stockwell rang is tasty

Wouldn't buy anything else it's a fab all round jam x

This is a great deal for this jam! Im looking forward to having scones with this and cream

Just adding for the purposes of informing others - Stockwell & Co is the rebranded Tesco Value/Everyday Value! See "Ms Molly" products, as well.

So, this isn't really a bargain.

That's because it's Tesco Value :p That's the bad thing about this website - most members leave comments simply to up their points and there are very rarely discussions about the item at all.

If you say anything that the OP deems slightly negative (but I'm actually sharing facts) then the defensiveness comes out.

This jam very tasty and good flavour. Thanks for this item.good price

Thank you for posting this great deal, this is a really nice jam.

I did not write the comment to get points. If it was to get points I would have rambled on in the message. I just dont know how cheap you expect jam to be. Some people may not be aware of these basic brands so there is no harm in people sharing them

Thank you Adel28 for your positive comments, I agree with you, I really don't see what the problem is here myself, I thought 28p was an absolute bargain for a jar of jam regardless of what brand it is and that's why I posted it, enjoy!!

All I said was that these are the rebranded Tesco budget brand - which accounts for the price.

And I said "most" (about the comments left on here).

If you took my comment personally, up to you. Ultimately people are free to buy what they like, all power to them, but some may not know this (many don't, from other forums I've read).

No harm sharing, just as there is no harm leaving information to help other members.

Negativity is being rude for no reason, but I've stated my reasons - that's not rude. Some people just don't like being called out on the fact that it's not that great a deal (in my opinion, may not be yours).

I agree with you, however I would like to clarify the naming - you say that a 'bargain' isn't something that's regular price. I would put this definition to te word 'deal' and bargain being something generally cheap. I've used this Stockwell brand before and they aren't as cheap on other things, yet sure, for jam - that's a bargain, not a deal. orlandolk

Your welcome. Thanks for sharing. I think that is a bargain and other people have commented on it saying it tastes good so I will definitely be trying it

Love this jam. I all so make my own jam tarts with it. They are yumy thank you

I love this jam, it's a great price; I wouldn't buy anything else.

Cheap and best. Thank you so much for sharing the deal with us. I will visit instore tomorrow.

Wow that's a great price. Will definitely want a few of these. Thanks for sharing

I love this jam!!

this jam is very tasty and its really cheap, this is cool

Thanks for sharing this is perfect now the kids are home all the time. They geat through so much

Well this is a great deal . not seen jam this cheap for years. My grandkids love jam this will be great to have in.

Never tried this but looks very cheap, great find thanks for sharing

That's a great price for a jar of jam thanks for sharing the deal information.

Blimey. You couldn't make it for that price.

Definately worth a punt.