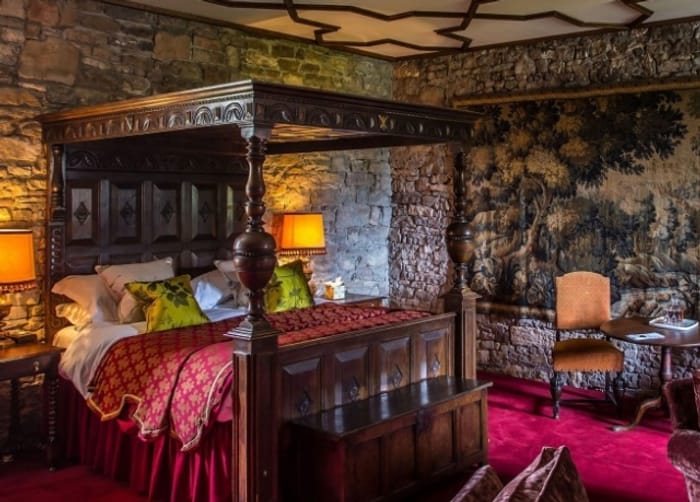 The 500-year-old Thornbury Castle is the country's only Tudor castle hotel and a stunning base for exploring the Cotswolds. Constructed in the early 1500s by the Duke of Buckingham, it has hosted such prestigious guests as Henry VIII, Anne Boleyn and Mary I, and keeps modern-day guests occupied with regal pastimes like falconry, archery and croquet.

Much of the castle dates back to the 16th century and retains period features like large open fireplaces, ornate carved ceilings, intricate oriel windows and shining suits of armour in the corridors. In good weather, lord it up in the castle's expansive walled gardens, where you can enjoy a peaceful stroll. Thornbury Castle carries a TripAdvisor Certificate of Excellence under its princely belt.

Food is served in a series of original dining rooms (including the grand-sounding Tudor Hall and Baron’s Sitting Room) once frequented by the likes of Sophia Loren and Laurence Olivier. The two AA Rosette-holding menu comprises modern and internationally-inspired dishes alongside a number of traditional English favourites, all featuring ingredients that are sourced locally or from the centuries-old kitchen garden.

Thornbury Castle's Deluxe Bedchambers are highly atmospheric, with medieval features like stone walls, carved ceilings and tapestries, and central heating among the modern amenities. They command beautiful parkland views and have en-suite bathrooms. Most have either coronet or four-poster beds, too.

How to get there

Thornbury Castle is a relatively straightforward journey from London due west along the M4 for two-and-a-half hours or so. From Bristol, it's roughly a 30-minute drive. If you're getting there by train, get off at Bristol Parkway and take a 20-minute taxi ride to the hotel.