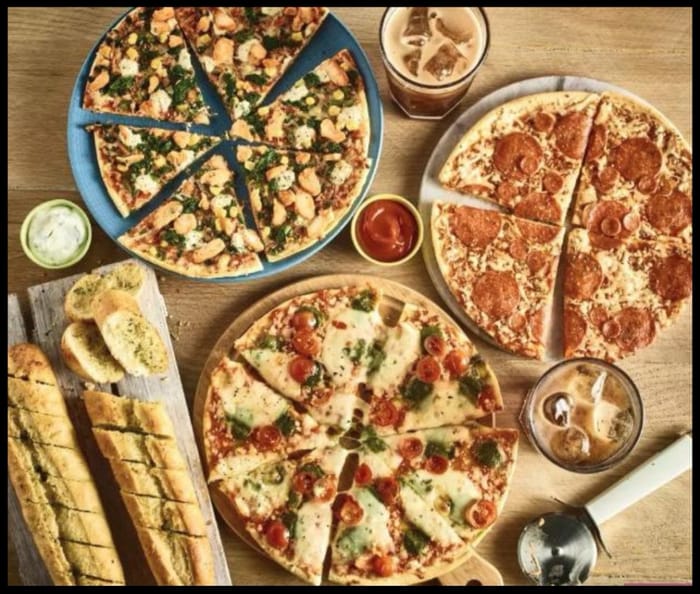 Available from Iceland
£5
111 people like this deal
Get Deal

Iceland are doing a deal from October 17 to 23 where shoppers can pick up three pizzas, a pack of two garlic bread baguettes and 1.5litre of Pepsi for £5.

To claim the deal, shoppers will have to visit a branch of Iceland between October 17 and 23 and pick up three Dr Oetker pizzas included in the offer.

You can choose from Pepperoni-Salami, Mozzarella, Pollo [chicken], or Funghi [mushroom].

You can then pick up one of three 1.5 litre bottles of Pepsi: Pepsi Max, Pepsi Max Cherry, or Pepsi Diet, which usually cost £1 each.

On top of that, Iceland's two-pack Garlic Bread Baguettes, which are normally £1, are also included in the deal.

Is this the cheapest price? Find out with our free supermarket price comparison app. Compare Iceland with Sainsbury's, ASDA, Morrisons, Tesco, Iceland, Ocado and Waitrose.

We have 1,970 Iceland deals and 249 Iceland discount codes on Latest Deals.

What do you think of this Iceland deal?

Thanks for sharing will have a do this .

Any source info? Last Iceleand 'meal deal' I went for was none existent in my local and no promo in store to show it either.

I think the last one was online only

looks good count me in

Ooohhh what a great deal! This would be great for dinner. Will get this tomorrow for tea lol

It doesn't start until 18th October, but it's a brilliant deal. Might be worth getting stocking up on pizza while it's so cheap.

CherylParry ohh I didn't realise the date lol yes it's worth stocking up! Thanks for that

Thanks for this. Will have to get a few lots of these

Thanks, heard about this deal and is similar to the 2 pizza, Pepsi & garlic bag deal recently. Yay, this is even better with 3

Yum, time to stock up the freezer again! Ristorantes are delicious and I havent had one in some time

Mmm I love the Ristorante ones. Definitely going to be popping into my local Iceland soon. Having an early Halloween movie night with friends, I promised snacks so this will be perfect. Thanks for sharing

We love Ristorante pizzas in my house. Will be deffo getting a couple of these deals. Thanks for sharing x

Will be getting this for the freezer! Great alternative to expensive takeaways :-)

Great value find many thanks

Iceland always comes up with pretty good deals......specially with pizzas.

A great deal, thank you for sharing

Let's party pizza all round thanks for your tireless work

Thank you for sharing this. I am looking forward to this deal. It's very good value for the money.

I am in, thank you for sharing.

Would make a great addition to the empty freezer

Fab thanks for sharing xx

this is a really cheap deal and great for when you don't have time to cook.

Compare Iceland prices with other supermarkets →