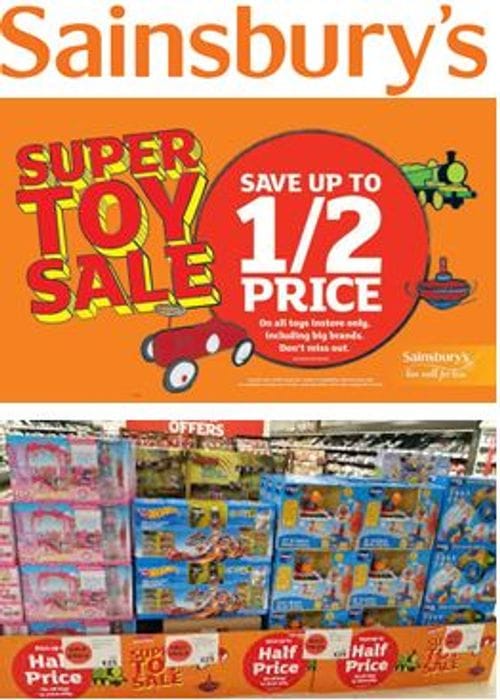 When is the SAINSBURY'S HALF PRICE TOY SALE 2021 Start Date?

Available from Sainsbury's
95 people like this deal
Get Deal

Update from Latest Deals - Sainsbury‘s says the toy sale will now be running from 10th-16th November: later than planned due to shipping delays.

Update from Latest Deals - We have received the following email from Sainsbury's:

"Every year, we like to put on a special toy event to help you get some presents tucked away early for Christmas.

"We wanted to share with you that this year the toy event will be happening in November, helping you to spread the cost of Christmas. As always, there will be bargains on toys and games from the biggest brands that you won't want to miss out on.

"Look out for further updates on our special toy event.

"We'll be back in touch soon to let you know more about the event, with details of exactly what you can save."

This is interesting as Sainsbury's say that the toy event will be happening in November. If true, this would be a change from the norm. Perhaps it is down to logistical supply chain issues, or they just want to try something new, or try to combine sales with Black Friday deals which also start in November.

The question then is, when in November is the Sainsbury's half price toy sale? emmabeckz, a colleague of Latest Deals, said, "Perhaps 10th November."

Mark your diary now! Note that the Sainsbury's Half Price Toy Sale will be in-store only, not online.

Many toys were on offer at a full 50% discount, and most of the sale toys had at least 20% off. I think we can expect very similar in the October 2021 Sainsbury’s Half Price Toy Sale.

If you're after specific toys, it's well worth doing a price check in advance of the sale, especially at Amazon.

It's generally hard to beat the Sainsbury’s Half Price toy deals. That said, the 20% off - 33% off toy deals at Sainsbury's are often actually cheaper at Amazon and elsewhere. In previous years Amazon have often price matched the best Sainsbury's toy sale deals...once they know what they are!

I’ll update this post nearer the time with the confirmed date once the start date of Sainsbury’s HALF PRICE TOY SALE 2021 is official!

Is this the cheapest price? Find out with our free supermarket price comparison app. Compare Sainsbury's with Morrisons, ASDA, Tesco, Iceland, Ocado and Waitrose.

What do you think of this Sainsbury's deal?

emmabeckz
LD Team
a month ago

I will be there as usual getting all the photos and posting them too!

Very happy to hear that!

The date has changed to November, hate you to have a wasted trip x

Thank you Johnny. I am waiting for this sale,need to get some Lego for my friends kids.

I love it, but our Sainsburys has really reduced their toy selection due to an instore argos now. Hope they make more space for this.

This is definitely my favourite time, I will be going to my local store 30 miles away

Great will get hold off this see what I can get the kids for Christmas. Thanks for sharing

You're welcome, but please read my post first. It's not started yet!

Thank you for sharing this deal , much appreciated. We'll have to go and have a look , I will tell my sister too. She'll appreciated it as well

Their sale is usually epic. I can't wait. Thanks for posting.

Thanks for sharing, I always go and have a look when this is on.

best time to spend your nectar points. I'll keep an eye out for that too

This is a great heads up for the sale. Will let my daughter know thank you for posting this.

I have never been on their toy sale before and I have just a small shop in my town. Does it still worth to look it, even of it jusy a small shop?

Actually this has been delayed until November

Anyone know the new date for November please x

Thank you for sharing all the details, I'm hoping to get the last of my Christmas items in this sale.

Does anyone know if the date is the original October 13th or the new moved date November 3rd? Thanks very much

stepharnold88 I was just going to ask the same thing

sarah4701 I spoke to someone in Sainsbury’s today and they confirmed it’s NOT on next week but they wouldn’t confirm when exactly it was, hope that helps

stepharnold88 saves me a trip next week thank you

stepharnold88 thank you for finding out for us , that's very helpful

. Thank you for sharing with us

Is the sale on please?

I was in Sainsbury's today and it hasn't started as yet.

Compare Sainsbury's prices with other supermarkets →