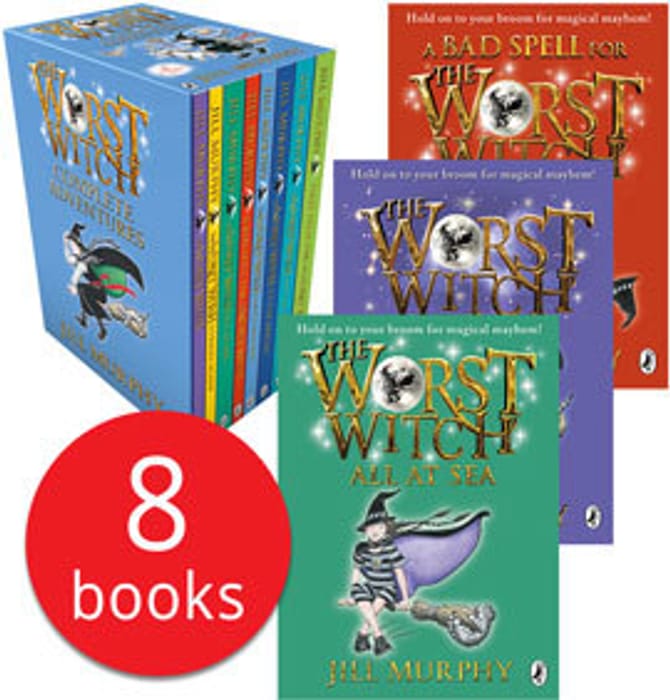 Stories to leave your children spellbound...

This collection brings together all eight books in Jill Murphy's classic The Worst Witch series including the latest addition, First Prize for the Worst Witch.

The stories inspired the popular CBeebies adaptation and introduce Mildred Hubble and Miss Cackle's Academy for Witches. Mildred is excited to be studying and training at the school but she's not leaving the best impression. She keeps making mistakes like getting spells wrong and crashing her broomstick. Despite her clumsy ways, everything is going well and she's enjoying the school but then she manages to turn Ethel, the teacher's pet, into her deadly enemy...

Throughout these eight books, Mildred has to deal with arch-enemy Enid Nightshade; finds herself turned into a frog; and makes plans to ensure she will not be the worst witch in her class every single year...

Titles in this collection (8)

A Bad Spell for the Worst Witch

The Worst Witch All at Sea

The Worst Witch Saves the Day

The Worst Witch to the Rescue

The Worst Witch and the Wishing Star

First Prize for the Worst Witch

Tom's Tips for The Book People

What do you think of this The Book People deal?

You are welcome julie781x . I did think it was a good price.

Thanks for sharing I loved these when I was young and I know my daughter will too.

You are welcome, I always liked TWW

I remember reading these books as a kid, would make a lovely gift thank you for sharing

I loved these books as a child, I've already started reading them with my 5 year old. This is a great price x

Very glad that you liked the deal. These books are a fun read and I hope your 5 year old with love them.