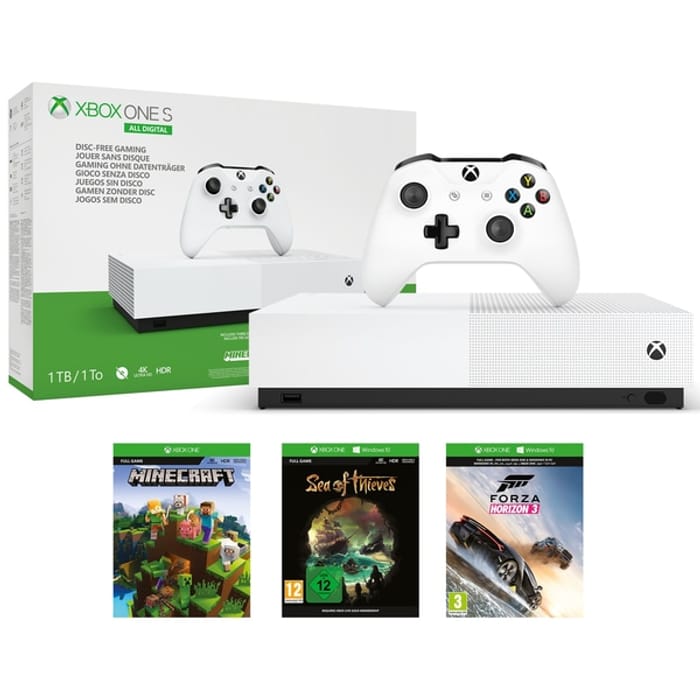 Pick up where you left off on another Xbox One or Windows 10 PC with Xbox Play Anywhere titles like Crackdown 3 and Gears Of War 4.

Your games and saves travel with you: just sign in on any Xbox One with your Microsoft Account and you’re ready to go.

Stream your gameplay on Mixer with the touch of a button.

Does not play physical discs. Games are downloaded and ready to play when you are; no need to worry about discs.

Play over 2,200 games including more than 200 exclusives and over 550 classics from Xbox 360 and Original Xbox.

The only console designed to play the best games of the past, present and future

Go all digital with the Xbox One S All-Digital Edition and enjoy disc- free gaming with three great digital games included: Minecraft, Sea of Thieves, and Forza Horizon 3. Build a library of digital games in the cloud that travels with you; never lose, scratch, or struggle to find a new game to play. Expand your options with Xbox Game Pass (subscription sold separately): discover over 100 great games, download titles you’ve always wanted to play, and revisit old favourites. Cloud saves let you take your games on the go, continuing the game on any Xbox One when you sign in with your Microsoft Account. Preorder and pre-install upcoming games so you’re ready to play the moment they launch. Whether you’re gaming, watching 4K entertainment, or streaming your gameplay on Mixer with the touch of a button, there’s never been a better way to game with Xbox One. (Sea of Thieves requires an Xbox Live Gold subscription, sold separately.)

Awesome price. Thanks a lot for sharing this...

Omggg I think this is amazing price for the new Xbox one s..definitely tell my friends about this