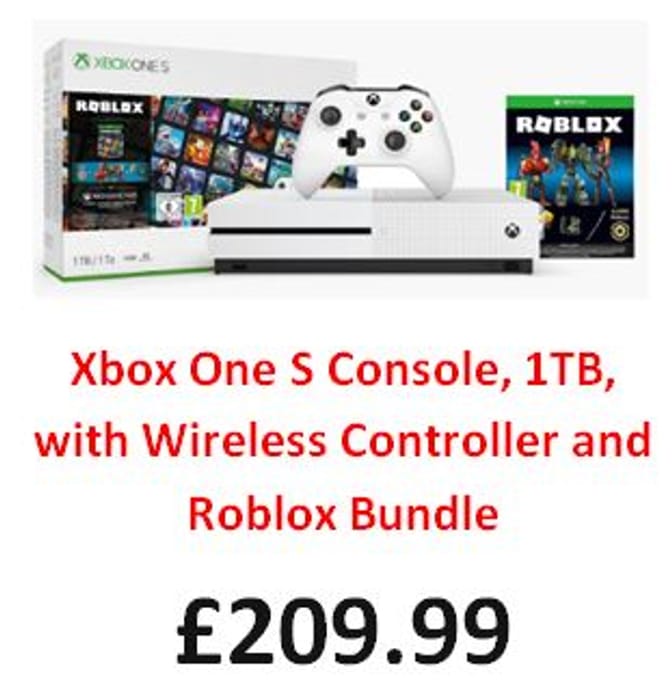 Available from John Lewis
£209.99
13 people like this deal
Get Deal

This bundle includes an Xbox One S, 1TB console, a wireless controller, a free-to-play download of Roblox, three exclusive Roblox avatar bundles, as well as 2,500 Robux.

Xbox One S introduces HDR and up to 4K Blu-ray as well as streaming. The internal power supply and new form factor mean that it's 40% smaller than the previous model.

Experience richer, more luminous colours in games, with a higher contrast ratio between lights and darks, High Dynamic Range (HDR) technology brings out the true visual depth of your games.

If you have a 4K television, why settle for last generation technology? With four times the resolution of standard HD, 4K Ultra HD delivers the clearest, most realistic video possible. Stream 4k content on Netflix and Amazon Video and watch Ultra HD Blu-ray movies in stunning visual fidelity with High Dynamic Range. Additionally, if you‘re lucky enough to have 3D television, you can play your 3D Blu-ray disks, too.

Configure your Xbox One S to turn on other devices, like your TV, audio/video receiver and cable/satellite receiver. Whether you’re playing a game or watching a movie, the integrated IR blaster will get you to the action faster, allowing you to leave your remotes behind.

Experience the enhanced comfort of the new Xbox Wireless Controller, featuring a sleeker, more streamlined design. Get up to twice the wireless range. Stay on target with textured grip. And with Bluetooth

With games, TV, movies, music and sports all in one place, you don’t have to compromise. Switch instantly from one to another, or enjoy an app and a game side-by-side so you never miss a moment. It's all the entertainment you love. All in one place.

With millions of players around the world, and more than a decade of multiplayer experience, Xbox Live is the proven place to play. And now, everyone is invited to experience smarter matchmaking, less waiting, and better performance with Xbox Live on Xbox One. You can even record, share and broadcast your moments of glory.

Get set to explore millions of immersive 3D worlds, thanks to a free-to-play download of Roblox, that will helpfully be delivered directly to your console during set-up, so there are no codes required.

Discover an ever-expanding, user-generated universe where the gameplay is as limitless as your imagination.

There are also accessories, such as:

You even get 2,500 Robux to splurge on accessories, gear, and more for your Roblox avatar or additional content.

Roblox digital content must be redeemed by December 31, 2023. Users must accept Roblox Terms of Use (www.roblox.com). Significant storage required.

Will certainly keep the kids entertained over the next few months! Strange how the original Xbox one S with the disc drive is cheaper than the new “all digital” one without it!

Thank you very much for sharing, this is a great price with a game