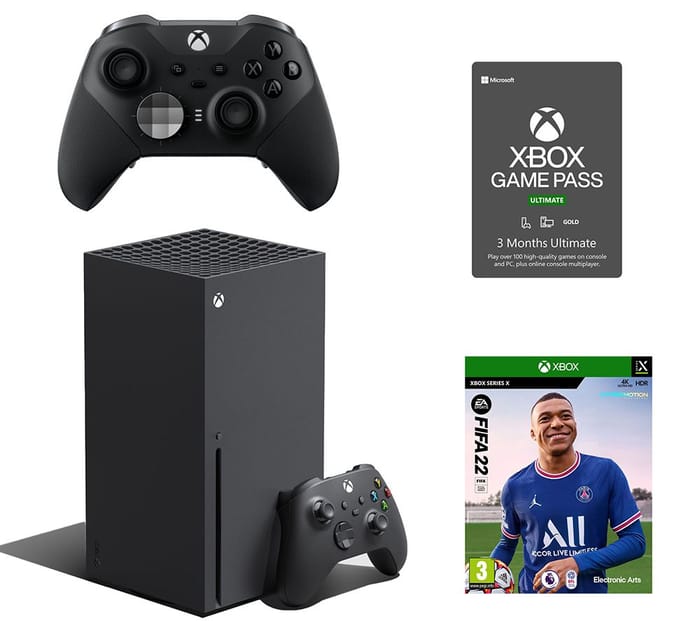 Available from Currys
£679
6 people like this deal
Get Deal

Experience a new generation of gaming with the Microsoft Xbox Series X.

A state-of-the-art performance requires state-of-the-art cooling. That's why the Xbox Series X features parallel cooling architecture. The unique split motherboard design keeps components at an even temperature, while the whisper-quiet fan won't distract you from the final boss fight.

With its sculptured surface and refined geometry, the new Wireless controller is a thing of beauty. Take aim with the textured grip and hybrid D-pad and share your gameplay at the click of a button. Pairing with the Xbox Series X in seconds, you can seamlessly switch between compatible consoles, PCs and mobile devices.

Play like a pro with the Xbox Elite Series 2 Wireless Controller. Everyone plays differently, and now you've got the ability to adjust your controller in loads of different ways.

You can enhance your aiming with the upgraded thumbsticks – they're adjustable so you can change the tension to suit you. You can even change the thumbsticks to a different set if you prefer – there's 3 different options included. And there's different paddle sets too – customise the controller to suit how you play.

Want to customise the keys? It's easy with the Xbox accessories app. You can even use assign voice commands like “record that” or “take a screenshot”.

The Series 2 Elite Controller is also designed for speed – fire faster than ever with new and improved triggers. And with a textured rubber grip that wraps around to the back, the Xbox Elite Controller looks and feels great.

Play the most immersive, realistic and authentic football sim – the all new FIFA 22. Whether you're just playing a quick match with friends or challenging yourself in the career mode with your favourite team, you'll love the updated gameplay, physics and reinvented AI.

Bring more composure and consistency to the most important position on the field – the goalkeeper. The rewritten goalkeeper system adds whole new levels of intelligent decision-making and allows the goalie's unique personality to be reflected in their positioning and style.

The Game Pass Ultimate is all the great stuff you get with Game Pass (hundreds of games to play for one monthly payment and Xbox exclusives on launch day). But now, you've got Xbox LIVE Gold included too. So you can play online with friends and get the most out of online co-op or multiplayer.

Currys offers free delivery on orders over £50. For orders less than £50 the charge is £4. You can get free click and collect.