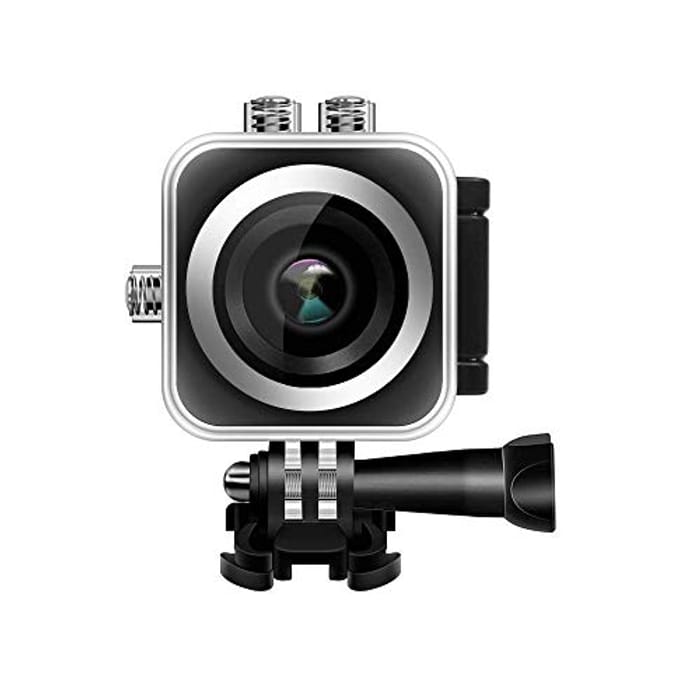 Available from Amazon
£9.99
6 people like this deal
Get Deal

Take it to anywhere you want to go and never worry about it’s safe-----Waterproof up to 98' (30m) with rugged waterproof encasing(included in the package) which is designed to withstand extreme environments and conditions.With our Complete and high quality accessories,you can easily make the camera firmly fixed in the helmet, bike and tripod, and self-timer.

Others may be cheaper,but we are better---Equipped with 170 degree wide-angle lens,Video Resolution up to 4K 1080P 30fps/720P 60fps.smart image stabilization function and built-in microphone.Smart phone remote control with powerful APP.AND OF COURSE 100% SATISFACTION GUARANTEE. If you aren't happy with this camera for ANY reason within 30 days of purchase, let us know and you get your money back!

Brilliant price but much of the spec is marketing and not true. It isn't 4k it looks to have a 5MP sensor not the Sony listed and will offer native resolution video recording up to 1440p and still images up to 5MP. You are wasting battery runtime and storage card space if you go above that. If you want to interpolate above those resolutions use software on your PC it will do a better job.

What's the three legged?!? Do they include a mini tripod? It isn't shown in the images. Also who does a what's in the package and then lists optional items??

Lastly it isn't 360 degrees because it only has one image sensor, a typical 360 camera would need a sensor facing forward and another facing backwards to give 360 view. However in the spec at the bottom they clearly state 210 degree view that is the true view.

Still brilliant value though, no question and capable of good results based on the spec. Sometimes these go cheap because app support has ended and its no longer available to download on the app store. If there is app support for the moment once you've downloaded and installed it I would email the apk to yourself in case it disappears shortly after. I've got action cameras like activeon models where I've had to keep copies of the apk because they are no longer available on the play store as the company is out of business and their apps have been removed. If you can't find the right app look for the same camera under a different brand or look for an indentical spec. I think there is a kitvision model with identical spec to this but the case is slightly different, both may be based on the same electronics and make use of pretty much the same app created by the manufactuer of the chipset.

BonzoBanana would this attach to a projector and laptop to record eg an art workshop on a table from above. Obvs id need a tripod.. Thank you

JaneRichmond There's a video here with some information. Seems to be good quality and a bargain for a tenner. Nice little camera if you have a VR headset.