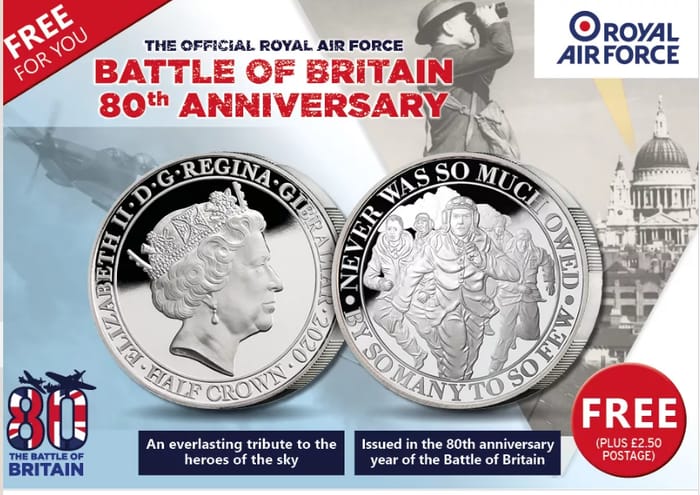 In the 80th anniversary year of a pivotal turning point of the Second World War, The Battle of Britain, a brand new commemorative coin has been released in official partnership with the Royal Air Force - remembering the airmen and airwomen of the RAF who lived, fought and died in a campaign that changed the history of the world. This everlasting tribute to their finest hour is FREE as a gift to you.

The First Battle Fought Solely in the Air

In the summer of 1940, Winston Churchill in his speech famously said that “the Battle of Britain is about to begin”, and in the next month it did.

The Battle of Britain served not only as an example of the importance of airpower in warfare, but also highlighted the important role played in the battle by the members of allied nations. Pilots who had escaped from Poland and France joined British and Commonwealth pilots in defending Britain from invasion, as well as beginning the fight back against Germany.

As Germany failed to establish air superiority, the Battle of Britain was the first major defeat of Hitler’s military forces and is regarded by several historians as a crucial turning point of the Second World War. Winston Churchill summed up the effect of the battle and the contribution of the RAF with the words, “Never in the field of human conflict was so much owed by so many to so few”.

You only have to pay postage if you decide to keep the coin. If you decide that you don't want the coin then you just return it. We remember those who fought and those who continue to fight for all of us.

HelenPacker Thank you so much for adding that Helen, you know, I didn't even realise that myself until you told me, teamwork!

JoTarpley teamwork makes the dream work my dear friend. You are doing an amazing job finding and sharing amazing freebies and competitions.

excellent thanks for adding this, I always order the free ones for my so who is two and collect them for him for when he's older

thank you for sharing this ! good collective coin

It is a nice looking coin, perfect coin to help remember anniversary of The Battle of Britain. Thanks for sharing this