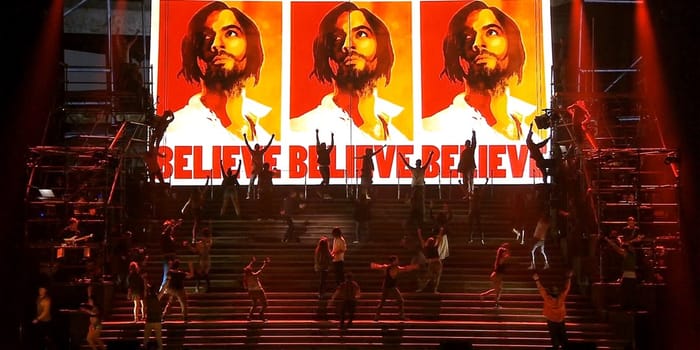 Theater and Dance Shows to Watch Online This Easter Weekend

Available from Travelzoo
23 people like this freebie
Get Freebie

It's still possible for performing arts buffs to get their fix of top-notch theatre and dance, as so many organisations are stepping up and offering streams of some of the best shows around the world. With musicals, comedy, plays and more on the bill, and no queue for the loo, your sofa will be the best seat in the house.

Sir Andrew Lloyd Webber’s legendary rock musical, “Jesus Christ Superstar”, will be available to watch from 7pm on 10 April via the musical maestro’s new YouTube channel, “The Shows Must Go On!”. You have 48 hours to enjoy this “arena concert phenomenon” (The Independent), which stars Tim Minchin, Ben Forster, Chris Moyles and Melanie C. And if that’s not enough to quench your musical-theatre thirst, there’ll also be behind-the-scenes footage available to stream. It’s completely free – although there is an option to donate to a charity.

"Fleabag Live" was one of 2019’s hottest shows, swiftly selling out in both London and New York. If you missed out on tickets, now is your chance to finally watch the award-winning performance -- and support charitable causes while you’re at it. Download a 48-hour stream for £4 from Soho Theatre On Demand. All proceeds will go to help health workers and theatre freelancers.

Enjoy the magic of Shakespeare’s Wooden O from your sofa this weekend. The Globe is broadcasting a free selection of the Bard’s much-loved plays on YouTube every fortnight, and you can currently watch "Hamlet", starring Olivier Award-winner Michelle Terry.

You can have all the fun of the fair in your own living room tonight. A 60-minute special will launch on Cirque du Soleil’s new content hub at 8pm on 10 April, showcasing awe-inspiring moments from three of their top shows -- "Alegría", "Kooza" and "KÀ". The spectacle will be available alongside fitness videos, performance tutorials and behind-the-scenes footage.

Spend a digital night at Russia's most famous theatre. For the first time ever, Moscow’s Bolshoi Theatre is streaming some its most popular performances. Tonight's release is Tchaikovsky’s classic ballet "The Nutcracker", but you’ll have to be quick – it’s available from 5pm on 10 April, for one night only.

It’s a case of the show must go online at the Royal Opera House, which will be broadcasting a different opera or ballet production on its YouTube channel every week. Tonight, you can catch Mozart’s comedy-opera "Così Fan Tutte" – billed as the “funniest show in town” by the Daily Express. The stream is completely free so you can satisfy your cultural cravings without spending a thing.

We have 133 Travelzoo deals and 36 Travelzoo discount codes on Latest Deals.