How Will the Sainsbury’s and Asda Merger Affect You?

Sainsbury’s and Asda have announced plans to merge the two businesses together.

The two brands will stay separate if the proposal goes ahead, but there are still questions over how the merger could affect customers.

Will there be closures?

As there are almost 300 Asda and Sainsbury’s in the same locations, many are worried that the merger will mean that stores close to each other could close.

But Sainsbury’s has said that there are no planned store closures as part of the merger deal, and both brands will continue to operate side by side.

However, the deal still needs to be approved by the Competition and Markets Authority, CMA.

To get approved, up to 75 Asda stores could close, according to GlobalData.

Patrick O’Brien, retail research director at the firm, said, “While there are no plans to close any stores at this time, regulators will be looking to see how many Asda stores are in close proximity to Sainsbury’s stores.

“75 Asda stores have a Sainsbury’s in the same sector, and we think these 75 stores would be the absolute minimum the CMA will want disposed of.”

An exact number of closures will be announced if the merger goes ahead.

Will prices go up?

Some customers are worried that the merger will decrease competition, which could lead to prices going up.

This is a similar worry over the Npower and SSE energy deal.

The CMA said that it will assess whether the deal could reduce competition and lead to price increases.

It said, “If a potential reduction in competition is identified, it would be referred for an in-depth, Phase 2 investigation lasting up to 24 weeks- unless the merging parties offered immediate proposals to address any competition concerns identified.”

But Sainsbury’s and Asda have said that prices in either stores won’t go up.

Sainsbury’s said that it actually expects to lower prices by around 10% on products that customers buy regularly.

Will jobs be cut?

Another worry that employees have is that jobs could be cut.

If stores are closed as predicted, then jobs will be lost as a result of this, however at this point it is hard to estimate a number.

Business minister, Andrew Griffiths, said that he could not confirm if there would be job losses at the companies’ head offices, after Labour former cabinet minister Hilary Benn asked for assurances that jobs in the Asda head office in Leeds were safe.

Mr Griffiths said, “Any merger will seek to improve efficiency and value for money for shareholders and to improve productivity.

“The reassurances that we have been given so far by Asda and Sainsbury’s is that there will be no job losses within the stores.

“I cannot confirm as yet the impact that it would have had on the head offices other than the confirmation that we have been given that both head offices will be kept on.”

How will farmers be affected

Another concern is over farmers and suppliers facing a possible collapse due to the greater bargaining power of the two supermarkets, which would control 31% of the market.

“Indeed, the statement promised to bring prices down for consumers, but it is feared that this will be at the expense of suppliers, farmers, and manufacturers, whose prices and terms will be driven down, pushing many to the edge of collapse.”

Sainsbury’s and Asda have not yet responded to this query, and have also not clarified how the price reduction on products will be made.

Ministers also questioned how distribution centres will be affected.

Mark Menzies said, “The business minister should focus particularly on the jobs in distribution centres- many of them are in working areas of the country, and it’s the distribution centres that will be absolutely hammered a year or two years down the line if this merger goes ahead.”

It is expected that more detail of the merger will be revealed in the coming weeks, which will give further clarity to this issue.

my top concern is if they are going to keep the A.P.G scheme lol

Well said! I love the APG scheme myself, and use it all the time!

HeatherJenk I'll be gutted if they do away with that

got £13 if shopping yesterday for £2.44 using these and that includes a big bold 2 in 1 and the new lenor secrets 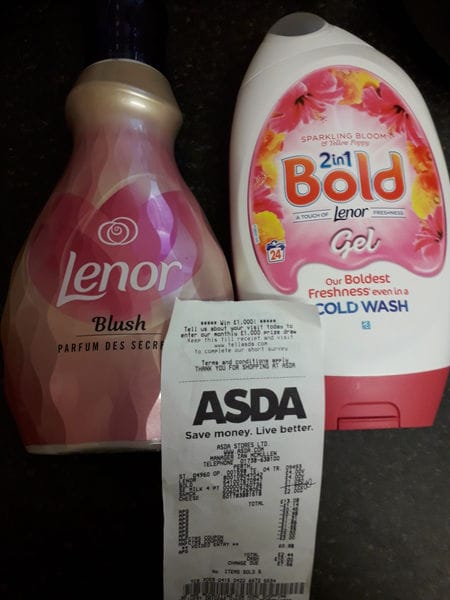 I do not understand how ASDA will hit the Sainsbury's standards in any ways, from cleanliness to treating the staff.

I am not worried about pricing, because currently there are hundred of products are cheaper in Sainsbury's than Asda any ways.