Retailers have kicked off their Christmas sales early this year, as some slash prices by over 80%.

The UK’s winter sales, which traditionally start on Boxing Day, have followed in the footsteps of Black Friday this year, by starting their discounts earlier than expected.

Shoppers who didn’t splurge on Black Friday and held off until December will be better off than those who bought into Black Friday deals.

Brands including Argos, Debenhams, Tesco, and John Lewis have cut up to 50% off items, while some bargain hunters have spotted reductions of up to 83% in supermarket aisles.

Analysis from the Office for National Statistics and the Centre for Retail Research found that this could be a record breaking week for retailers, and could be even bigger than Black Friday.

Bargain hunters who have left their shopping to the last minute will be able to cash in on the best deals, as retailers have cut prices in order to make up for poor sales due to last week’s snow and icy conditions kept consumers indoors.

Lisa Hooker, consumer markets leader at accounting firm PwC, said, “As we approach Christmas itself, we are already seeing a rise in promotional activity.

“Retailers are trying to attract customers through their doors and clear festive stock, particularly as last week’s snow and ice put a dent on high street turnover across large parts of the country.

“We are expecting to see more bargains for shoppers in the coming week, with more retailers offering promotions that they did on Black Friday.”

Retailers have already been slashing prices on luxury advent calendars from 2017, with some being discounted by £70.

Here’s a roundup of what retailers have started their winter sales early: 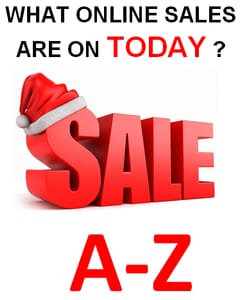 What Stores Have Online Sales Going on Right Now in the UK? Or have started their Boxing Day Sales early? Here’s an A-Z list!