Did Anyone Else 'Win' a Vip Trip to the UEFA Champions League Final?

We here at Zavvi would like to wish you a huge congratulations as you have been chosen as the winner of our Mastercard competition, winning a VIP trip for two adults to attend the UEFA Champions League Final Madrid 2019

However it transpires Zavvi may have sent this email to it's entire subscriber list.

When I saw the email I instantly knew it wasn't true, as to win the competition you had to buy items on Zavvi with a Mastercard during a set period, which I hadn't done. However, I did think it may have been some sort of scam, given Spurs win last night, which means an all England final and consequently a great deal of interest from UK fans.

There is now going to be a lot of very disappointed people who thought they had won. Hopefully, Zavvi will feel obliged to give a free voucher to everyone who received the 'winning' email.

ACR
10 months ago
What do you think of this?

I thought I'd won. Checked the email and where it was sent from because I thought it was fake at first but then saw it was legit from Zavvi. Felt a bit stupid when I found out lol.

Sorry to hear that Vegamo This is a major fail for Zavvi. I wouldn't want to be the person responsible for this embarrassing mistake, I bet he/she is not having a good day. I'm surprised I haven't yet received an apology/explanation follow-up email from Zavvi - are they trying to decide how to respond or pretending it didn't happen

ACR I was disappointed I didn't receive an email apology. They apologised on Twitter but I wouldn't have seen it if it wasn't for the BBC News because I don't follow them on Twitter. It really is poor customer service. I really hope they find a way to make up for this mistake.

KelanOK I was only aware they'd sent the notification to everyone when I saw the BBC article. I've also read in another online article, from the Independent, the original Twitter apology post has now been deleted. However, just a couple of minutes ago I did finally get an apology email. They have included a 15% discount code.

ACR That's a new RIP OFF - sending discount codes to disappointed people. Even with a 15% discount they'll probaby still be making a big profit.

ACR Do you genuinely believe this to be a MISTAKE. In my opinion it's probably just a way of making those who now receive the 15% discount think some compensation is being offered.

The sad part is that some offered the discount will actually use it - leaving Zavvi with a massive profit.

Call me cynical if you wish but I've seen so many RIP OFFS that I view things like this as just another.

davidstockport I completely agree. At least I was aware something was off when I saw the email. But, I can imagine the initial elation of others who thought they'd won only to find out it was a mistake. There are going to be a lot of dejected and annoyed people. This is a serious PR fail.

ACR Unfortunately the gullibility of many people (I wouldn't mind betting most of those entering the competition weren't interested in football) will allow this to go unchallenged.

I find it almost impossible to believe that notifications of a win were "accidentally" sent to every entrant.

A company notifying people of wins should be compelled to honour their notifications - even if it bankrupts them.

Although different in some ways Hoover were placed in that position some years ago.

davidstockport I think it was a genuine mistake. It is quite easy to accidentally copy everyone in when you're sending an email. It's happened before, but probably not for a winning confirmation email. This will be damaging to their brand. There will be people who are incredibly upset by this error. The demand for tickets to the final is going to be huge and many would have loved to win this competition.

ACR It does appear from things said here that there was a considerable delay in notifying people of the "error" nipperjwb said she wasn't informed until she messaged them.

Yeah I got one too, asked my Dad if he fancied going with me and he was really chuffed, just had to break the news to him that it was an email sent in error.

The 15% off code is frankly insulting, I know they can't possibly honour the original prize but 15% off is laughable.

Just been and closed my Zavvi account, not a company I will ever spend a penny with again.

I have shut mine too.

Yes I did !! I was absolutely gutted when I messaged and they said it was a mistake. I have received an email this afternoon offering 15% discount by way of apology but as far as I’m concerned they can stick it where the sun don’t shine 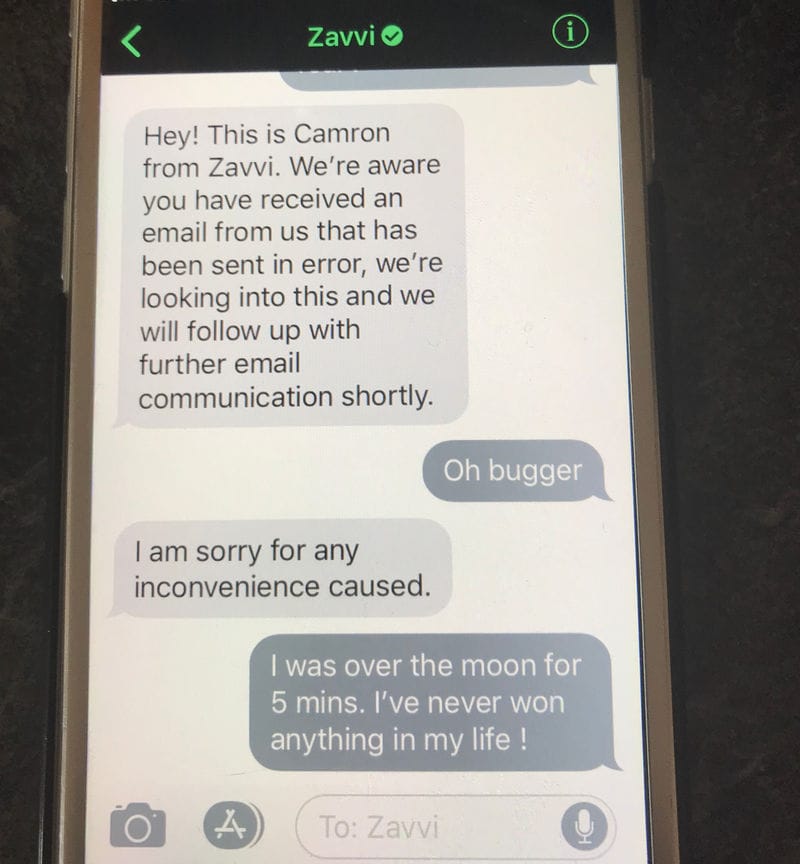 nipperjwb this competition has turned into a bit of a nightmare for everyone.

I notice the word SORRY wasn't used in their first communication.

Second should be an APOLOGY for sending it - not for the inconvenience caused. 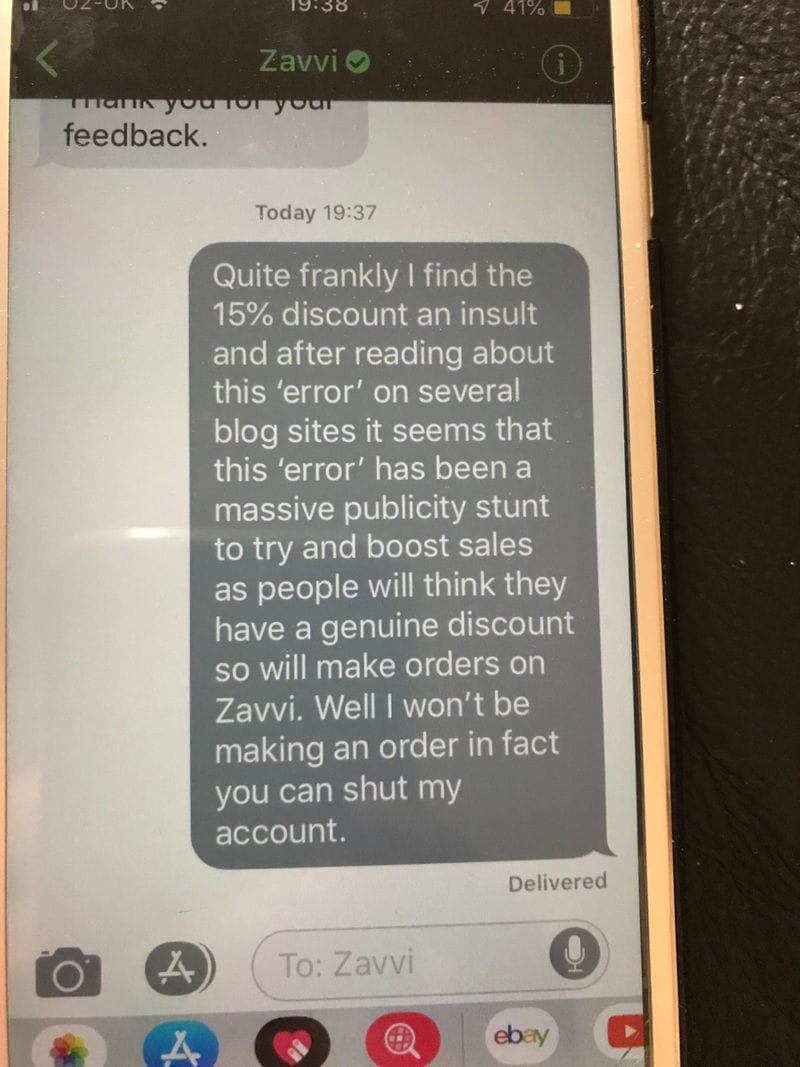 If I read that I won something, I'd need to see physical evidence before I'd start making plans so while it kinda sucks the Zavvi drama.. people need to get over it. They made a mistake.

Anyway, I'm more disappointed at the fact that Zavvi charges 99p for delivery because it used to be free and even if it's an order of £200 you still need to pay 99p. lol

Which part of an email or text, from a genuine website, saying you've won a prize isn't physical evidence?

In my opinion the evidence is on a par with seeing the lottery numbers you chose being drawn.

Things I've read elsewhere suggest that many had made plans, some of which involved cancelling holidays, before it was revealed as a "mistake".

I can understand their disappointment and annoyance.

I wonder if the ACTUAL WINNER (if there is one) has been announced, I also wonder (if there is an actual winner) whether he or she believes it yet

Well, you would only actually believe you'd won if you entered the competition..

I don't own a mastercard, I have no interest in football and I knew I never entered the competition in the first place..

When I received the email I clearly knew there was something off about it and just deleted it.

I agree to the ones that had actually entered that it was a bit of a crap outcome and they didn't handle it very well, but everyone else is just jumping on the boycotting bandwagon.

It could very well have been a sales technique but who knows.

This doesn't come as much of a surprise, but Zavvi did break advertising rules over this debacle - https://www.itv.com/news/2019-10-02/zavvis-champions-league-competition-winners-email-broke-advertising-rules/