What is the Difference between Made in Britain and Produced in Britain?

I find this confusing, not knowing the difference. Have googled this and am non the wiser. I wonder if it influences anyone’s choice when purchasing?

BlueEyesX
2 weeks ago
What do you think of this?

It means exactly the same thing google gives you answer 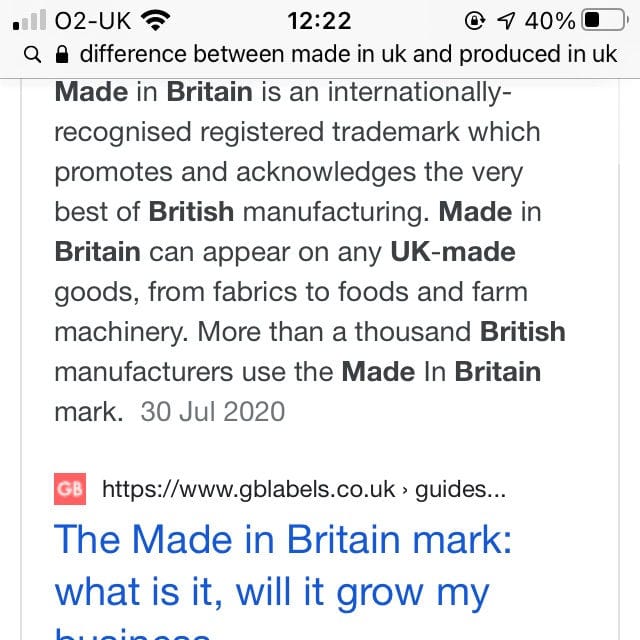 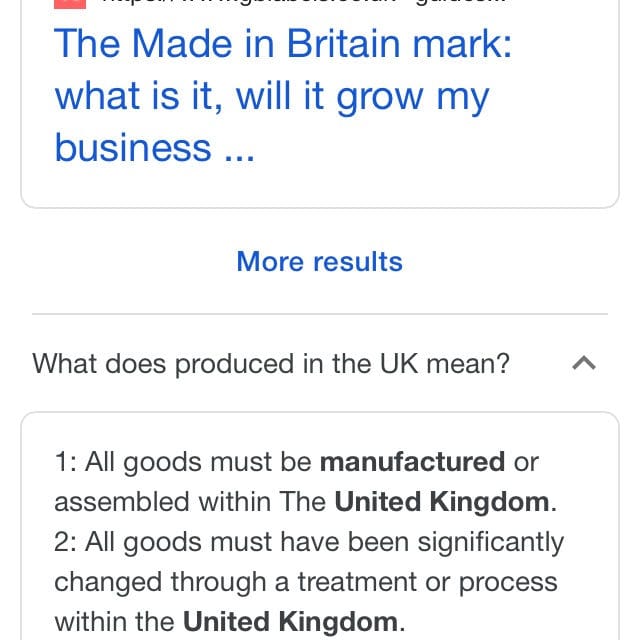 Produced in Britain means that, although developed elsewhere, the product is manufactured in the UK using local labour.

Example: iPhone is developed in California but assembled in China, so a Chinese can say "Produced in China"

Typically, it says "made" than "produced." It's part of its label/signature.

It sounds like they are same thing just Made in Britain supposedly makes its more accredited because the company have to go through more tests, follow stricter rules before they can use the trademark. Where as produced in Britain anyone can use that as long its been manufactured within in Britain.

SilverSurfer . May be showing my age here, but I vaguely remember M & S only had goods made in Britain ( if I remember correctly). My Mum always felt this ensured quality. I now feel that this is not the case IMHO).

BlueEyesX That's what they will be hoping for with the "Made in Britain" trademark that people only trust if it says Made in Britain.

This is quite straightforward, but you want one that's confusing? "Made in EU"

That tells me it was made somewhere in Europe-EU, so I just look for the city/country on its rear label. The EU trying to imitate China, smh.

You can have 'Made in Germany' and pretty much the complete product is made in Asia, the product may simply have gone through Germany and been reboxed or had a manual added. It's the last significant process rule.

For a lot of people 'Made in Germany' is a mark of quality even though nowadays they tend to be the least reliable cars on the market with both frequent repairs needed and higher repair costs but still for some 'Made in Germany' is perceived as quality so they simply have Asian products passing through Germany to increase the profit margin.

Now that the Brexit agreement means German companies have to pay tariffs on these Asian goods when sold into the UK even though they are labelled 'Made in Germany' so many German companies don't even sell to the UK anymore because of these tariffs. I was looking at Taylor Wheels only a couple of days ago. They no longer ship to the UK as the wheels are pretty much made in Asia and would have to pay additional tariffs which would hit their profits so its easier to sell them within the EU zone especially as there is a shortage of bike parts.

I only mention this as what constitutes 'Made in Britain' and 'Produced in Britain' can mean different things. I think Cello tv's are pretty much all Chinese components but with final assembly in the UK. Really the final assembly isn't that significant, it's just a basic factory ******** the parts together.

BonzoBanana Thanks for the info. I would really like to be able to purchase an ENTIRELY British made/produced whatever product and not just assembled here. I know the chances of this are very small as everything appears to be imported from Asia via another country.

BlueEyesX I can't imagine anything electronic being entirely manufactured here but I don't think this is typical as many industries could manufacture entirely but at what price.