Hello Ann, I just tried to like a comment but it popped up a message saying I had already voted, but I hadn't, but the word 'like' had not gone blue. Methinks there is a gremlins in the works.

That sounds as if someone is censoring what comments can be liked or not, I hope that is not the case. Ann1984

Ann1984 I actually feel quite bad that this has happened and I often think that comments are read differently to the way the poster intends or says it in their own mind. I try very hard not to offend anyone but with age comes a certain way of telling things as they are seen. I know we live in a pc age but it is very wearing to have to guard every word in case it offends someone. I find it strange as in my personal life I have not had a single cross word with anyone for about 40 years!

lilyflower I always thought the POST referred to meant the posting of a deal etc. (for which people receive points). Not the COMMENT posts on a chat topic. Confusing innit

(I'm not always right - that's just what I thought)

Lynibis "in my personal life I have not had a single cross word with anyone for about 40 years!" that's the attitude Lyn - just give them a good slap!

Ha ha davidstockport I don't have a violent bone in my body! My sons say I am soft as a brush.

davidstockport Yep 'tis confusing. I thought it was 'like' anywhere, just as comments are.

Lynibis I am not violent either - I haven't struck anyone in my adult life. . . YET!

Whoever the mods are, I've just posted a new topic and its has gone into moderation. I haven't time to see how to appeal this or get it looked at. It's only about my new garden.

I have noticed this the last 2 days aswell. If i try to like certain comments i get the error ‘something went wrong’. Ive also had a few +20 points for a popular comment and then another notification saying -20 points because your comment lost likes

KirsteyJames I had a spate of -20 points for "comment lost likes" early in the morning a few days ago, all but one, within a few minutes of each other naturally not all on the same topic or comment. It was either 1: that I'd said something to upset someone (as if!)2: Someone tried to like my comments for a second time (that's more probable 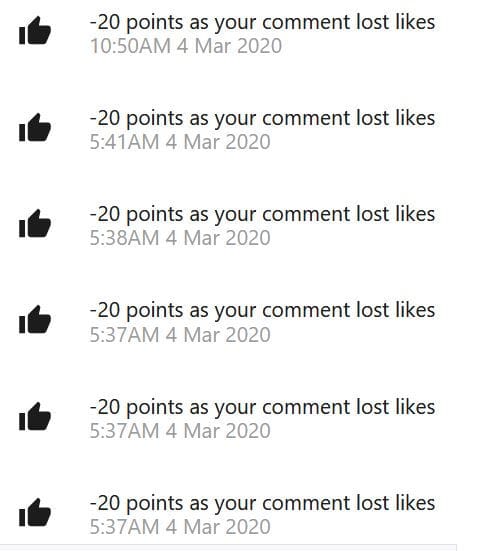 Furthermore WHY are the notifications Thumbs UPPED?

This has happened to me a lot and it really messes up the totalling on your points. I have often had 20 points for a comment but the points have gone down instead of up! When I look at the comment it only has one of two likes so folk who have liked must have thought better of it and took back their like lol. I don't care either way but wish the points menu would show what is going on.

Lynibis I've occasionally noticed that a third like (and presumably some first and seconds too) are taken back instantly, that is probably where someone has clicked on LIKE instead of REPLY and realised their error, I also think, as already stated, that many "taken back likes" are someone accidentally trying to like a comment for a second time. (which cancels out the first one). In which case they must like you otherwise they wouldn't have clicked the first time,

If you could also let me know if you’re using the app or the website that would be great.

Kelsey i have just sent you an email with a screen recording video of the issue happening to me on the app. It has happened on the website aswell.

KirsteyJames I hope everything will be ok soon

davidstockport Kelsey for me its happening on comments that already have 2 likes. I knoe its comments that i havent liked before. When i click on the like button its says ‘something went wrong’ and i see the number if likes change from 2 to 3 but then go back to 2 again and showing i liked the post, so it loses a like somewhere. I think thats where to -20 error is coming. Im not bothered about the points either, i thought someone didnt like me though

As I am sure everyone knows the word Like is grey until you click it, at which stage it turns blue. This is handy as you can see that you have already liked the post. However, several times yesterday I clicked a grey Like and got a flash saying I had already voted. Can't remember which ones but always on website as I don't use the app.

Thanks everyone for the reports and KirsteyJames for the extra detail and video!

The bug should be fixed now

A few existing comments may be a bit confused about whether or not you've already liked them but should be sorted for the new ones.