What Do You Notice in films/TV That Spoil the Illusion

I am talking about the things that they do on soaps etc they probably wouldn't in real life. E.g. no one seems to watch tv unless it is pertinent to the story, characters are constantly popping into the 'caff' for a cuppa even when they live just a door or two away.

I no longer watch the soaps but I used to mutter 'doesn't anyone have a washing machine' in Albert Square as they were always in Dot's launderette.

Then there are the mistakes like the famous scene in an

old film of a Roman soldier seen to be wearing a wrist watch!

What have you noticed or find to be unreal?

Lynibis
a month ago
What do you think of this?

I tend to notice more when people get up and walk away from accidents/ scenarios when they really shouldn't.

I watched a show called Prodigal Son recently, the protagonist gone blown through a 2nd story window by a bomb, and landed on top of a car.

At the very minimum he would have suffered multiple broken bones and severe burns, and more likely it would have killed him, and yet he just got up and dusted himself off.

I stopped watching it after that.

You are so right. Nearly all fight scenes show people being punched full in the face, having chairs broken over heads, a heavy implement slammed into them and yet it's like swatting flies when in reality any one of those things would floor them.

I imagine lots of young people would think they can do and take the same and get a nasty shock when someone dies, as in the knife crime going on.

Lynibis Precisely, such unrealistic consequences of some horrific actions that people must feel that they are invincible. Until they find out they are not.

as yer do lol.

Everything lost the 'magic' after watching films being made. One of the funniest was The Spaceman and King Arthur, the Director thought the spaceman was doing a very impressive dance while burning at the stake, not realising he actually was on fire. Fortunately he was not hurt.

Yes, I remember your pics with you as an extra on Robin Hood (?) so I am sure you have seen a few things! The Roman with a watch thing is amazing when you consider the lengths they go to for reality in some things. I remember reading that in Last of the Mohicans they had special nails made for the fort so they were authentic to the time.....I mean, who on earth would notice the nails unless the camera did a close up on one.

Lynibis They made all sorts of 'authentic' things and took lots of photos of us extras so that when they moved to next location/studio the next load of extras looked like us! The best bits were jumping off the battlements into the moat/river and in fact it was a big blue blow up cushion.

lilyflower The main purpose of the photos was that if the extra was in the same scene on another day of filming it could be ascertained exactly how they were previously dressed (and hairstyle etc.) for continuity purposes.

In productions where extras had to be provided with clothing, most costumes would be hired in batches, and extras who would fit the costumes hired usually got the job.

I also wonder how many bedrooms there are meant to be in the terraced houses in Coronation Street - the Barlows, for example? Recently, Ken, Peter, Tracey and Steve and Amy were all meant to be living there!

Do you remember how, many years ago, a massive function room would suddenly appear in The Rovers for pantomimes etc?

Also how several new windows suddenly appeared, in the gable wall of the Rovers, when they relocated.

True story: In the early years a viewer wrote to the producers pointing out that the gents toilet door in the Rovers would lead directly into Albert Tatlock's back room. They wrote back saying "We know... that's why he's so grumpy!"

davidstockport got to love a bit of artistic licence! I still watch Coronation Street and Emmerdale though, habit, I think.

gerrykelly25 When they have characters who were born before they were conceived - that is carrying artistic licence a bit far,

I noticed some years ago Johnny Connor, when admitting to being the father of Carla Connor, whose date of birth (character not actress) is 3rd January 1975, saying she was conceived in the back of his Vauxhall Cavalier, the first Vauxhall Cavalier was unveiled at the motor show later in 1975.

I didn't say anything about it at the time, as I thought it might have been part of a plot when it was shown he wasn't her father.

I did however take a shot of what had been said: 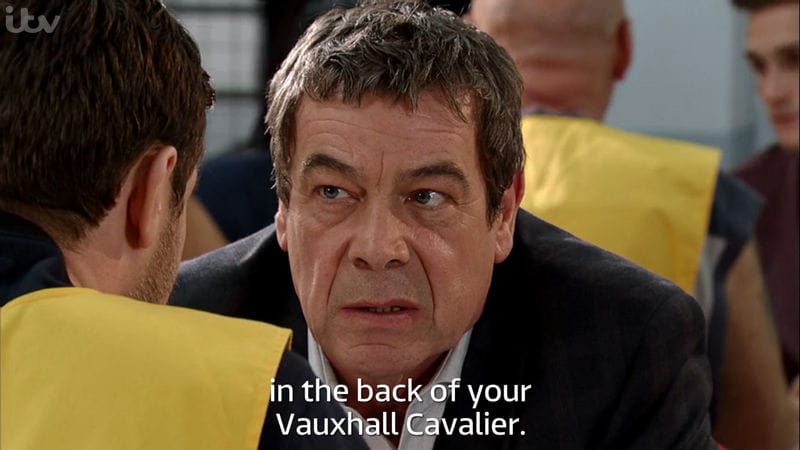 davidstockport you are sharp as a razor!

sophiereddy
LD Team
a month ago

When a character leaves their house without locking their door

Or do not appear to take keys or a bag that might contain them. I also hate it when a character walks in the front door with camera following and does not close it behind them, I find myself talking out loud and saying 'shut that door' !

A thing I've noticed on Coronation Street - is that in many episodes that follow on from a previous episode, for some storylines it is the following day but on other storylines it is over a week later (and the week later coming before the next day). A recent example of this was the black footballer who was going to have a knee operation "NEXT WEEK" was recovering from the operation the "NEXT DAY".

Good spot, and I wonder why I get confused in time travel films! I keep meaning to watch The Time Travellers Wife and Looper again to see if I can grasp it better.

Lynibis You might not notice but they try not to use "dates" but it has to be assumed that Christmas day (filmed months earlier) is supposedly on 25th December. They should avoid shots of the moon when filming (but don't). numerous times I've noticed the moon is in the wrong phase.

Any clocks that are in shot are deliberately stopped, but sometimes the clock isn't nudged forward in long scenes. It has happened (where the earlier part of a scene has been reshot that it appears the clock hands have turned anti-clockwise).

davidstockport you are very observant. It's probably just as well I did not fulfil my childhood ambition when someone explained to me what it was after seeing it in the credits........continuity girl!

Lynibis Most directors would appreciate something that was "out of order" being pointed out to them. But I do recall one, not very well liked director's face, when told after filming had ended that the commonwealth flags that had adorned the set for the full duration of the filming, should not have included the Maple Leaf flag of Canada, The film was set in Victorian times. The maple leaf flag wasn't adopted as the flag of Canada until 1965.

I bet that caused a bit of a problem in the editing room.

Lynibis It was probably the one hiring the props who just ordered a batch of commonwealth flags, but someone should have noticed it. It shouldn't be up to extras to check things out. That director was the type who'd shoot the messenger". Most directors would be grateful.

Coronation Street have been filming but with social distancing in place it’s not believable. I still watch it though.

On Coronation Street, the only police officer in the whole of Manchester seems to be Craig.

I don't recollect anyone having a Chinese or Indian takeaway delivered either. Maybe they should show an occasional DPD or Amazon van making a delivery, or a supermarket van delivering an online grocery order lol.

I do like Martin Shaw but have not watched many of those, they must make it on the cheap!

My husband who is a Londoner gets really annoyed about London locations in films, Tower of London isn't near Trafalgar Square etc.

Fight scenes, if you get hit over the head with an iron bar you don't get up as nothing has happened and win the fight

One you might have noticed Lyn (I saw one the other night) is films set in Tudor times where the queen is referred to as "Queen Elizabeth the first "Good Queen Bess" didn't become Queen Elizabeth THE FIRST - until 1952.

Just as Queen Victoria won't be known as "Queen Victoria the first" unless some other future queen decides to use the name Victoria,

Yes you are quite right. I get a bit annoyed when they show couples kissing quite passionately in public prior to about 100 years ago as they just did not do that in the street. Unless of course it was a lady of the street touting for trade!

Also, I could be wrong on this but I understood Henry VIII to be the first monarch referred to as Your Majesty, but it is often used to address monarchs prior to him.

Characters in films & TV shows that have average jobs, but still manage to live in large properties and/or expensive areas. For example, Carrie Bradshaw (Sex and the City) and Penny Hofstadter (Big Bang Theory) often appear on lists about characters living beyond their means. 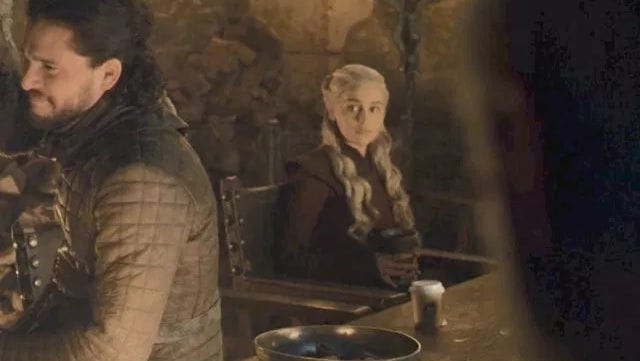 Oh, well remembered, that was all over the media when it happened and caused a lot of laughter. Apparently yellow lines weren’t introduced until the 1950‘s, but made an appearance in Bridgerton!

If places like Eastenders or Coronation street existed then no one would live there with the amount of deaths, murders, accidents etc

Tonight we were watching Only Fools & Horses, the episode where they are taken hostage. I have seen it loads of times. But tonight my husband pointed out that the "Shadow" was wearing different trainers 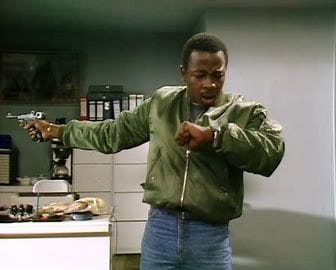