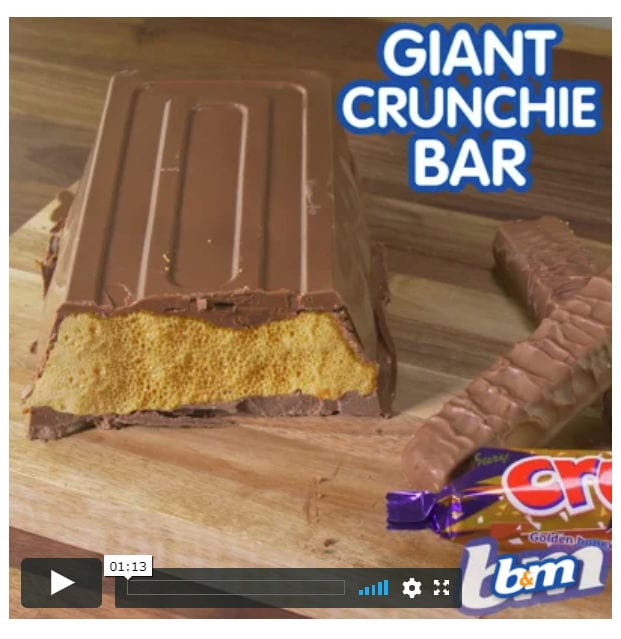 Do you love Crunchie bars? If you do then this is the perfect chocolatey treat for you! Follow the steps in the video above so you too can enjoy a Giant Crunchie.

Melt your chocolate over boiling water and line the silicone loaf tray with it. Once the edges are lined chill until set.

Add golden syrup and sugar to a pan and heat on medium for 3 minutes.

Take the mixture off the heat and stir in the bicarbonate soda. Quickly pour this into the chocolate silicone tray and chill until set.

Melt some more chocolate and seal the giant bar with it by spreading all over. Chill until set.

Once it has set, cut it open and enjoy!

JoTarpley
29 days ago
What do you think of this?

JoTarpley you should check out www.pimpthatsnack.com for loads of monster sized snack creations.

I'll check out your link, thanks x

I have all of those ingredients in the house! Not sure I could wait for 3 hours for it to cook! I would want to eat it straight away! Love honeycomb!

How about doing a time consuming chore that you have been putting off MrsCraig , you could have that as a treat at the end, you might not notice how long you've had to wait then

JoTarpley I don't have any time consuming chores that I need to do though! I suppose I could tidy the whole house, that would take me a while. Or I could just ask my husband to make it for me

OMG! I so want that right now

Acknowledging that some of us are pigs who could polish that off on its own.

Ooh thank you. I would be happy eating the honeycomb without the chocolate. I might try to make some next week. Is bicarbonate of soda just baking powder?

What is bicarbonate of soda?

Sodium bicarbonate is the most necessary out of the baking substance family.

The vital white powder is also known as bicarbonate of soda and is a mixture of sodium and hydrogen carbonate.

Its main use is for baking and it is alkaline with a bitter taste.

According to BBC Good Food, when it is mixed with acid (such as milk) it creates carbon dioxide - which causes the mixture to expand before it’s replaced with air.

It is most commonly used for baking cakes or soda bread.

What is baking powder used for?

Baking powder is made up of numerous elements – one of these is sodium bicarbonate, above.

Into the baking powder mix is an acid, cream of tartar and filler like cornflour to absorb any moisture.

Because baking powder already has an acid with it, it’s pretty much a pre-packaged version of sodium bicarbonate – so generally you need only add water to it for the same reaction.

It is used for similar foods as sodium bicarbonate.

When do you use baking soda?

This is an easy one – baking soda is just another name for sodium bicarbonate.

The name makes it very obvious what it's used for, so all bakers should have it in their cupboard.

So hands up who's inspired to get creative in the kitchen after learning the differences?