Could This Pandemic Have Extended Your Life?

Covid 19 has caused us to take many precautions against the risk of infection, masks etc. It is a virus that kills a significant number of people and we have had to change our lives because of it.

However our actions have also prevented many other viruses from replicating and effecting our bodies. Such viruses may not have any symptoms, they enter the body with their packet of data which ends up rewriting the code of our cells, degrading it basically but no other symptoms before our immune system destroys them. Such viruses could be a part of the reason we age and as our cells replicate they are not as good as the cells before them. It's all part of the degrading of cells over time that is so obviously shown in the skin but effects all parts of the body.

Since the pandemic has started a huge number of people have had less social interaction, less sexual partners and production of food has reached higher hygiene levels to hopefully reduce the levels of viruses that could be in meat etc that could effect us.

The viral load for many has massively reduced and this could be a significant factor in our ageing and health. So there could be a fringe benefit to this pandemic. Japan has had a culture of wearing face masks for many years and enjoys the highest life expectancy of any country.

It's food for thought anyway.

BonzoBanana
3 weeks ago
What do you think of this?

Pandemic has stolen a valuable time of our life,we are not getting younger.It raised a lot of mental health problems ,suicide and domestic violence,lots of people couldn't attend doctors in time, surgeries was canceled .I don't think its any way extended our life's

Don't for a minute think I'm ignoring those and I have suffered from covid myself but for many who have isolated and not been infected they would have had less viruses than normal as is the case with the huge reduction in people getting flu. Obviously its a horrible situation I was just trying to point out a small silver lining to a terrible pandemic.

We are organic machines running organic code, our DNA and that code is vulnerable to viruses. About 10% of our DNA is made up of virus data, its a corrupting force. We only notice it when it produces symptoms but not all virus data leads to symptoms. Some viruses may even by chance have had a positive effect actually creating a improvement in our DNA by chance.

I just find it interesting how close a computer virus is to an actual organic virus.

I suppose the main difference is a computer program is normally fairly compact and structured where as DNA is a complete mess with perhaps only 1 to 2% of it being useful code most of it is just junk we don't need.

Not just about viruses thou, many others have has their lives shortened due to diseases such's as cancer being missed. urgent operations being cancelled etc.

That is a very big problem which is really coming to the fore now as people who have either put off going to their GP, or more likely just not been able to get face to face GP appointments are now being referred into hospitals and joining every growing waiting lists.

that's a very interesting idea. you could have a point.

On the other hand, if children are not exposed to viruses and bacteria because of all these hygiene measures, will they be more susceptible in the future?

It seems that in New Zealand they are finding just this - a rise in childhood respiratory diseases for this very reason.

It's a difficult balance, learning to fight viruses is important but viruses can also corrupt your DNA until you have beaten them. Bacteria is definitely good to get exposed to at a reduced level from an early age. I think going back to viruses 'viral load' is important. If your body gets a tiny amount of a virus it can learn to deal with it without too much damage. Unfortunately at the beginning of the pandemic many medical staff were exposed to higher viral loads and their system had no time to cope and it was over-run and many ended up dying. Vaccines are brilliant at giving the body the information to fight a virus without exposing it to the damage of it. So your body can learn to destroy a virus with much reduced damage to your body and organs etc. Vaccines would definitely be a better option for children as the body is still growing so the DNA getting damaged while in that state is more risky.

I hadn't thought of that but very true

COVID has led to increased sedentary behavior, which is detrimental to physical and mental health. There has been a rise in obesity levels during the pandemic. Being obese increases the risk of developing health issues and also puts people at greater risk if they are infected with COVID.

The evidence is clear that obesity is a risk factor for severe covid-19 disease and death.

Yes life expectancy is definitely reduced, the fact probably close to 150,000 have died prematurely would effect those statistics significantly.

I've not seen any statistics that obesity has increased during covid 19 above the national trend but wouldn't be surprised if it had. I have certainly seen reports that covid 19 has highlighted the UK's high obesity levels and greater risk to covid. I guess it also depends on your job. Many people work in offices with very little physical activity but others do physical jobs and how each responds if forced to stay at home would either increase or reduce their physical activity.

As an obese person myself who was hit with covid and just getting over long covid I certainly know the greater health risks of obesity sadly.

This is the increase in obesity by year graph from the government. Sadly even before the pandemic obesity was increasing although I didn't realise it was increasing at a much greater rate in woman than men as shown here but it doesn't surprise me as the gap between what age men and women die has been reducing so perhaps the increasing level of obesity in women would explain that. Annoyingly that graph doesn't yet show 2020/2021 figures. 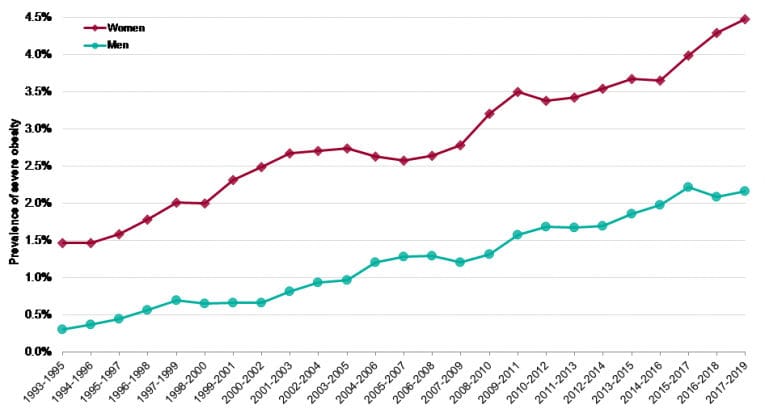 Its ruined mine! Lost my job my business and my mind, now live on food parcels and donations. We live in 1 room ,I definitely don't want to live longer would rather go now !

Don't think I'm in anyway negating the horrible effects to people's lives in this pandemic and sincerely hope your situation improves rapidly. This was just a discussion about the fringe benefits of reducing the level of viruses entering the body and how for some it could be beneficial overall. How wearing face masks as shown in Japan can massively reduce the level of virus transmission for all viral diseases etc. I think a significant number of UK people now have a greater understanding about viruses and how to prevent their transmission and this knowledge will not leave them in the future, hopefully we will have better years ahead and much less successful years for viruses.

My childhood was spent in the great outdoors,if anything it boosted my immune system ...something children have missed out on these past 18 months.A lot of people suffered greatly with the stress&uncertainty of it all,we still don't know the long term effects of it all/health wise,even economically..maybe it is down to the individual person and how they responded to it all,health wise I am sure people made better decisions,on the other hand there was an influx of fast food deliveries,being promoted everywhere,hard to escape.

..We kinda just tried our best every day,just took on a few new hobbies..running/growing our own veggies....very rewarding

I agree that the air quality definitely improved over the past year or so, due to less traffic, flights etc. I have also noticed an increase in birds and wildlife as their habitats haven’t been disturbed. This may have given the planet time to heal slightly from all the damage we inflict.

I think that we will find a big increase in influenza this year once people stop wearing masks and the hospitals will struggle to deal with the backlog of treatments which have been postponed.

Everyone’s experience of the past year will be different. For some, it has been devastating, while it has given others the chance to reprioritise their life.

I don't get the lack of face mask enforcement. I agree we need to open up but just don't get not having face masks in shops. Many vulnerable people won't be able to go out to shop because people aren't wearing face masks plus wearing face masks may lower the viral load which means if someone does get infected the viral load is less so it could be much less damaging as it allows the body more time to fight infection. Face masks just make sense from now on. Is it such a big deal to wear a face mask, I don't feel it infringes my freedom when I go in a shop.

The exact opposite, prior to the pandemic I had major back surgery and I was slowly recovering. Without physio or any follow up my mobility and mental health have declined.

I can see your point but also Nataly makes a great opposing point. I feel a lot of it comes down to personal hygiene practices. For example the amount of people who use the toilet and never wash their hands no wonder germs spread so fast.