Do members forget ? Are they trying to make a deal "look" cheaper than it really is ? Deal posting guidelines state that " any P&P should be shown in the deal post" .

OK no need in "in store prices " or stores that have a physical presence ie Supermarkets , hardware stores , Halfords and such .

Are members in such a rush to post a deal that they "forget " or for many is it just "click , paste, 100 points , done " ? Not even knowing what they are actually posting

I would be quite happy to help the Latest Deals staff by flagging deals (on "report deal" that make no mention of P&P) . Should that option be made available ?

) but this is rarely mentioned .

Particularly in these days of online shopping should it not be compulsory to show P&P on any on line only deal ? I do that with all my deals - shouldn't we all ? So when scrolling through £5 means £5 - not £8.99 ?

Golfforall
1 month ago
What do you think of this?

Well Mr Angry, there is nothing to stop you reporting, I am sure you could use the missing info option or other. Personally if I was interested in a deal I would check if P&P applied and decide if it was still worth it.

However, yes, if it is meant to be shown then posters should make the effort to do so.

Just trying to improve the site for all . Can't see why it should not be obligatory to include the P&P (where applicable ) in the deal post . Most other deals sites require the total price to be posted . Takes about 10 seconds extra and posters are getting 100 points for their "deal ?" after all .

Tom 's tips do help for many major retailers but are right at the bottom of the post , how many members actually look at the description or comments when harvesting their 5 points for "liking" ?

Maybe it is members in such a hurry to harvest their 100 points (often 3 "non deals" posted within a minute !) that they "forget" or can't be bothered to add the P&P ?

Or perhaps its because when the P&P is added it isn't such a great deal so members omit it (particularly on low priced items ).

Surely it would not be too onerous on the poster to be required to include P&P where applicable ? If they can post 3 "deals" within a minute then an added 30 secs to include P&P is not too much to ask ?

I would agree. I've noticed others feel the same when reading comments on deals that p&p not included

How about asking LD to expand the default Delivery Options for all the major retailers at the foot of the deal pages, so that it's more obvious?

It would save everyone having to type it in over and over again.

So for example if someone posts a Boots.com Deal, it would look like this: 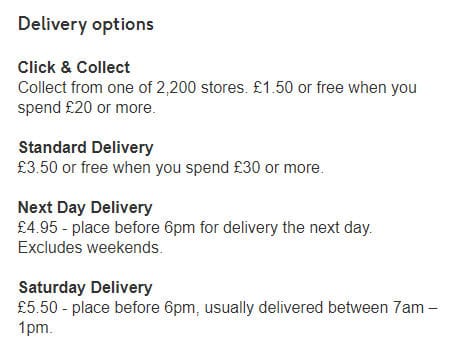 It won't work with Amazon 'Other Sellers' though!

Hello, thanks for your Chat post. Heads-up that for the majority of major retailers, within the "Tom's Top Tips" box which is at the bottom of the description, the standard delivery costs are included by default on every post.

Here's an example for AllBeauty -

We do encourage members to share the P&P cost within the description of the post if it's known, and if you spot that it's missing, it's great if you can add it in the comments.

You're wrong from the start, it's actually your Pet Hate No 473.

I kind of agree with you. There's nothing more annoying that clicking on a deal and then finding that there's a £4-5+ delivery charge on top. It makes the deal redundant because of the overall cost.

But would you want every Amazon Prime deal under £20 to include the 'Non-Prime' P&P, for example?

I'm unsure about this one

TBH it's the "Click and paste 3 Amazon non deals in a minute , add 3 vouchers collect 450 points each and every day " members (we all know who they are

!) who should perhaps reflect on how they are daily abusing the site ?

Maybe the 10 secs spent adding the P&P might give them time to reflect on the "non deal" they have posted ?