I have been getting more and more of these kind of messages, but in this instance, it can’t be right as the flagged duplicates show a link that take me to the same deal that I’d posted - so they’re not duplicates

Please can you check, as a lot of my points have disappeared as a result of this 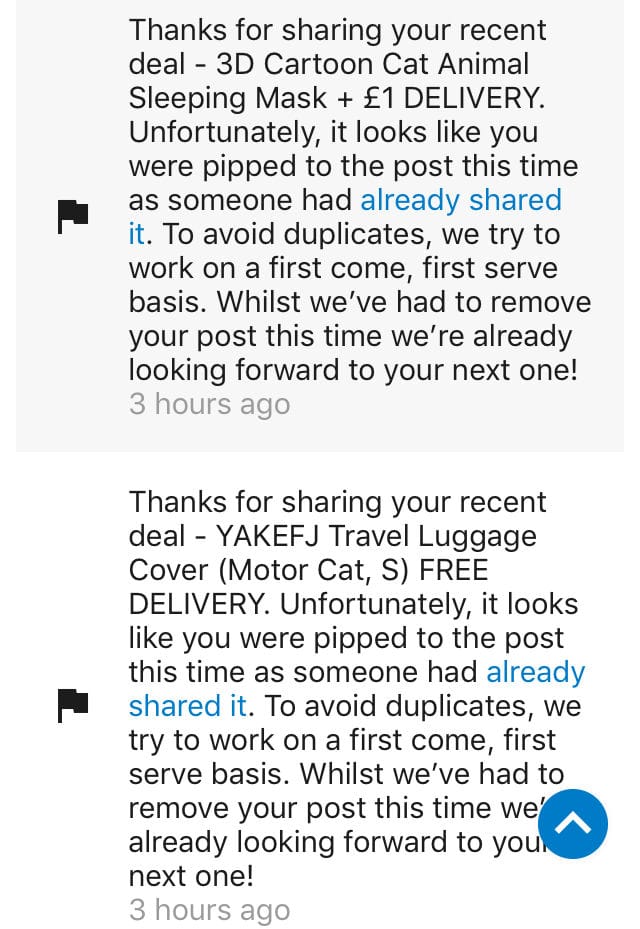 Update - I think I know what’s happened. As they're amazon deals, though they are separate deals, the seller on amazon is the same, so the link is similar, and so it perhaps shows up as the same deal, but they’re different items being sold (just noticed as I looked at the description of the first one, as it was for the owl mask, not the cat mask). But they are indeed separate deals and not duplicates

hspexy
2 years ago
What do you think of this?

If the items appear in the same listing and is just a seperate "choice" I think that's considered as one "item" as it's the same item but just a different "colour/style".

Perhaps that’s what it is - but can’t get back to the original post to verify. But then again, that would be strange because you’d think the robot would pick it up as a duplicate at the initial posting stage? Instead it’s just been picked up and removed 2 days later...so I’m thinking this is due to someone having reported it and a moderator removing it

I've put your post back live on the site. I think it was probably a mistake as, at first glance, the two deals look very similar. As they're different Amazon listings and prices I think separate posts are probably okay in this instance

Cheers Kelsey! The problem was I couldn’t even refer back to the post to check, and once I saw tgat +£1 delivery, I was certain it’s 2 different deals. So in this instance, did a moderator take the deal down?

Kelsey please can you also check the other one that was removed? The link goes to here https://www.latestdeals.co.uk/deals/yekeyi-washable-travel-luggage-cover-glasses-dog-size-m-free-delivery-amazon but the deal is different, different items, different sellers (again, can’t verify for sure if the post has been removed)

I've put that one back live too. I think a similar thing has happened.

I'd generally say if you're sharing two very similar products in quick succession to post them as one listing (perhaps add the image/link for the other in the description). It's a bit of a grey area really!

But - to answer your question above, this would have likely occurred due to the post being reported as a duplicate by a member rather than any automated system.

Kelsey thanks for sorting it and clarifying- I thought as much. Thanks again