Sympathy Cards for the Lost of a Pet Yes or No

My friend has recently lost her cat, who she has had for 12 years. She is obviously upset and due to being in Tier 3 I can't go to see her. Whilst I am not a pet owner I recognise that it's like losing a friend. So, I am thinking of sending her a sympathy card.

beccatavender
2 months ago
What do you think of this?

It’s entirely up to you, for me I don’t get succoured into this nonsense, we had one of our cats put down a while ago at yet again an extortionate vet cost, but it was very touching to see where some of my money went when I received a sympathy card from them that I paid for! Me I’d sooner they reduce their costs rather than this unnecessary waste.

I'm in two minds, as I am not a pet owner but she is really upset.

beccatavender she’ll get over it, times a great healer.

As a dog / pet owner I can tell you that losing a pet can be incredibly hard. Iv taken the loss of a pet harder than I have some people. It's not always something people just get over. I would be more inclined to send a small bunch of flowers with a 'thinking of you' card rather than a sympathy card.

Good idea, I think I will do that

I've had lots of pets over the years, and it's a very sad time when one of them passes away, especially if they've been with you for a long time. I would send the sympathy card, I think it's a nice way to show you're thinking of them during a difficult time.

Its up to you but I can understand the pain she is in. I have 3 cats and one goes it will be devastating. Thinking of you card might be a good shout.

100% Yes, They are part of the family and losing a pet brings such heartache that if the cats passing has brought sorrow then it will be comforting to know people are thinking of them at there time of loss

I’d say a thinking of you card. Nice gesture. And Maybe if you could see a pic of them both on social media and get a photo into a gift via snap Fish or something ?

I've buried , on average ( in my back yard btw ) one dog every 10 years . You never get used to it and I've cried every time , I think some one offering sympathy however it comes goes a long way , that's 5 furry friends too!

I think it would be a lovely gesture. We have a dog and she is very much our first baby! I will be inconsolable when I have to say goodbye to her. You could maybe make a small donation to a local cat charity in her cats honour?

That's a lovely thing to do and very thoughtful. Losing a pet is terrible

It depends. I don’t expect these kind of cards myself, so I’m unlikely to give them. But it’s always a nice gesture

I think everyone’s grief is personal to them and the death of a pet can have a huge impact on some. As Glitterandgold said, perhaps a ‘thinking of you’ card would be appropriate?

Definitely yes, if I lost my fur baby, it would feel like I lost a big part of me. He is like my baby

In the end I sent her a little gift hamper https://www.123-flowers.co.uk/christmas-flowers/roses-and-gin?kk=a4c6327-174eef13377-55e1f.She is a keen gardner so will plant the roses to remember her cat, plus she likes gin. She sent me a thank you email and she was very pleased. I think even though you can't see people it's nice to show you are thinking of them

For close friends and family i think it would be a lovely gesture. They will feel so much better knowing you understand and are there for them

I think it would be lovely to send a card as your friend has lost her companion and it will help her grieve. This will show what a true friend you are

I remember seeing flyers and the sorts for missing pets, I honestly doubt most were returned to their owners whether the pets went by themselves or not.

But yeah, it helps since people who do this obviously miss them like they were their kids.

Yes. I think its a thoughtful way to show youre thinking of them in a difficult time. When my mum lost her dog I know it meant a lot receiving some cards of sympathy!

My mother has just lost her cat Arnie which she had to have put down because of failing health and discomfort, the cat was somewhere around 16-18 years old so had a very good innings for a cat. She did have a cat Casper that lasted about 26 years though. Anyway she felt very guilty about putting Arnie down, its very difficult when you have to make a decision to end the life of a cat but she had exhausted the possibility of managing his health problems he was just very old. Also he was more of a pedigree cat which don't typically last as long I believe.

Arnie was a lovely character although very vocal in his old age. I shall certainly miss him too. I have two cats myself Conker and Josie and would hate to lose either.

I'm a big softie when it comes to cats, I get very attached to them and love to be around cats and it's always been horrible when you lose a cat.

If you feel a card will help someone its definitely the right thing to do. I would never make light of someone losing a cat, I think because pets often seem to fill the same emotions as a child for some people it is like the loss of a child emotionally.

Lets face it some people get emotionally connected to objects like cars and get deeply upset if damaged. It's not about the car or pet so much its about the human emotions.

This is Arnie below. He had a good long life compared to most cats but still horrible for him to go. 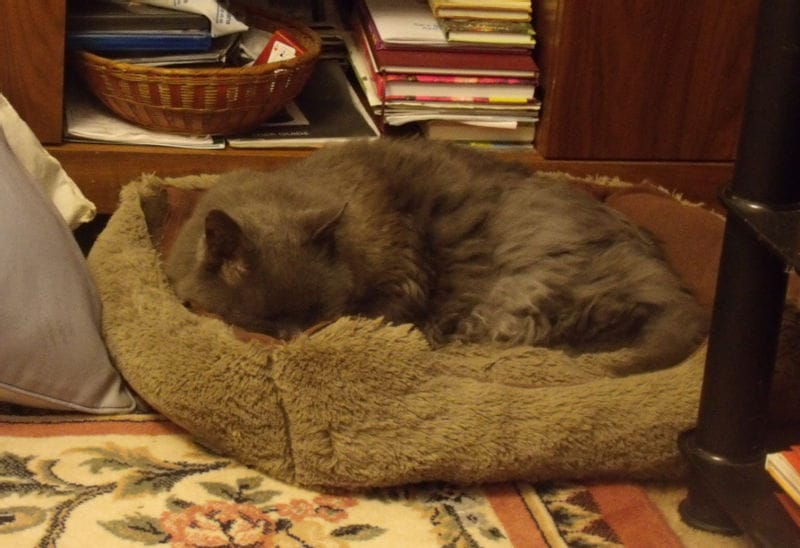