If even the experts cannot tell if their paintings are genuine , what hope have we got ?

I am just glad i didnt spend my savings on it

telmel
2 weeks ago
What do you think of this?

Estimated that about 20% of paintings in galleries are fake.I fancy that some of the best art forgers are really rather good T because they have to adopt more than one style and get em past the experts.Michelangelo himself lol

At the age of 20 in 1496, Michelangelo sculpted a marble statue of a sleeping Cupid and tried to pass it off as an antique by burying the statue in acidic earth, which made it look older than it actually was. He wanted to give the impression that it was a found art object to get a higher price for the work.

The statue sold to a dealer who in turn sold it to Cardinal Riario of San Giorgio. When the Cardinal discovered it was a fraud, he demanded his money back from the dealer. The Cardinal, however, saw that Michelangelo had great talent and the young sculptor got to keep his profits from the sale. 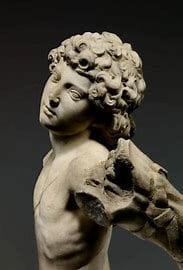 And then there's the somewhat audacious Banksy.

Banksy had his work shown in the world's greatest museums – the Louvre, the Met and MoMA to name just a few. The only problem is that these museums didn't invite him to have his art displayed! Well, at least not initially.

In March 2005, this “guerrilla artist” hit four of New York's biggest museums—the Museum of Modern Art, the Metropolitan Museum of Art, the American Museum of Natural History, and the Brooklyn Museum and mounted new pieces at each without the museums' permission! He didn't just stop in New York, he also mounted his own pieces at the Louvre, Gallery 49 in Britain and even Disneyland, where he snuck in an inflatable doll dressed like a Guantanamo Bay detainee on the grounds of the Big Thunder Mountain Railroad ride.

You could argue that Banksy used instillation art as form of forgery, but one thing is for sure, the man knows how to make an impression – much to the chagrin of the elephant the artist painted for his “Barely Legal” show in Los Angeles! 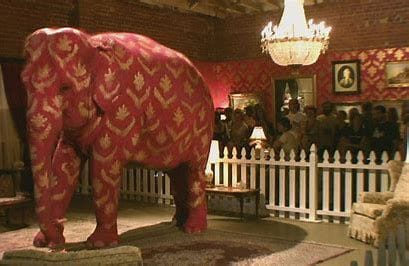 The faces on the audience were classic

telmel First time seeing that T. Thx.I don't normally do street are but had a wander up around Portobello and Westbourne Grove the other day. There's some really good stuff there.

MelissaLee1963 I only know banksy M , but you can always count on him to surprise you