I did GCSE typing and have always used a two space rule when typing documents, sending emails etc. Before anyone pulls me up now, on a phone it's different and I would only use one space but typing on a keyboard at work I'd automatically hit two spaces. I was having this debate with my boss who automatically would correct my work to one space. I don't think there was a particular right or wrong way.

And now it's even in the Daily Mail https://www.dailymail.co.uk/sciencetech/article-8264875/Microsoft-Word-mark-two-spaces-sentences-error.html#article-8264875

It's going to take me a while to get out of this habit.

rararachel
a year ago
What do you think of this?

I'll not get out of the habit. It took me long enough to re-learn that I was no longer required to put a comma and full stop on an address. (I'd been typing for 25 years when I decided to get further qualifications). No two spaces stays, as you can see

I'm not sure but think there is some misunderstanding. I thought double spacing after the full stop meant the full stop and then two spaces. (as I just did twice). The two full stops in your example only appear to have one space after them. I prefer the one space which should always apply to commas.

I think the changes were made (to single space) when typewriters, where the full stop isn't as close to the sentence it ended, became almost obsolete.

I do remember when many wouldn't even put any space after commas and full stops.

EDIT: Not sure if the double spacing actually gets removed here, to experiment - I'll write almost the same thing twice the first with single spacing after the full stop - and the second with double spacing.

This. Is. With. Single. Spacing.

This. Is. With. Double. Spacing.

Further EDIT - Yes (as suspected) the double spacing does get edited out, the only slight difference in length is because "sing" is narrower than "doub".

This shows how it looked before it was submitted. It clearly shows the double spacing is edited out.

davidstockport mine was definitely double when I set it out.

lilyflower I know.... see my recent edit - the double spacing is edited out after submission. I'd guessed it when I saw my own reply after it had been submitted.

I think we got our answer about this when you said it was in the Daily Fail although they're not approving or disapproving it I suppose. Much like the well known kitchen roll, one space is plenty.

They're reporting on it being marked as an error in Word. Double spaces are evil though, so I'm surprised the Daily Heil aren't in favour of them.

It's going to take me a while to get out of this habit.

In that case, you must stay within the nunnery walls.

Although we will allow you out for your daily cycle. Don't forget your social distancing! 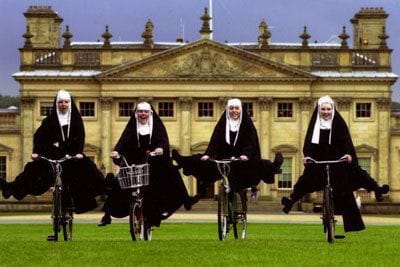 rararachel Well it looks as if you'll have no problem getting out of the habit of double spacing when you're on this forum, as I've just discovered it makes no difference, if you use double spacing it will be altered to single spacing after your comment or reply is submitted. lilyflower

Sadly, I have to correct people on this all the time at work. Not in a picky way - it's part of my job to make sure content is correct. Double spaces are evil, but there's much bigger evils out there too...

Things are constantly changing. I recall it was customary (and correct) to use a full stop after MR (as an abbreviation of Mister) but notice from all official mail, that absolutely no full stops or commas are now used in either name or address. I also notice some names and addresses are in all uppercase letters, I suppose that helps the mailman.

davidstockport yep. But unfortunately people don't like change (me included with some things). Frustrating when you're one trying to drive change for the better though and people resist, or you end up with more work by making changes yourself because others won't adapt.

I don't understand why it is evil. Especially as double was the accepted original norm. I am happy to accept that it has changed ( even if I don't like it) and my granddaughter accepts it is how I do it. Older generations should not be held up to ridicule because they do things the way they were taught but of course that doesn't apply to things like PC changes, which are right.

It is very hard to change lifetime habits taught when growing up and if they hurt no one it shouldn't matter. I mourn the passing of so much grammatical correctness.

Lynibis it's just times have changed. To me, it's evil because it's now not needed. I'm a perfectionist age it's (a very small) part of my job to fix mistakes like this, so it's better when nobody makes those mistakes in the first place - so they're frustrating to me. Most people won't find it as bad as I do! Appreciate it's hard to break habits, and you're not doing anything wrong using it casually - but if you worked with me and did it, you'd be doing something wrong

MeestairChrees well I won't push the point as there has been too much arguing on here lately but please let me just say it is not a mistake to anyone over a certain age who was taught this way. Because things change does not necessarily make them right or wrong. Imagine in 20 years if it were decided to once again make double spacing the 'in' thing you would feel as I do about it now being single spacing.

Btw this is nothing to do with typing as I was taught to leave the width of 2 letters at the end of each sentence when hand writing at the age of 11 by a very strict English teacher.

Lynibis I don't think we're arguing. And there's nothing wrong with debate or disagreements. I've said that in your context, it's fine. If you were dealing with content in a modern publication though (whether printed or online), double spacing wouldn't be used. And there are a few things I've seen change even in the last few years where I've had to learn to adapt.

This is another one of those generational, slipping of standards things. I was taught to touch type at school well over 50 years ago using home keys and a cover to hide your hands. Two spaces after each sentence was the correct norm of the time and no one ever questioned it. I was recently asked by granddaughter to go over a piece of her work and commented that she did not double space at end of sentences, she replied that she had never heard of it! She has a degree and masters!

I still to this day double space at end of sentences and will continue to do so until I go out feet first.

rararachel
Original Poster
a year ago

I studied typing at GCSE level so that would only be 1997-98 and was taught the same.

But as already mentioned Lynibis - it makes no difference here. A double space will be (and has been) converted to single spacing. I personally think it's justified when the full stop is closer to the sentence that it follows, I hadn't even noticed until yesterday.

I do note though (from your reply) that the single spacing after the exclamation mark (when you presumably double spaced) does tend to cramp things. I suppose the space above a full stop, which isn't above the dot on an exclamation mark, makes the spacing seem adequate.

Out of interest I just checked with a recently published book which has single spacing. Then a book published in 1933 which has double spacing. I notice the spacing between lines has increased which makes the newer format better for readability.

It's not a slipping of standards thing. It's just unnecessary in the modern world. We're not using typewriters anymore, and modern fonts are designed for one space.

MeestairChrees I tend to agree "readability" is what really matters. I don't like what is becoming a modern trend which is using all lower case letters though.

davidstockport certainly - readability is so important. I also don't like that trend. It annoys me even in TV credits - capitalise people's names! But then you have people (so many where I work) that love to capitalise words that don't need it, and that's just as bad!