Everyone has a bargain story and out the cheapest or best item they’ve ever gotten. So tell me yours haha

vanessapereira2
a month ago
What do you think of this?

I got a free 15kg bag of Eukanuba dog food from Eukanuba when my dog was a puppy. I’d say that was the best freebie I’ve ever gotten.

Love a bargain we do

As a potter head myself I can relate to this. I found all mine this way too and then the movies

Local store had a great sale, lots of Pixi skin care for £1 each (they retail at £18 each item!) needless to say I bought what was on sale!

Tails.com. Instead of the 2 weeks that is often shared on here, I got a full month's worth and only paid the same p&p! Me and my dog were both happy to say the least!!

For me I think its my Chevrolet Cruze Station Wagon. Chevrolet were leaving the UK market a few years ago and the car which was normally £17k just over was sold for £7999 which was 2014 and I'm still running it today and have never done anything to it at all really. Still the same tyres and battery, no faults and I think I've done about 21 to 22,000 miles (I'm a low mileage driver). It's basically been servicing costs, a windscreen wiper or two and mot's. Not a single fault and its decently spec'd with air conditioning, remote control mirrors and a very decent sound system. I've totally abused it too, overloading etc, as the rear seats fold down flat and I've used it as a van quite a few times fully loaded. Easy to find in a car park too as absolutely no one else has got one, I might see another Cruze about twice a year on the road. It's actually a korean car made at the Daewoo factory that became a GM factory and is similar although more reliable than the Vauxhall Astra Grand Tourer, they basically share many of the same parts, engines and the same platform. The Koreans seem to do a better job of ******** their cars together compared to the European factories. 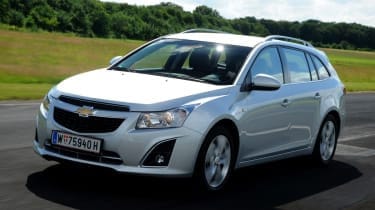 Here is the reliability info;

However it should be pointed out that is an average of all Cruze's. Mine has a basic non turbo 4 cylinder petrol engine and manual gearbox so my car has by far the most reliable and simple engine and transmission so would likely score even better for low level of faults and average repair cost.

Here is a comparison with a Volkswagen Passet;

So the Volkwagen is about twice as likely to go wrong and 50% more for average repair costs.

So for every £200 I put into the car approx on average a VW passat owner (outside warranty) would put in about £700.

Admittedly though the Cruze compared to a Japanese car may not be quite as favourable but it depends on model.

Anyway the Cruze has been a great car and because I don't use a car as much as others I see no reason to change it, I can see myself getting another 3 years out of it or possibly more.

I'll also add at one point I didn't start it for about 3 months because of covid and long covid and it started first time without issues. It seems to take a very low amount from the battery when not being used. A great car for a long mileage driver.

I’m incredibly impressed that you got it at such a low cost and that it’s last you so long with no real issues. great bargain!

vanessapereira2 Yeah its been a brilliant car and if I does develop a fault the parts are surprisingly reasonable too. GM seem to have good prices for their parts especially compared to European and Japanese firms not that I needed any yet but when I had a Vauxhall car the parts were very competitively priced and I did need a few for that.

I should add the Cruze has a sealed cooling system for the engine too so you don't have to top that up either unless you get a leak.

Thank you for making my day anything pet or dog related makes me so happy. I’m certain he’s enjoying his new home

Both my cats were free, my avatar is Conker, he is a mad arrogant little dude but I love him and my other cat Josie, sadly pet food isn't free.