Any Wine Connoisseurs Around?

I am definitely not one myself, and couldn’t ever imagine paying a lot for a bottle of red, as I usually just go for the ones on offer - I’m not fussed about brands, but I do tend to buy based on countries, often Australia and South America

what wines do you buy? Any recommendations?

hspexy
1 year ago
What do you think of this?

I've found out that you get what you pay for, although some cheap wines can be good! Unfortunately, none that come to mind right now!

A couple of nice red wines I have found are Apothic Red...This is a californian wine blend. Very nice indeed, one of my favs! At approx £10 a bottle, it's not cheap but does sometimes go on offer at around £7 a bottle. I bought a case of this from Costco when they had, which worked out at around £6 a bottle...I just had to get it! lol

I also like Jammey Red Roo which is by Yellow Tails and from Australia..around £6 a bottle for this - another fab wine!

Thanks for the recommendations - I will have to check them out. I don’t mind spending a bit more for something special on occasions

I'm definitely no expert but I agree that you get what you pay for. (Metrovski Love Jammy Roo Red too.) I really enjoy Italian reds, especially Merlots and Australian whites and tend to look at the region of origin. I'm very partial to the M&S wines that are often on offer - they're always very reliable.

Thanks for the suggestion. I do often check out the tipple section in M&S and it’s very vast, I get so bamboozled. I often buy their liquors so will have to check out their wines next

Love the odd glass or two but no expert! However I don't agree with the get what you pay for. It's more about the type of wine you like to drink. Supermarket wine buyers put a lot into selecting good wines at good prices. Sadly they don't sell it anymore but Lidl did an amazing Malbec for under £7 that won loads of awards, and I like an ice cold Tesco Pinot Grigio on a summer day for under £5. Invite a group of friends around, give them a max price to spend on a bottle, and have a tasting session ... hopefully the next day you'll remember the one's that you liked

Thanks for the recommendations. I definitely don’t want to pay over the odds for wine, as some pricy ones don’t taste good at all. Definitely worth taking part in tasting sessions

If you're picking up some wine with the supermarket shop, you might think it's economical to add a £5 bottle to the trolley rather than one that's twice the price.

But the cheaper option is a false economy compared to a £10 bottle, according to a new infographic from Naked Wines.

The retailer has revealed that the average £5 wine sold in the UK is actually only worth 37 pence, with the rest of your spend going on marketing, duty, shipping and packaging.

That means you get a much poorer quality vintage than if you splash out an extra fiver and buy a £10 bottle, which contains wine worth £2.76 - seven times the quality of the cheaper plonk.

And while less than 10 per cent of your spend on the £5 bottle goes on the wine, it's almost 30 per cent for a £10 bottle, or 35 per cent on a £20 bottle. The findings appear at first to confirm the idea that you have to spend big to get a decent wine.

But according to Naked Wines, when you spend above £30, you're not necessarily paying for quality. 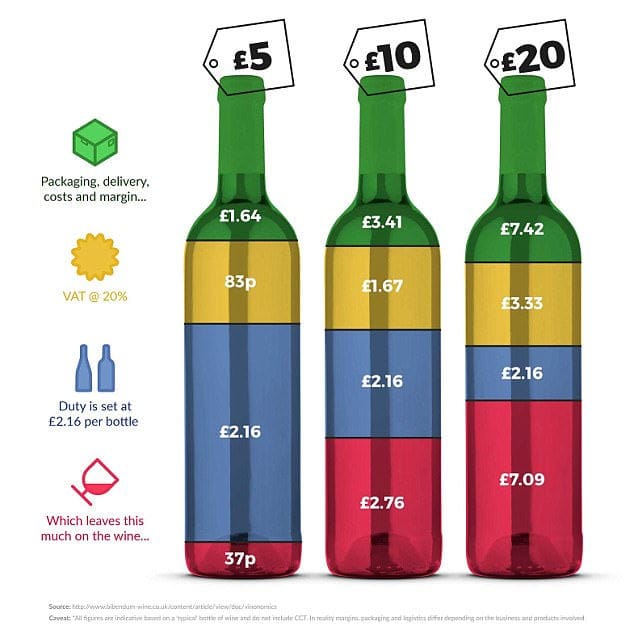 HOW MUCH ARE YOU REALLY SPENDING ON YOUR WINE?

Very interesting - thanks for sharing. It perhaps explains why a lot of people I know have started to produce their own moonshine, as they know exactly what they’re getting, probably fed up with the supermarket stuff. Cheers!

French dry red wines... And one bottle will have an effect, alcohol content 12%...

I’ve been to a few wine tastings with expensive and mid range to sample. Some of the expensive wines I didn’t like so don’t buy just to impress with label on display. Just buy the ones you like. I think it might be Majestic Wines who have bottles open to sample so go there and try for yourself. Another option is to buy the wine in the top 100 often in The Times and The Telegraph.