TSB customers have reported problems with their online banking, after weekend upgrades overran.

The bank had forewarned customers that it was carrying out upgrates between 4pm on Friday and 6pm on Sunday.

However, many reported that they were still facing problems on Monday morning, including being credited with extra money, and seeing other customers bank details.

TSB has no apologised and said that the issue has been fixed.

A spokesperson said, “We’re really sorry that some of our customers experiences problems accessing our mobile app and internet banking yesterday evening.

“Both of these services are now up and running again.”

TSB was developing a new online banking platform, which was ready to go at the weekend.

The bank was moving its customers’ data from the old platform to the new one, which was a long planned disruption that the bank had informed customers of.

However, it led to a few problems for customers.

Many said that were unaware of the changes are were caught out.

As well as this, customers experiences difficulties long after 6pm on Sunday evening, which is when TSB said things would be working as normal.

As of Monday morning, many are still complaining that they are unable to access services.

Many have now taken to social media to share their complaints.

Bec on Twitter said, “@TSB so I go to my app and have someone else’s accounts there! Serious data breach!”

Another frustrated customer, Jack, said, “@TSB this is a joke! I have incurred a charge today due to your incompetence. No phone banking. No ability to let me speak with someone, this isn’t a banks… it’s a disaster.”

Do you bank with TSB and are unable to access your accounts? Let us know in the comments.

i tried to access mine at around 7 pm last night (after the upgrade was meant to have finished) i couldn't get logged in, tried again this morning and i'm now locked out 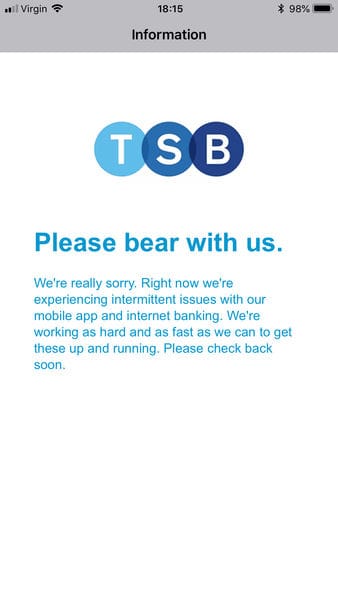 But you do have access to time travel so...!

I'm still having problems with the app