I think the best way to stop people misunderstanding then breaking all these confusing rules is to create a chatbot who can answer your questions based on your postcode. If government created one would you use it

Imnotcheap
1 month ago
What do you think of this?

Think it would be preferable if folks just learnt to read . All the info (or links to it ) is on the BBC website and local council websites for those who can be bothered to look .

For those who can't be bothered to find out there is a £100 fine waiting for the "flouters " - seems to be a reasonable inducement to me ?

You can lead a horse to water but you can't make it drink .

First time I tried looking for rules I ended up going in loops on gov.com not sure if its improved any

It might be a better idea to have notice boards in all areas (perhaps on lamp posts or in bus shelters) telling people what the relevant rules are, despite what many people think there are still many who don't have access to the internet.

They could also mention what colour bins would be emptied and on which day.

the bins I only know what colour when neighbours have done their bin. I agree with not everyone has Internet I know a few. I don't have much data and if runs out it's tuff until bill paid. We can't all afford these 60 quid contracts. Same with banks did you know can do it online easy and quicker and I tell them do you know if everyone changed to online you ain't got a job.

Ann1984 I wouldn't have a £60 contract either, I don't even want a smartphone. IF I stray too far from my laptop - I'll wait until I get home (unlimited data). I still use pay as you go for my mobile phone, a penny a minute.

I was around when mobile phones were only science fiction.

Ann1984 Superdrug do an Unlimited SIM for £20 a Month. https://www.superdrugmobile.com/our-plan?gclid=Cj0KCQjw28T8BRDbARIsAEOMBcyDpiP80bZHrW4VkbX9oUmmgsN-zAf7nbgXHIBJXAvvR_XhhQ8Xtp8aAniNEALw_wcB&gclsrc=aw.ds

RichardDoolin am happy paying 6 quid for 4gb enough for me

I think it would be best if you all threw off your masks embraced one another , kissed , hugged and generally let the " Virus " run it's course .. I am a vunerable by the way !!

The last time a very dangerous plague ran its course (well back then they didn't know too much about how to control it) It is estimated that between a third and a half of Europe's population was killed by it.

davidstockport I'm sure that's the idea

Do you have anyone depending on you

I'm not sure a chatbot is the answer. For one thing, it would take a while to build. For another, there'd be a lot of people using the chatbot all at once. For another thing, the chatbot for each would have to be updated with rule changes and there would probably be a lag between new rules coming into force and the chatbot being updated. It might be better if they created a Level 1 chatbot, a separate chatbot for Level 2 and a separate chatbot again for Level 3 and then people in different areas could look up the rules in their areas that way. The people themselves would still have to take some responsibility for looking up what tier their town is in and the robots wouldn't have to be updated so often.

Of course, they could just dump the robots entirely and employ some of the newly unemployed humans to staff a helpline for each town that residents could phone to find out the rules. I don't think it's fair to say just read the instructions because some people are print disabled or less confident in English. It would be better to have a phone-based option for those who prefer not to read (which helpline would create work-from-home employment in each town) and also have a textphone option for the Deaf too.

Pennies for your thoughts.

That would solve grey areas. If people are unsure they go with what they want

Imnotcheap You're so right. People do what they want to do, period. The trick is going to be leading people to want to follow the rules.

One of the things they could start with is showing a map with shading that reflects what the government postcode site says. My area is the lowest tier (1) on the map but when I request the postcode details - I am in tier 2.

It doesn't matter much to me anyway though as I have only been out to a shop twice since March.

Sounds really confusing to be told one thing by one source and then something else by another source. You're so right about the drunken party in the brewery. So sorry you to have to go through this! 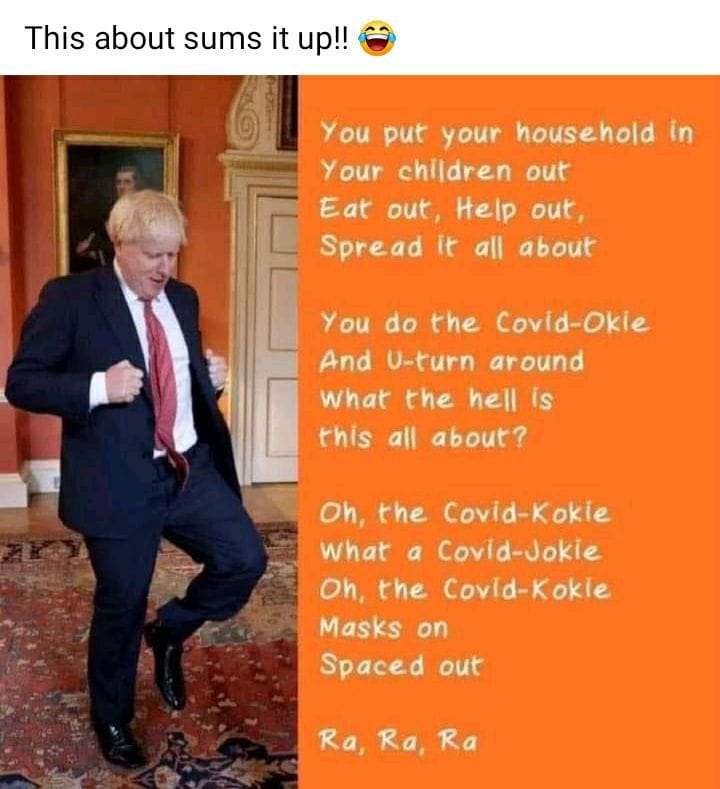 I love it will have to show family this 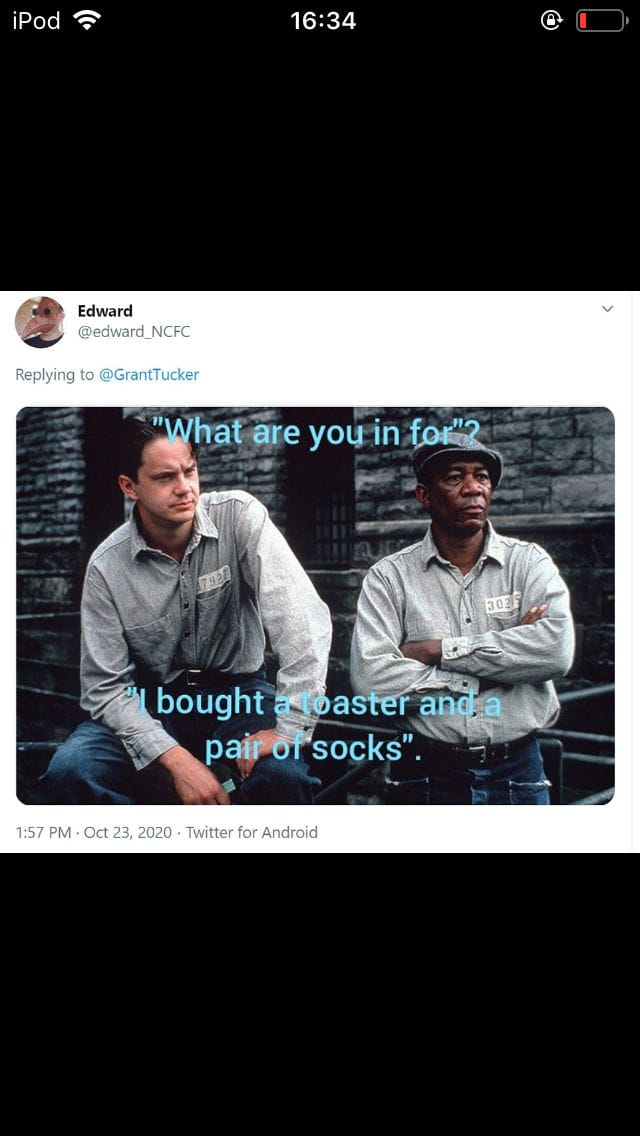 Not as good as last one but still 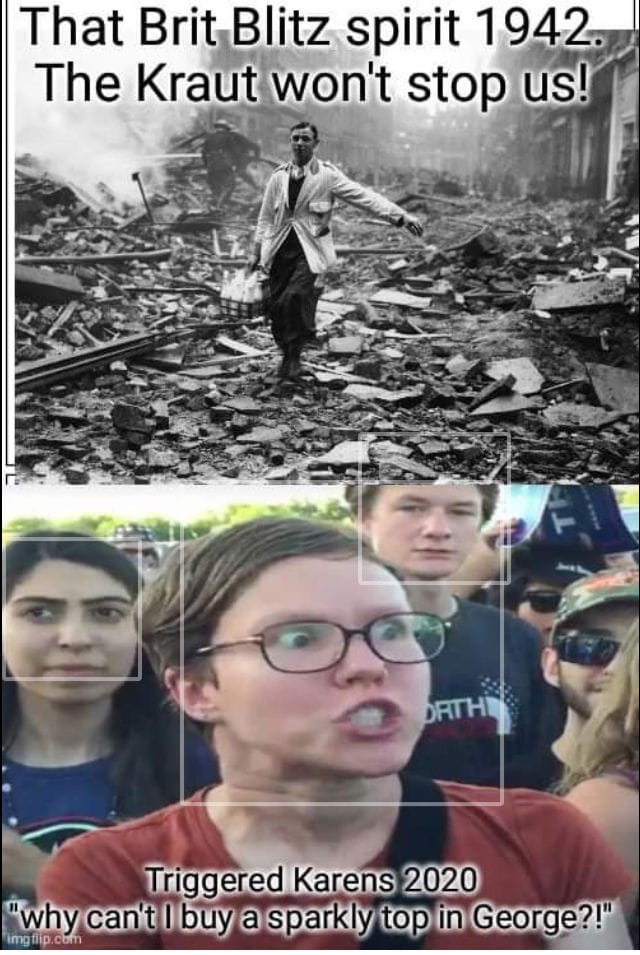 Ann1984 Yep. Wife had to shut the shop down and can't get any government assistance because it's a start up.

It's really making her sad and there's nothing I can do to help.

The worst thing for her is that she has to put up with me and Harvey for 16 days. 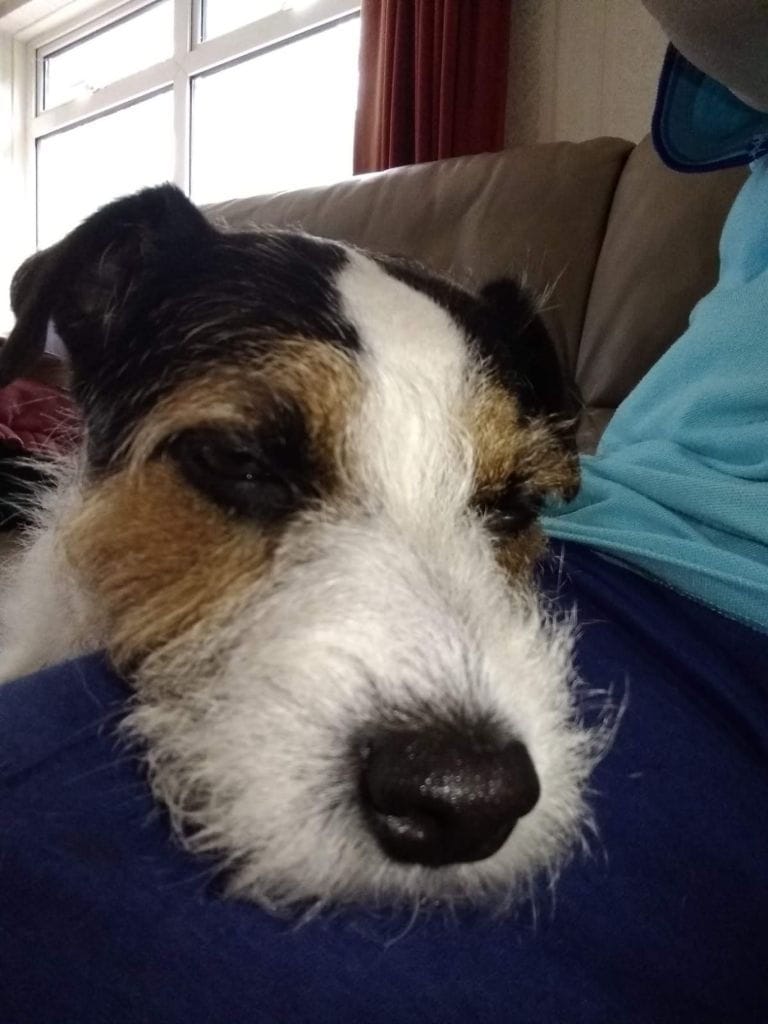 TheChimp ah he’s lush can’t she Offer delivery that’s what some are doing. Just had Tesco delivery and the staff not happy can’t blame them, the abuse they going to receive .

TheChimp ah never keep looking mine were like that but they randomly released slots. It was around 3pm I grab this one on Wednesday

If such a chatbot could be made to work well then maybe its a good idea but when even the people who are setting the rules often get them wrong when they are asked then there is no hope. Beside, rather than the government paying a private company millions of pound to produce a chatbot like this I'd rather they spent it on free dinners for those that need them during holidays instead