There is something that most of these cases have in common, a boot/shoe is always found somewhere from the victim, but the body is nowhere to be found.

Some say aliens, bigfoot, dogman, cannibals, drug growers, cults, a special secret organization are who/what is behind it.. just theories.

Here's one of the many cases of missing people.

Now, I wonder how this compares to missing persons in U.K., I guess it's smaller? Just an assumption.

PhilipMarc
16 days ago
What do you think of this?

It sounds like a lot, but in fact isn't. It's just more fake news.

Where do you get this stuff from?! And do you yourself believe it Rockman ?

In fact over a thousand people have gone missing (not found) in U.S. National Parks since 1916 (in over a hundred years!)- that's only about 10 people a year, NOT thousands in recent times like your headline implies.

10 people a year missing in more than 84 million acres (a massive area almost three times the size of England).

Throw in a few suicides, a few wild animal attacks, a few bad falls, a heart attack or two, a murder or two, and some exposure to extreme weather, and you're done.

I just don't get why people spread this kind of nonsense, without doing any fact checking - it would only take a couple of minutes on Google.

It's not "fake news" but I'm not going to argue with you, tbh.

Rockman I just did look up Missing 411.

That’s exactly what I mean - a few people a year go missing in a massive area. So what?

And the headline is thousands go missing? That’s just BS.

Whether this is true or not, I can't say but here is a true story for you for all who doubt that large numbers of people go missing. Back in the 90s, it came to light in my home town that over 100 teenage girls who were in the care of the local authorities staying at approved school for girls had just vanished. This came out as a result of an investigation that was quickly halted and then the 'suicide' of a serial killer who you will all know. The serial killer and other people were talking about this care home which linked the local council and local police to the serial killer. There was no investigation into the approved school or local authoritiy. In fact, this facility is still in use for troubled teens all these years later. What happened to those girls? The serial killer was suggesting that there was trafficking going on and he was part of the network that delivered young women and girls. He was found hung in his cell not long afterwards and the investigation was shut down quick. I know all this for fact as I a) worked for a local radio station at the time b) One of my best friend's dads was very high up in the police force dealing with this case and my friend was coming to school and telling us everything, c)another friend's dad was a policeman digging up the bodies. Here in my hometown, everybody knows that there was a lot more to the case and things got covered up. there has been documentaries about this case and someone this approved school will be mentioned.

I forgot some other links to this case. The serial killer's approved social worker to help him with his LD was the mum of one of kids in my school year. The serial killer's brother (who also ended up hanging) lived next door to my twin school friends. yeah, I knew a lot about this case when it was going down.

That's interesting. What is the name of the approved school, and what town is it in?

Over what period of time did these girls vanish?

Can you provide a link to any reliable sources that covered the story? If it's true it would be a major news item.

Johnny It was not a major news item. It was part of a huge cover up. https://theneedleblog.wordpress.com/operation-greenlight/south-west-england/gloucestershire/jordans-brooke-house/ here's a blog story but it was over 100 not 22 girls as reported here. It was also part of a documentary on the west's I watched but I can't remember what channel it was on. ITV did a documentary on the west's that was cancelled last year but then put out at a later date. Didn't mention any of this. It was stopped due to legal reasons. If you ever see a fred west story on the daily mail look at the comments and you'll see people from gloucester and cheltenham commenting on what a cover up it was. https://www.bbc.co.uk/news/entertainment-arts-47087454

ShellyAnn Thanks. If the figure of over 100 girls missing is correct (rather than the known about 22) that number cannot have been plucked out of thin air. Someone must have counted up those still missing (and the reports of those girls missing) and have all their names.

Is there such a published list do you know?

Without one the 100+ figure doesn't really stand up to scrutiny. I believe those people claiming the figure was over 100 would definitely put that list online if was true, even many years later.

Johnny Whatever the full number, still what on earth was going on there? Those girls were in the care of the authorites and where have they gone? I never followed the west case once West was dead and my friend was told by her father she couldn't talk about it any more. I was teenager when this all broke. All news dried up. The reporters at the radio station I worked for (saturday job; I was at school) went quiet too. I watched a documentary last year on mainstream tv and the ITV documentary that aired eventually and that was the first time since I was a teenager and it all happened that I actually watched anything to do with West, so I haven't followed it at all, so no, I don't know of a list of names. Some of those names might be confidential anyway due to data protection. The council don't list for the public those teenagers and adults under their services. I have no idea who the girls were. I just know like the rest of the people of gloucester there was a lot more to this but the full story, no, I don't know that.

https://www.independent.co.uk/news/uk/more-questions-than-answers-1583744.html Again the number 22 is used. This case was an open book in Gloucester. For eg, the footage of police carrying the body parts out in plastic tubs is faked. All body parts were removed at night. West went with the police to his crime scenes and told them were the bodies were. There was a deal between the press and the police that they would get the bodies at night under darkness with fred there and that they would stage the footage for the news. In some of the scenes my school friend's dad can be seen carrying a green plastic tub but it was really empty. Her dad quit the police force not long after West's death.

here's proof for you that the news does get faked: I was in a fake news story! When I was doing my A levels, there was a national news story about a teenager girl that committed suicide due to stress. I don't know if it was my school's idea or the regional tv news' idea to stage a story about counselling. The tv crew showed up at my school and interviewed a teacher who was said to organise and manage these counselling sessions we teenagers it was said received. There were NO counselling sessions ever at my school. They also brought in 2 ladies from a very well known counselling organisation. A session was staged with the head boy, girl, and all the other trusted kids from my year, but the tv crew decided there wasn't enough kids in the session, so my friend and I were walking past the classroom to go the canteen. We are called in and asked to join. We told a few things to say by the tv reporter and also each of use in turn was asked to say what relationships mean to us. It lasted about 15 mins. Then the tv crew went and it was aired that evening on the regional news. It as all fake! My school was happy to take part, the counselling organisation, the tv crew and us kids (we were about 17/18 at the time). Our families knew it was fake. I look back at that and think wow, that was fake news. We were happy to go along with it as we got on tv. My speaking part was used in full. Well if that was faked, what else is faked on the news?

here's a photo of some body parts being brought out with all the press there but no body parts were brought out in daylight. This is staged. This is not my old school friend's dad in this photo. I had a look on youtube as normally that footage with him in is there as part of west documentaries. rose west was a madam and was running a prostitute ring out of cromwell street. Things get messy because the police were her customers. The jordan brook house girls were recruited and worked there. Once West started talking about this he found hanging. He also talked about bristol and trafficking girls to there. West's audio was recorded and I have heard it. It was part of the documentary I watched last year that was very different to the one that did go out in the end on ITV. 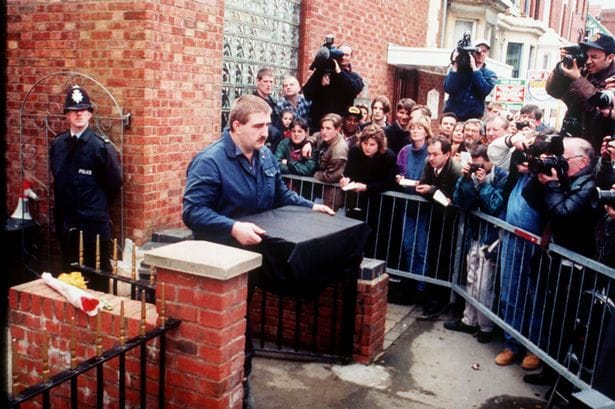 the official word is that the number of bodies dug up is all the west killed but things were getting messy. Also the police had run out of money as an investigation of this nature had used up all the cash and government wouldn't grant them extra funds. then west was found hanging, so that was that. here's a link to the a news report about the police using west's house as a brothel. https://www.irishtimes.com/news/inquiry-completed-into-claim-that-police-used-west-house-as-brothel-1.60815