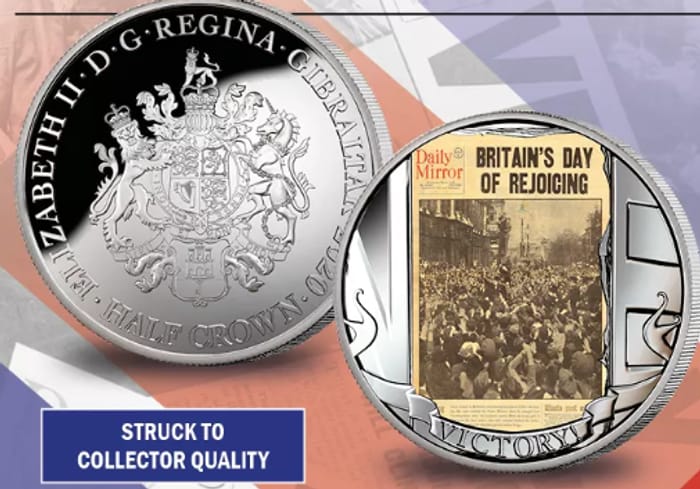 Available from The London Mint Office
£2.50
116 people like this deal
Get Deal

We have partnered with The London Mint Office to bring you this great deal to lift your spirits right now!

Get a 75th Anniversary of VE Day "The Headline" commemorative half crown coin for free when you cover the £2.50 postage charge.

Only one coin per household. 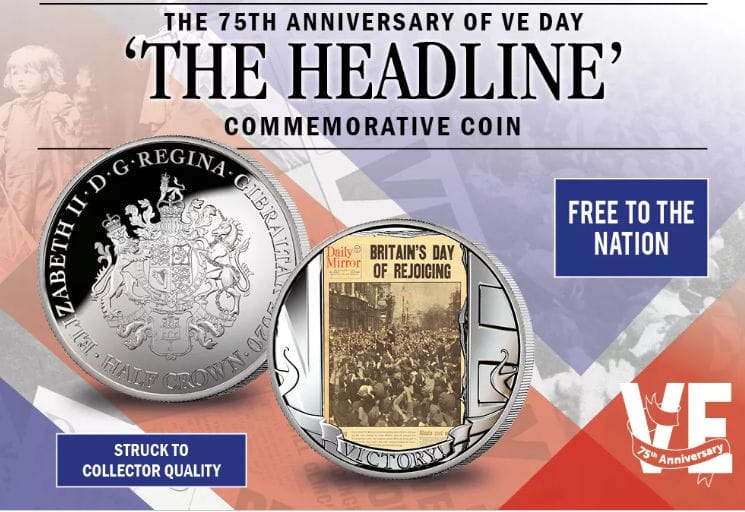 On May 8th 1945, people around the world were united in celebrating Victory in Europe Day.

To celebrate the 75th Anniversary of this defining moment in world history, The London Mint Office is proud to offer a new commemorative coin.

In Great Britain, every British newspaper proudly proclaimed the same message, Victory, the war in Europe was over. 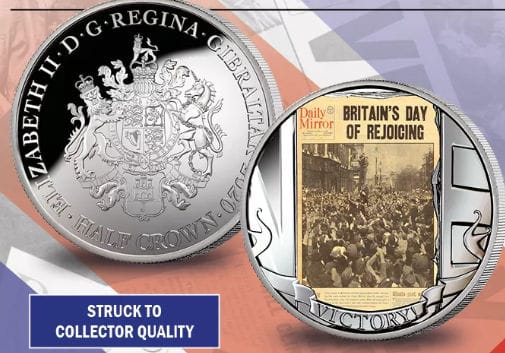 Struck to a collector quality finish, this brand new coin displays the headline of The Daily Mirror, which declared “Britain’s Day of Rejoicing” with a picture of a jubilant crowd, reflecting the happiness and relief that the war in Europe was over at last. 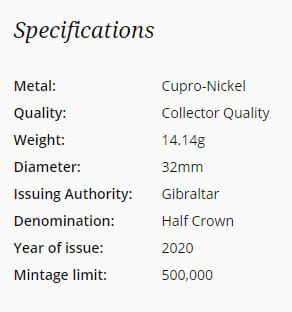 What do you think of this The London Mint Office deal?

Is this the real deal. Because there are so many coins on the market. And it's hard to find the right one. Going to check it. Thank you.

Lovely, thank you! Bought one for my dad as he collects coins

I ordered from the royal mint office to buy a coin for a friend, and their service is appallingly slow. Any updates are ignored until persistent asking. I still haven’t received my order which was placed end March. I would be cautious against them, unless you are willing to wait.

salss09 this isn't the Royal Mint, coin in the deal isn't official

They also have the forces sweetheart Dame Vera Lynn limited coin available free plus £2.50 postage limitation of one per household

As a curio fine, but remember these are not real coins and have no more value than that you paid also that the makers have nothing to do with the Royal Mint

I shall tell my friend about this, she collects coins

Why is the postage for these coins always so expensive? They're worth 50p - £1 at the most.

RegularComper90 because they probably overstate the postage costs to cover costs of making the coin or even make a profit.

That's how they make a fortune, coins probably worth 10p, think of the profit from postage, that's why it's always high

These coins are nice to collect. They're worth hardly anything but for £2.50, it's a cheap hobby really!

Thanks for sharing my son collects coins so he will love this.

Another coin to add to my free collection thanks xx

Thanks for sharing this , I know it might take a while for delivery as I am guessing people will want to commemerate this momentous event . Even so would love to be able to say thank you to the unsung heroes of 75 years ago who gave us our freedom .

I’ve ordered one for my Nan she was 10 when the war started. thank you

Great memory well worth it thanks for sharing this .

This is amazing & gonna buy one for my dad. Thank u for sharing

Wow! That is such a great offer! Thank you so much for sharing this deal for everyone to see, I have had a look online and I have just ordered mine

My daughter collects coins and would love to have this in her collection. Thanks for sharing

The Royal Mint is in Pontyclun, Wales not London, and are issuing a £2 REAL coin of the realm which has actual monetary value in the UK. I’m getting that not this as this one can only be a memento and not a genuine UK coin for a collector.